Moon of Alabama: Trump should fire Brennan, Comey and others


Either Trump Fires These People Or The Borg Will Have Won 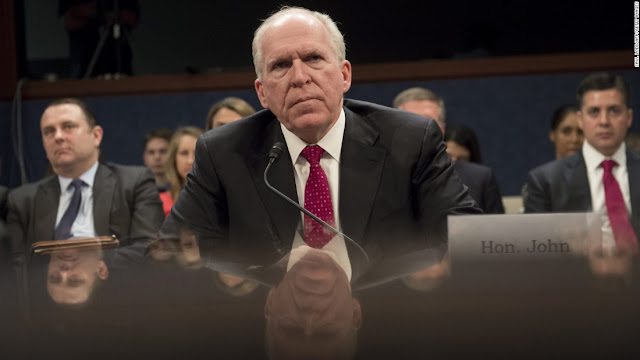 President's Trump successful summit with President Putin was used by the 'resistance' and the deep state to launch a coup-attempt against Trump. Their minimum aim is to put Trump into a (virtual) political cage where he can no longer pursue his foreign policy agenda.

One does not have to be a fan of Trump's policies and still see the potential danger. A situation where he can no longer act freely will likely be worse. What Trump has done so far still does not add up to the disastrous policies and crimes his predecessor committed.

The borg, financed and sworn to the agenda of globalists and the military-industrial-media complex, has its orders and is acting on them. The globalists want more free trade agreements, no tariffs and more immigration to prevent higher wages. Capital does not have a national attachment. It does not care about the 'deplorables' who support Trump and his policies:

[P]olls show that Trump appears to still have the support of the bulk of Republican voters when it comes to tariffs. Nearly three-fourths, or 73 percent, of Republicans and Republican-leaning independents who responded to a Pew Research survey out this week said they felt increased tariffs would benefit the country.

His 'isolationist' economic policies make Trump an enemy of the globalists:

Donald Trump is, indeed, a kind of traitor to the Washington Consensus, a hyper-militarized capitalist utopia of corporate dominated global supply chains that doubled the international wage-slave workforce in the last two decades of the 20th century and herded these desperate billions into a race to the bottom. The leadership of both corporate parties conspired to force U.S. workers into the global meat-grinder.

The weapon industry and the military recognize that the 'war of terror' is nearing its end. To sell more they need to create an new 'enemy' that looks big enough to justify large and long-term spending. Russia, the most capable opponent the U.S. could have, is the designated target. A new Cold War will give justification for all kinds of fantastic and useless weapons.

Trump does not buy the nonsense claims of 'Russian meddling' in the U.S. elections and openly says so. He does not believe that Russia wants to attack anyone. To him Russia is not an enemy.

Trump grand foreign policy is following a realist assessment. He sees that previous administrations pushed Russia into the Chinese camp by aggressive anti-Russian policies in Europe and the Middle East. He wants to pull Russia out of the alliance with China, neutralize it in a political sense, to then be able to better tackle China which is the real threat to the American (economic) supremacy.

This week was a prelude to the coup against Trump:

Former CIA chief John Brennan denounced Trump as a “traitor” who had “committed high crimes” in holding a friendly summit with Putin.

It can’t get more seditious than that. Trump is being denigrated by almost the entire political and media establishment in the US as a “treasonous” enemy of the state.

Following this logic, there is only one thing for it: the US establishment is calling for a coup to depose the 45th president. One Washington Post oped out of a total of five assailing the president gave the following stark ultimatum: “If you work for Trump, quit now”.

Some high ranking people working for Trump followed that advice. His chief of staff John Kelly rallied others against him:

According to three sources familiar with the situation, Kelly called around to Republicans on Capitol Hill and gave them the go-ahead to speak out against Trump. (The White House did not respond to a request for comment.) Senate Majority Leader Mitch McConnell and House Speaker Paul Ryan held televised press conferences to assert that Russia did meddle in the election.

Others who attacked Trump over his diplomatic efforts with Russia included the Director of National Intelligence Daniel Coats who used an widely distributed interview for that:

The White House had little visibility into what Coats might say. The intelligence director’s team had turned down at least one offer from a senior White House official to help prepare him for the long-scheduled interview, pointing out that he had known Mitchell for years and was comfortable talking with her.


Coats was extraordinarily candid in the interview, at times questioning Trump’s judgment— such as the president’s decision to meet with Putin for two hours without any aides present beyond interpreters — and revealing the rift between the president and the intelligence community.

Speaking at the Aspen Security Forum in Colorado, Wray said he stood by his view that Russia meddled in the 2016 presidential election in some capacity and that the threat remained active.

A day later Secretary of Defense Mattis also issued a statement that contradicted his president's policy:

Secretary of Defense James Mattis took his turn doing the implicit disavowing in a statement about new military aid to Ukraine:

"Russia should suffer consequences for its aggressive, destabilizing behavior and its illegal occupation of Ukraine. … The fundamental question we must ask ourselves is do we wish to strengthen our partners in key regions or leave them with no other options than to turn to Russia, thereby undermining a once in a generation opportunity to more closely align nations with the U.S. vision for global security and stability."

Pat Lang thinks that Trump should fire Coats, Wray and Rosenstein, the Deputy Attorney General who is overseeing the Mueller investigation.


My advice is to spare Rosenstein, for now, as firing him would lead to a great uproar in Congress. The Mueller investigation has not brought up anything which is dangerous to Trump and is unlikely to do so in the immediate future. He and Rosenstein can be fired at a latter stage.
But Wray and Coats do deserve a pink slip and so do Kelly and Mattis. They are political appointees who work 'at the pleasure of the President'.


The U.S. has the legislative and the judicial branch as a counterweight to the president who leads the executive. The 'deep state' and its moles within the executive should have no role in that balance. The elected president can and must demand loyalty from those who work for him.


Those who sabotage him should be fired, not in a Saturday night massacre but publicly, with a given reason and all at the same time. They do not deserve any warning. Their rolling heads will get the attention of others who are tempted by the borg to act against the lawful policy directives of their higher up.


All this is not a defense of Trump. I for one despise his antics and most of his policies. But having a bad president of the United States implementing the policies he campaigned on, and doing so within the proper process, is way better than having unaccountable forces dictating their policies to him.


It will be impossible for Trump to get anything done if his direct subordinates, who work 'at his pleasure', publicly sabotage the implementation of his policies. Either he fires these people or the borg will have won.