Imran Khan won yesterday's elections in Pakistan. He is an unusual politician and his political program is laudable. The task he is taking on is difficult and fraught with danger:

Imran Khan has claimed victory for his Pakistan Tehreek-e-Insaf party (PTI) in an historic election for Pakistan. The PTI represents a populist swing away from the legacy mainstream parties PML-N and PPP that both fared poorly during the election. Additionally, religious extremist parties fared particularly poorly compared to the previous two elections and also when contrasted with the expectations that many theocratic parties set for themselves prior to polling day.

Lastly, the deeply controversial MQM ended up losing both seats and electoral momentum in its Karachi heartland, surrendering its erstwhile momentum to PTI.

Likewise, the incumbent PML-N not only fared poorly in the national vote in their traditional Punjab stronghold but even in the Punjab assembly election, Imran Khan’s PTI has proved formidable. Finally in Khyber Pakhtunkhwa which since 2013 has been governed by a PTI led provincial council, women were able to cast their votes for the first time. As was expected PTI heavily dominated throughout Khyber Pakhtunkhwa.

Imran Khan is an interesting character. He was born in 1952 into an affluent Pashtun family with an anti-colonial tradition. He was educated in Britain. After graduating from Oxford he excelled as a professional cricket player. In 1992 he won the Cricket World Cup for Pakistan as captain of the team. That made him a national hero but the high life also gave him a reputation as womanizer and playboy. 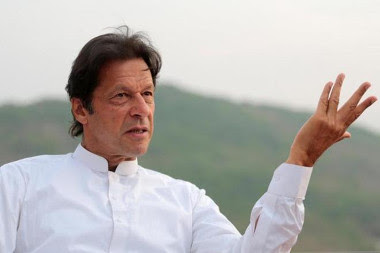 His 2012 talk with Julian Assange (vid) demonstrates that he is way more than that. In 1996 he founded his political party and slowly moved it into a winning position. The PTI rule in Khyber Pakhtunkhwa, the poor and war-torn Pashtun state next to Afghanistan, was surprisingly successful.

Pakistan was long ruled by the military and several rich clans which used their political parties to enrich themselves. There is no evidence that Imran is of such a type.

The losing parties claim that the elections were rigged by the Pakistani military. During the campaign the military somewhat put its finger on the scale. It allegedly pushed some candidates into changing their party affiliation and interfered with some media. But the elections themselves went off mostly peaceful, the EU observer mission seems largely satisfiedwith the process and the result is consistent with earlier polls and predictions.

Imran campaigned on a social-democratic and anti-corruption platform. His victory speech(scroll down) emphasized his concern for the poor:

Pakistan should have that kind of humanitarian state, where we take responsibility for our weaker classes.

The weak are dying of hunger. I will try my best – all of my policies will be made to raise our weaker classes, for our labourers … for our poor farmers, who work all year and get no money … 45 percent of children have stunted growth, they don’t reach the right height, or their brains don’t develop.


...No country can prosper when there is a small island of rich people, and a sea of poor.

Pakistan has long been a puppet state of the U.S. and its Saudi wallet. It was abused for the U.S. proxy war in Afghanistan against the Soviet Union and never recovered from that. The corruption and religious fanaticism that came with that war did not leave when it was over. Since the 2003 U.S. invasion of Afghanistan the country's military used it as a racket. It demanded large payments for enabling the necessary U.S. transports through Pakistan while at the same time supporting the Taliban resistance against the U.S. occupation. In the end the U.S. lost the war. Imran Khan has led protests against the U.S. war of terror and its drone strikes in Pakistan and elsewhere. In his victory speech he touched on the unequal relation:


We want to have open borders with Afghanistan one day.

With the US, we want to have a mutually beneficial relationship … up until now, that has been one way, the US thinks it gives us aid to fight their war … we want both countries to benefit, we want a balanced relationship.

The Trump administration will probably be okay with Imran's position, after trying to sabotage him. Already U.S. media describe the election as 'disputed'.

Trump demanded that Pakistan stops to "destabilize Afghanistan" and held back some money it was to receive. But Trump also wants to leave Afghanistan. Yesterday a State Department official met with Taliban representatives in Qatar to restart peace negotiations. The Trump administration, like others before it, will soon learn that no peace can be found in Afghanistan without Pakistan's acquiescence.

China gives us a huge opportunity through CPEC, to use it and drive investment into Pakistan.

Pakistan's most fragile relations are with its neighbor India, especial over the Muslim majority Kashmir valley over which India harshly rules and which is also the source and weak point of Pakistan's lifeline, the Indus river. The two nuclear states have fought each other several times. The always fraught relations with India are used by the Pakistani military to justify the perks of its officer corps and its oversized role in Pakistan's politics.

Imran Khan offered new negotiations with India: "If India’s leadership is ready, we are ready to improve ties with India. If you step forward one step, we will take two steps forward." But the question is if the military will let him do that. Indian analysts are skeptical:

Imran can contribute neither to the improvement nor the deterioration of Pakistan’s relations with India. Pakistan’s prime ministers have long lost influence, what little they had three decades ago in the immediate aftermath of Gen Zia-ul-Haque’s death, over the direction and shape of Islamabad’s foreign policy. Over these decades, Pakistan Army has gained absolute control over important national security issues relating to Afghanistan, United States, China, Jihadi forces and India.

Imran Khan can not take on the Pakistani military - at least not now. To clean up the endemic corruption and to solve the basic economic problems of his country are already huge tasks. If he proves to be successful with those he may get a chance to slowly wrestle back control over foreign policy form the military's oversized power.

The election of Imran Khan is a break with Pakistan's oligarchic past. As he wants to implement his anti-corruption and social programs he will have to fight an entrenched establishment that does not mind playing dirty. He may well win that fight but only if he continues to receive support from the military. For that he will have to follow the Generals' demands on foreign policy. Only a second term in office would give him the standing to tackle that relationship.


For now he is Pakistan's best chance. I wish him luck.


The voice of Empire says he "claimed" the election