At least 20 people killed after collapse of dam in Laos

Laos dam collapse: Many feared dead as floods hit villages
At least 20 people have been killed and more than 100 are missing in flooding following the collapse of an under-construction dam in south-east Laos. 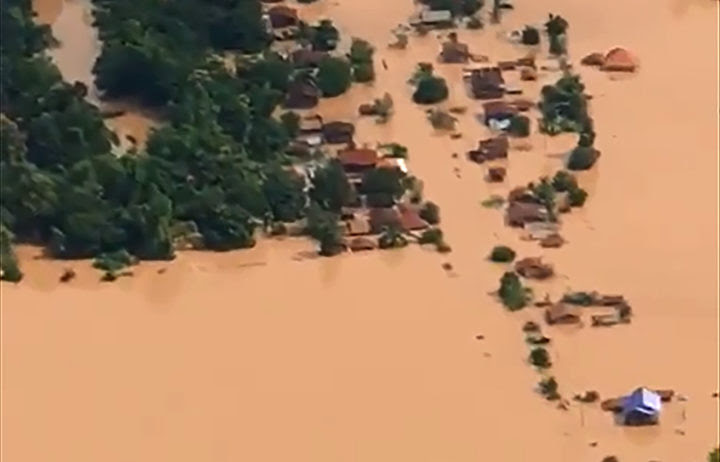 The collapse at the hydroelectric dam in Attapeu province late on Monday sent flash floods through six villages.

More than 6600 people have been made homeless, Lao News Agency reported.
Officials have been trying to rescue stranded villagers by boat.

Local authorities have appealed to government bodies and other communities to provide emergency aid such as clothing, food, drinking water and medicine.

One local Attapeu official told AFP that there was no phone signal in the flooded areas, adding to communication problems.

Attapeu is Lao's southernmost province, and borders Cambodia and Vietnam.
It is known for agriculture, rich trees and wood-based industries - and hydropower is one of its major exports.

How did the dam collapse?

The dam that collapsed is part of the Xe-Pian Xe-Namnoy hydroelectric power project, which involves Laotian, Thai and South Korean firms.

SK Engineering & Construction, a South Korean company with a stake in the project, said in a statement that "partial damage" was discovered at the dam on Sunday evening.

Emergency repairs that night failed because of heavy rain and damaged road links, and by Monday there was further damage to the dam, and villages downstream were told to evacuate, the statement said.

Ratchaburi Electricity Generating Holding, the main Thai stakeholder, said in a statement that the dam had collapsed on Monday after "continuous rainstorm(s)" caused a "high volume of water to flow into the project's reservoir".

As a result, the dam "was fractured" and water "leaked to the downstream area and down to Xe-Pian River" about 5km away.

The government in Laos has launched an ambitious dam-building scheme to become the "battery of Asia".

Laos sits on the Mekong River and its tributaries - a perfect location for hydroelectric power.

The country had 46 operational hydroelectric power plants in 2017, and 54 more under construction.

Laos already exports two-thirds of its hydropower, with electricity making up roughly 30 percent of all Laotian exports.
- BBC