Is Trump planning to strike Iran next month?

Is Trump planning to strike Iran next month? Here’s what you need to know
Darius Shahtahmasebi 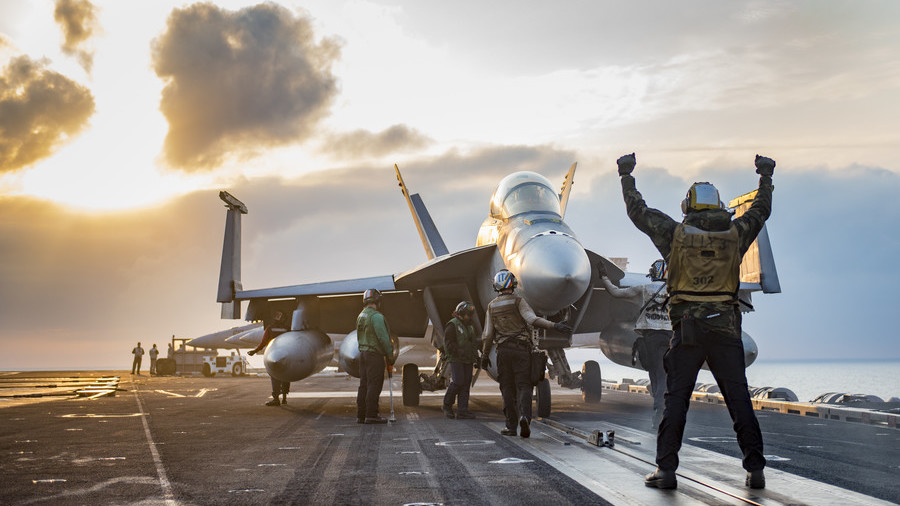 A recent report claims the American President is looking to bomb Iran in yet another violent act of international aggression by the US.

At the end of last week, a bombshell report released by the Australian Broadcasting Corporation (ABC) claimed that the Trump administration is readying to bomb Iranian nuclear facilities as early as next month, further claiming that Australia may assist in identifying possible targets. The report cited senior figures within the Australian government, Australia being one of the key players in the so-called Five Eyes intelligence alliance which also includes the UK, Canada and New Zealand.

The report followed an infamous, all-caps tweet from Trump himself, in which he threatened Iranian President Hassan Rouhani that he will “suffer consequences the likes of which few throughout history have ever suffered before.”

Never mind that just the act of publishing this tweet alone is a clear violation of Articles 2(3) and (4) of the UN Charter, particularly the part that reads “All members shall refrain in their international relations from the threat or use of force against the territorial integrity or political independence of any state”, but the fact that the mainstream media decided not to hold these dangerous actions to account is concerning (though not surprising).

Since the report’s release, Mattis openly denied the veracity of the story and its contents, describing it as “fiction.”

“I have no idea where the Australian news people got that information,” Mattis told reporters while being quizzed on the report. “I’m confident it is not something that’s being considered right now, and I think it’s a complete — frankly, it’s — it’s fiction.”

Australia’s Prime Minister Malcolm Turnbull also dismissed the report, saying that he had “no reason” to believe that an attack was imminent, further calling the report “speculation.”

Even Trump has repositioned his verbal attack on Iran, stating to a convention in Kansas City that “I withdrew the United States from the horrible one-sided Iran nuclear deal, and Iran is not the same country anymore…We’re ready to make a deal.”

So is the report a fabrication? Is it speculation, based on the ill-informed word of anonymous senior government officials? Or is it another stunt taken right out of Trump’s newly released playbook on how to deal with adversarial states?

Bear in mind that reports also previously emerged claiming that the Trump administration had been weighing up a limited strike plan on the Democratic People’s Republic of Korea (DPRK), all the while Trump’s Twitter feed was engaged in a war of its own with North Korean leader Kim Jong-un, following which no such strike ever eventuated. Not long after, the Trump administration and the North Korean leadership then agreed to begin a route on a diplomatic pathway, to which much credit was given to Donald Trump himself. Starting to sound a bit familiar?

Either way, we don’t know at this stage what to expect tomorrow, let alone next week or next month. With someone like Donald Trump at the helm, all bets are off the table. Even if we should expect a strike to be imminent, it seems there is little that can be done to prevent the attack before it is launched as the rest of us simpletons sit and wonder how beautiful that chocolate cake really is.
So let’s talk about what we do know instead.

We know that Donald Trump unilaterally pulled the US out of the Iranian nuclear accord, also known as the Joint Comprehensive Plan of Action (JCPOA) in May of this year. We know that in doing so, he warned all countries to stop buying Iranian oil by November 4, this year, reimplementing the sanctions that the JCPOA was supposed to have lifted off Iran’s shoulders. We know that there is little Europe can do to bypass these sanctions to maintain its economic relationship with Tehran, even if it tried.

We also know that in response to these looming sanctions, Tehran has threatened to block the Strait of Hormuz, through which 30 to 35 percent of the world’s maritime oil trade passes. We know that Iran is technically within its right to do so, and considering even a partial closure would be enough to rattle the global financial markets this threat should not be taken lightly, especially as desperation appears to plague Iran’s economic situation. Aside from developing its own cryptocurrency, there is little hope for Iran to bypass Washington’s economic warfare without threatening the US or its allies in the process.

According to CNN, the US is now considering the military options available to them to keep these vital waterways open, most likely using its proxy forces to do its bidding on its behalf, such as Saudi forces. Even Iran’s ally, China, has essentially warned against Iran’s pending closure of the passage, even as it has carried out joint naval exercises near the Strait with Iran in the past.

We also know that Islamic Revolutionary Guards Corps (IRGC) Major General Mohammad Hossein Bagheri has warned that Washington’s economic offensive is only a prelude to the real goal of the Trump administration, being a military attack.


We know that a military attack is most likely on the table in some way, shape or form, as Donald Trump appointed infamous mad man John Bolton as his national security advisor, who promised a regime change would take place in Iran by the end of this year. This is the same mad man that wrote an op-ed in the New York Times entitled“To Stop Iran’s Bomb, Bomb Iran.”

We also know that the US is planning to revive the so-called “Arab NATO” in an effort to directly confront Iran, with the White House openly confirming that it has been devising the concept of the alliance with its “regional partners now and have been for several months.” Currently known as the Middle East Strategic Alliance (MESA), its entire purpose appears to act as a buffer against “Iranian aggression, terrorism, extremism,” according to a spokesperson for the White House’s National Security Council.

That’s right – Iran, currently bombing or invading no one, as well as being one of the most heavily engaged entitiesdefeating terror groups such as ISIS, is somehow the source of aggression, terrorism, and extremism in the Middle East region which actively needs confronting.

Tying these developments together is an incident that took place relatively quietly last Thursday, which saw a huge tanker with a shipment of oil from Saudi Arabia bound for Egypt damaged by a missile attack from the northern Bab el-Mandeb strait in the Red Sea which was launched by Yemen’s Houthi. Western media, in tandem with Saudi and Israeli media, have labelled the Houthi as an Iranian proxy. However, as I have pointed out consistently over the years, there is actually very little concrete proof of any extensive Iranian involvement in Yemen despite this relentless propaganda. Regardless, it should be clear where this rhetoric is headed in the long run.

We know that if the US cannot get to Iran directly, it has devised a plan to scale back its influence throughout the Middle East. We know that the US has taken over one-third of Syria, including some of its most strategic areas, as a means of countering Iran’s expansion in the region. We also know that this has been the goal all along underpinning Washington’s involvement in the country, under the disingenuous guise of fighting ISIS. According to CENTCOM commander U.S. Army Gen. Joseph Votel, the US military base in al-Tanf, Syria, provides opportunities for the US to indirectly influence Iranian activity “by the pursuit of our ongoing operations.”

How long, exactly, will America’s illegal operations in Syria run for, and to what extent will the US seek to disrupt Iran inside Syria?

We also know that commander of the Revolutionary Guards Quds Force, Gen. Qasem Soleimani, who also retorted against Trump’s anti-Iranian rhetoric, has the US worried that Iran may deploy Shi’ite militias to Iraq to strike US troops stationed there. Just to paint a picture of the headache that Soleimani poses to the US, one should note that he has reportedly been designated as a legitimate target for assassination by the US and Israel for some time now.
Furthermore, and perhaps most importantly, we know that the recent BRICS Summit, an economic thorn penetrating the backside of Washington’s warmongering foreign policy, also has its sights set on including Iran as an essential ally somewhere down the line. As far as the BRICS nations are concerned, an attack on Iran would most likely constitute an attack on the future of everything BRICS is trying to achieve.

In this context, Iran may have some familiar allies even as it is forced to withstand an unprecedented set of aggressive measures from the US and its lackeys. Either way you analyse this warpath we are on, the resulting scenarios are potentially catastrophic and far-reaching indeed.

A war with Iran might sound far-fetched and may indeed lead to some unfathomable consequences, but the groundwork for such a confrontation is being laid right before our very eyes and the corporate media is almost all but completely silent. Whether or not a missile strike on Iran is looming on the horizon, Washington’s war with Iran has already begun in more ways than one, and appears to be set to escalate until the US can achieve the collapse of the Iranian regime through direct or indirect means.

Darius Shahtahmasebi is a New Zealand-based attorney and political analyst
Posted by seemorerocks at 18:16