After floods and heatwave, Japan braces for Typhoon Jongdari

After floods and heatwave, Japan braces for Typhoon Jongdari – Government warns of rainfall up to 500 millimeters over 24 hours 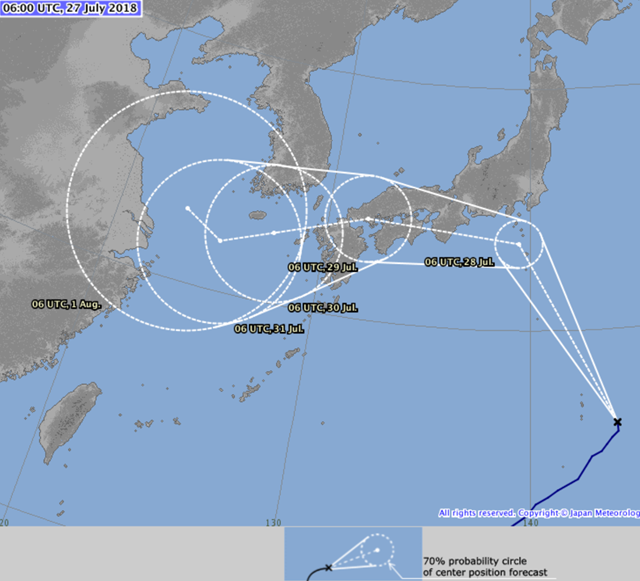 Typhoon Jongdari is set to make landfall on Japan’s mainland this weekend, bringing heavy rain and strong winds to much of a country hit in recent weeks by a deadly heatwave and historic flooding.

The typhoon was located off Chichijima, an island in the Pacific about 1,000 kilometers (621 miles) southeast of Tokyo, as of 2 p.m. Japan time Friday. Carrying sustained winds of 144 kilometers (89 miles) per hour, it’s expected to speed up and maintain its intensity as it nears the mainland on Saturday afternoon, according to the Japan Meteorological Agency.

After skirting Tokyo on Saturday, the typhoon is predicted to track towards the west of the country, near regions that were the worst hit by the historic rain and flooding. More than two hundred were killed in the floods, with some roads still impassable and train lines suspended.

“It’s possible that the typhoon could have a very large impact” on the flood-hit areas, a spokesman for the Japan Meteorological Agency said, and while the agency has yet to issue any specific warnings for these areas, it could do so over the weekend.

For now, the agency is warning many regions of strong rainfall of up to 500 millimeters over 24 hours, and urging people to be on guard for the risk of landslides and flooding. Tokyo’s Sumidagawa fireworks festival, which attracts close to a million visitors, has been postponed to Sunday as a result of the approaching storm. [more]