Fires In North America For The Last 24 Hours.

‘Get out! Get out!’ California wildfire evacuees tell of terror as blaze grew 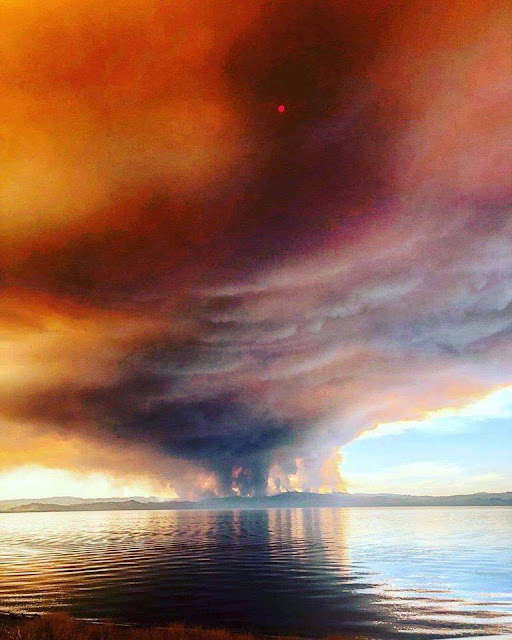 The Carr fire has devastated Redding and its surrounds. Those who fled and lived describe scenes of terrible panic and loss

Lea Flanagan did not realize the seriousness of the situation until Thursday, when she went to her local grocery story. She found utter panic.

“At that point I realized the fire had turned into our fire,” she said. “We could see the smoke just piling up behind our house. It was enormous and glowing red. We heard a big boom; it shook the house like a canon. Then the power went out.” She and her family gathered what they could and drove into the night, looking for a shelter that would accept both them and their pets.

Sunday was Flanagan’s fourth night on a cot on the grass behind the Shasta College gymnasium in Redding, California. Her cot sat under a tentlike shade structure. A few folding camping chairs and tables, an industrial garbage can; she called this collection her “house”.

“This is my uncle and son’s room,” she said, motioning to a large cot strewn with construction paper and toy trucks. The “laundry room” was a bag of dirty clothes next to those toys, the “living room” a folding table stacked with books. In an effort to maintain normalcy, she called her son to clean up the “living room”. He was flying a homemade paper airplane nearby.

Flanagan’s “house” was one of several outside the gymnasium. Inside, some 100 cots lined the polished floor under the Shasta Knights scoreboard. Nearby, volunteers gave out protective masks, granola bars, coloring books and water. The Salvation Army provided meals. Altogether, as northern California’s Carr fire raged into its seventh day, the shelter hosted an estimated 570 evacuees.

The fire was 17% contained by Sunday night. But it had grown to almost 100,000 acres, killed six people and destroyed or damaged 802 homes. Evacuation notices continued to arrive as flames advanced in mountainous areas west of Redding, even as firefighters made progress controlling flames nearer to the city and began to prepare to allow residents back into their neighborhoods.

“We’re doing two things at once: evacuating and fighting, as well as recovering and repopulating,” said Jonathan Cox, battalion chief at Cal Fire. “We’re running the full gamut, which is obviously complicated.”

Lea Flanagan in her temporary ‘house’. Photograph: Alissa Greenberg
Firefighters continued to battle fires throughout California, including in Yosemite National Park, where a firefighter died on Sunday, the second in recent days. Near Redding, panic in the early days of the Carr fire turned to grim determination as residents reckoned with the practicalities of emergency and waited for news. Firefighters settled in for a long fight against an unusually potent and unpredictable fire. Evacuees adjusted to their temporary displacement – and the possibility it might not be temporary at all.

‘Everything is gone out there’

At Haven Humane Society in Anderson, Haleigh and Ashlyn McWhirter were among many searching for pets.

All the McWhirters had left were their documents and a bag of clothes. They were staying with family. “Now, whenever we leave the house, we pack everything we have,” Haleigh said. “I’m not about to leave anything there. I want it all with me at all times.”

She and Ashlyn were searching for their Pomeranians, left by their sitter in the hurry of evacuation. “They were in a fenced-in yard,” Haleigh said tearfully. “They probably would have hid under the porch.”

Staff comforted her, promising to send someone to look for the dogs. Along with arranging searches, the organization has also taken in some 600 pet and farm animals. “We’re running on pure adrenaline,” said chief executive Mark Storrey. He had evacuated his home, with his wife and six dogs.

In the basement cafeteria of Shasta Regional Hospital, Michelle Gaffney and Stacey Kelly compared notes on what they had packed. Both have lived more than 20 years in the Redding area; both work as nurses; both were evacuated from their homes this week.

Gaffney left Thursday, grabbing documents, her three dogs, scrubs and the stethoscope she got as a graduation present. “You pare it down in your head,” she said. “What can I not live without?” After an extremely tense few days, she returned to her undamaged home on Sunday.

Kelly was not as lucky. “It’s devastating, just devastating,” she said, fighting to keep her composure. “I’ve lived in my home 20 years. My kids were raised there.”

Kelly went outside on Thursday to find her swimming pool covered in burned leaves and ash. Noticing the sky, which was a hideous “orange brown color, with dark black streaks”, she hurried to box up a few possessions: scrubs, nursing shoes, documents. A photo, taken in that moment, shows a plume of smoke shot through with unearthly glow.

When Kelly drove to the top of a nearby hill, she saw chaos: people throwing things in cars and yelling: “Get out! Get out!” After waking her son, she and her family sped away. Behind them, the fire “came like a train”. The next day, she received the news: her home had been leveled.

The hospital has rallied around Kelly and several others who lost their homes or were evacuated. “One friend,” she said, “told me, ‘I have a truck with a full tank of gas for you.’ And I thought, ‘I don’t have anything to put in a truck.’” Then there were the things she couldn’t pack – like the palm tree her elderly father helped her plant in the house when she first moved in.

A coworker gave Kelly a hug. Gaffney looked at the clock and apologized. It was time for work.

Staying busy helps keep numbness and devastation at bay. “Almost everyone who lives here knows 50 people who lost their homes,” Kelly said. “It’s so massive. You don’t want to make it sound like it’s Armageddon, but it feels like it.”

Cal Fire estimates 300 fires burning up and down California

UKIAH, Calif. (KGO) -- Cal Fire estimates there are more than 300 fires burning across California as of Sunday morning.

Crews in Northern California are focused on four of those fires, including the Carr Fire in and around Redding, the River and Ranch fires in Mendocino County, and the Steele Fire in Napa County.

Governor Brown has declared states of emergency in Mendocino, Napa, and Lake Counties where homes have been destroyed.