The West's hostility towards Imran Khan


Imran Khan election win in Pakistan receives a hostile reaction in U.S. and British media. The headlines are generally negative and the descriptions of Imran cast a damning light of him.
From the New York Times print edition front page: 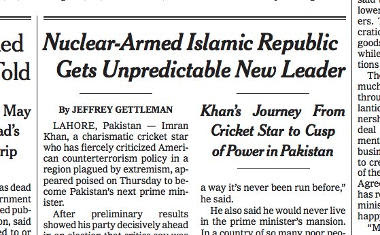 bigger
The word "Pakistan" was probably too long for the valuable front-page space. Thus the NYTshortened it to "Nuclear-Armed Islamic Republic". The attribute "unpredictable" for Imran Khan is curious. (If one cuts out the "Islamic" the headline fits to Trump's election victory. Was that the intended joke?)
The piece by Jeffrey Gettleman repeats the "unpredictable" claim:

But there is no evidence, not one example in the piece that supports that attribute. It describes how he, in the late 90s, entered politics:

Mr. Khan seized on a single issue: governance. ... He focused on corruption, repeatedly stating that a few political dynasties had shamelessly enriched themselves. ... [H]e seemed adept at not letting the gossip pages distract him, and he kept hammering on about corruption.

Corruption was also a main theme of his recent campaign. Imran's anti-corruption position has been a constant. His opposition to the U.S. war of terror also never changed. There is not one "unpredictable" bit in his political positions. Where then did that come from? Only in the very last paragraph that word returns:

Many analysts wonder how long Mr. Khan’s friendship with the military will last.

“He is known to have erratic behavior and a very unpredictable personality,” said Taha Siddiqui, a journalist and critic of the military who recently moved to France, saying he feared for his safety.

Siddiqui worked for an Indian TV channel and for France24. He has long been critical of Pakistan's military. In January he claimed that "he was attacked by up to a dozen men en route to the airport in Rawalpindi but managed to escape". He clearly dislikes that Imran Khan has good relations with Pakistan's military.  Why is that enough to make it in into a headline?
The London Times takes up the theme in this cartoon: 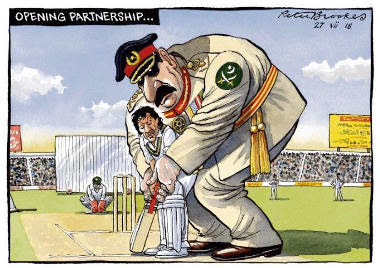 It's a cheap point. During the last 50 years there never was a prime minister of Pakistan who could act against the will of the powerful military. If the Bhutto clan and its PPP party or the Nawaz clan with PML-N had won the election their candidates would have had similar restrictions on foreign policy than Imran Khan will have.
The losing candidates will protest against the election results. They assert fraud but have yet to give examples for such.
The EU Election Observer Mission published its preliminary report. It lists some minor issues but seems satisfied. It reports no election fraud. It's most serious complain is the "uneven playing field". Via Dawn:

Addressing a press conference in Islamabad, EU Chief Observer Michael Gahler [...] said, “Despite positive changes to the legal framework with the new Elections Act, and a stronger and more transparent Election Commission, we consider that the electoral process of 2018 was negatively affected by the political environment.”

Rich candidates spend more than poor ones and have a higher chance of winning elections. That is unfair. Have we ever heard of any other 'democracy' with a similar problem?

Posted by seemorerocks at 20:27