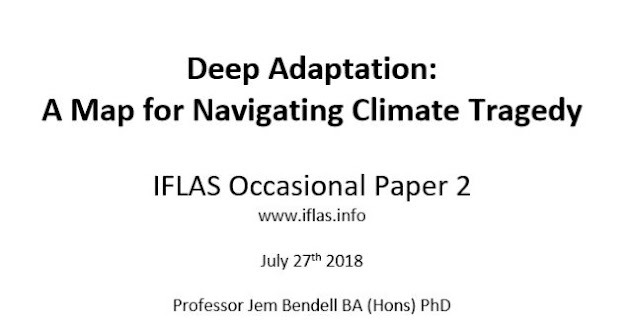 “I am releasing this paper immediately, directly, because I can’t wait any longer in exploring how to learn the implications of the social collapse we now face,” explained the author Dr Bendell, a full Professor of Sustainability Leadership. deep adaptation paper

In saying the paper was not suitable for publication, one of the comments from the reviewers questioned the emotional impact that the paper might have on readers. “I was left wondering about the social implications of presenting a scenario for the future as inevitable reality, and about the responsibility of research in communicating climate change scenarios and strategies for adaptation.” wrote one of the reviewers. “As the authors pointed out, denial is a common emotional response to situations that are perceived as threatening and inescapable, leading to a sense of helplessness, inadequacy, and hopelessness and ultimately disengagement from the issue…”

That perspective is discussed in the paper as one that enables denial. Professor Bendell explains in his response to the Editor, that the response may reflect “the self-defeating hierarchical attitude towards society that many of us have in both academia and sustainability, where we censure our own exploration of a topic due to what we consider should or should not be communicated. There is both scholarship and experience on the impact of communicating about disaster, and I discuss that in the paper.” Moreover, Bendell consulted with practicing psychotherapists on both the motivational and mental health implications of this analysis and was reassured that perceptions of a collective tragic future should not in itself be a cause for depression. Instead, it could trigger transformative reflection which could be supported – and would be inevitable one day, given the inevitability of mortality for all human life.

The paper offers a new framing for beginning to make sense of the disaster we face, called “deep adaptation.” It is one that Professor Bendell proposed in a keynote lecture two years ago and has influenced community dialogue on climate change in Britain in the past two years, including in Peterborough and Newcastle as well as being used by the Dark Mountain network.
The paper “Deep Adaptation: A Map for Navigating Climate Tragedy” is downloadable as a pdf from HERE .
The response of Professor Bendell to the Editor of the journal follows below.
A list of resources to support people as they process this information, including emotional support is here.
A LinkedIn group on Deep Adaptation exists to support professional discussion of the topic.
Letter to the Editor of SAMPJ, Professor Carol Adams, from Professor Jem Bendell, 26th July 2018.