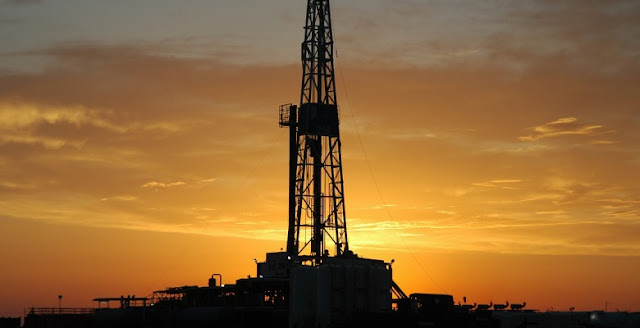 While the U.S. reached a new record of 11 million barrels of oil production per day last week, the top five shale oil fields also suffered the highest monthly decline rate ever.  This is bad news for the U.S. shale industry as it must produce more and more oil each month, to keep oil production from falling.

According to the newest EIA Drilling Productivity Report, the top five U.S. Shale Oil fields monthly oil decline rate is set to surpass a half million barrels per day in August.  Thus, the companies will have to produce at last 500,000 barrels of new oil next month just to keep production flat.
Here are the individual shale oil field charts from the EIA’s July Drilling Productivity Report:

The figures that are shown above the UP arrow denote the forecasted new production added next month while the figures above the DOWN arrow provide the monthly legacy decline rate.  For example, the chart on the bottom right-hand side is for the Permian Region.  The EIA forecasts that the Permian will add 296,000 barrels per day (bpd) of new shale oil production in August, while the existing wells in the field will decline by 223,000 bpd.

In just the first seven months of 2018, the total monthly decline rate from these top shale fields increased by 26%.  These massive decline rates are the very reason the shale oil and gas companies are struggling to make money.  A perfect example of this is PXD, Pioneer Resources.  Pioneer is the largest shale oil producer in the Permian.  According to Pioneer’s Q1 2018 Report:

Pioneer spent $818 million on capital expenditures (CapEx) for additions to oil and gas properties (drilling and completion costs) during Q1 2018, brought on 63 horizontal wells in the Permian, and only added 9,000 barrels per day of oil equivalent over the previous quarter.  So, how much Free Cash Flow did Pioneer make with oil prices at the highest level in almost four years??  Well, you’re not going to believe me… so here is Pioneer’s Cash Flow Statement below:

Pioneer reported $554 million in cash from operations and spent $818 million drilling and completing oil wells in the Permian and a few other locations.  Thus, Pioneer’s Free Cash Flow was a negative $264 million.  However, Pioneer spent an additional $51 million for additions to other assets and other property and equipment shown right below the RED highlighted line for a total of $869 million in total CapEx spending.  Total net free cash flow for Pioneer is -$315 million if we include the additional $51 million.

Therefore, the largest shale oil producer in the Permian spent $264 million more than they made from operations drilling 63 new wells in the Permian and only added a net 9,000 barrels per day of oil equivalent.  Now, how economical is that???

How long can this insanity go on??

If we look at the Free Cash Flow for some of the top shale energy companies in Q1 2018, here is the result:

Even with higher oil prices, the U.S. shale energy companies are still struggling to make money.

So, the question remains.  What happens to these shale oil companies when the oil price falls back towards $30 when the stock market drops by 50+% over the next few years??  And how is the U.S. Shale Energy Industry going to pay back the $250+ billion in debt??