Drone footage from the Greek fires 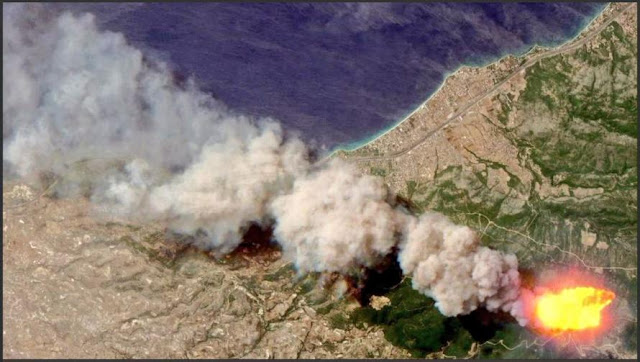 The fire broke out Monday northeast of Athens in the seaside Rafina region, racing through the area fueled by gale-force winds and leaving 82 dead with most burned beyond recognition, as crews searched for more victims.

Spokeswoman Stavroula Malliri said the search for further potential victims continued, So far, she said homes in the area that had not been destroyed and were shut had not been entered by rescue crews, but that the search would not end until every building in the area had been thoroughly investigated.

Apart from the house-to-house searches in the burnt areas, coast guard and volunteer divers were also searching the waters off the coast of the worst affected areas and a nearby deserted island. -CBS

Hundreds of people fled to nearby beaches after the fires broke out Monday, with many swimming out to sea to avoid the smoke and flames.

Dozens spent hours at sea before being picked up by coast guard vessels, fishing boats and a passing ferry. Several of the dead were people who drowned.

The worse affected area was the seaside community of Mati, where the majority of victims were found, including 26 people found huddled together, many embracing.

Most of the bodies have been burnt beyond recognition, meaning identification was possible only through DNA and dental records. -CBS

Maria Saridou and her son went to a morgue in the Greek capital to provide DNA samples as they searched for Saridou's 55-year-old missing sister, Eleni, who had gone swimming with a friend in Mati.