What flavour of canned air do you want? 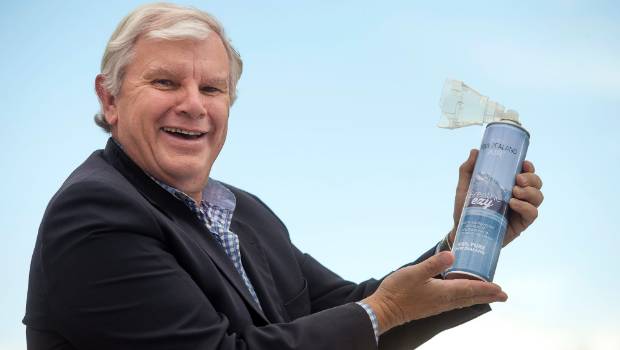 
A Christchurch company that helped pioneer sales of canned fresh South Island air to China is introducing new "flavours" as it makes a push into the Indian market, and goes after sales closer to home.

Breathe Ezy is close to releasing canned air infused with calming herbs, such as lavender, to help users relax and sleep, and another "flavoured" air to clear the throat and lungs.

Company director Phillip Duval said the new mixes could sell locally as well, unlike the straight fresh air which they mostly marketed in China.

The cans will cost slightly more than the recommended retail price of NZ$20 for 7.2 litres or air, or 130 deep breaths, although Asian retailers often add a significant mark up.

India's air pollution problems and its rapidly growing middle class made it an attractive market and Breathe Ezy was planning a new air with a slightly increased oxygen level to cater for demand from "oxygen bars" in cities like Delhi, Duval said.

Canada was their main competition for air sales in China, but they also made limited exports to South Korea and Japan.

Breathe Ezy has a number of air collection points because Duval said some Chinese clients specified which part of the country they wanted their air from so GPS coordinates of the collection site were printed on the label.

"Rather than being in one place and saying 'take it or leave it,' we have accommodated their request."

Since hitting the shelves just over two years ago Breathe Ezy has expanded into supplying other New Zealand companies wanting to export air, and about a third of its canning was now done on contract for other brands.

"You have to grab opportunities as you see them and you don't turn your back on business in a small country like New Zealand, so we prefer to roll out the welcome mat," said Duval.