A belated recognition of climate change

Is something starting to sink in – belatedly?

Is this what it took?!

The Carr Fire is a terrifying glimpse into California’s future 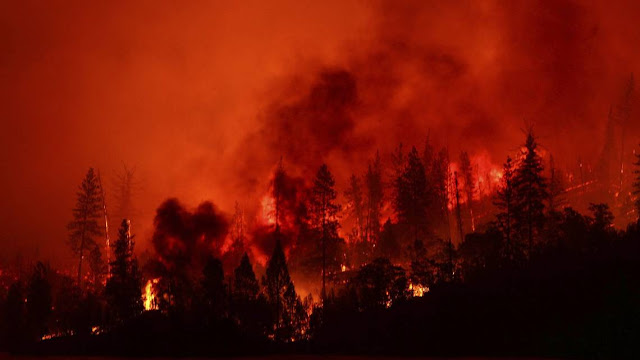 
As we face yet another summer of towering firestorms and overmatched first responders, it is becoming clear that we must radically improve emergency preparation in California. Summer has been a death march and July isn’t even done.

On Thursday evening, the wind-driven Carr Fire rushed into residential neighborhoods in Redding, bringing a one-two punch of thick smoke and unpredictable “firenados” that overwhelmed firefighters. At least two people were killed trying to beat back the blaze and, within hours, dozens of homes had burned to the ground.

“There was literally a wall of flames coming into the city,” California Department of Forestry and Fire Protection Battalion Chief Jonathan Cox said Friday as firefighters tried to make a stand in triple-digit heat and gusting wind.
This is climate change, for real and in real time. We were warned that the atmospheric buildup of man-made greenhouse gas would eventually be an existential threat.

till, it is sobering to witness how swiftly scientists’ worst predictions have come true, from the lethal heat wave gripping Japan to the record temperatures in Europe to the flames exploding near the Arctic Circle. And it is terrifying to watch as ideologues in the Trump administration block action on this gathering crisis.

With fires at opposite ends of California, shutting down Yosemite National Park and emptying the mountain town of Idyllwild, the White House is reportedly trying to revoke a decades-old waiver that has allowed the state to impose strict rules on auto emissions, a leading cause of greenhouse gas pollution.

President Donald Trump couldn’t be more wrong, and this irresponsible push just underscores the need for Californians to double down on our convictions. But it also means that the need to plan is even more urgent than we imagined.

That means not only figuring out whether PG&E will be liable for the billions of dollars in property damage from wildfires along the path of its utility equipment, but also fundamentally changing the way we live, and the way we prepare for and recover from natural disasters.

Many in Redding, for example, weren’t ready for a wildfire capable of creating its own weather system in their neighborhoods. They thought flames could never jump the Sacramento River and get into the city, in large part, because it’s never happened.

But old rules no longer apply. Now everyone in California needs a plan to escape a natural disaster, and cities in fire zones especially need better emergency notification systems, better public education and better evacuation routes.
Thankfully, some of this is already happening. Last October, when the wine country fires swept through Santa Rosa in the middle of the night, residents said they had no warning. Many barely had enough time to pack a few things and jump in the car.

The old methods of distributing emergency information didn’t work because of damaged cell towers and a system tied to landline phones, which many residents no longer have. The result was chaos: bumper-to-bumper traffic, unwieldy lines at gas stations and, tragically, people who never made it out alive.

In Redding, many residents reported getting robocalls and text messages on their cellphones, telling them to evacuate. The result was better, but still chaotic. Police swarmed neighborhoods, running door to door. Again, there was bumper-to-bumper traffic, as residents who underestimated the wildfire’s reach waited to leave.

Don Anderson, who escaped his Redding home, told The Bee: “People at the end of that line, that fire was on their tail.”

If this is the new normal for wildfires, then California must do better. But prevention is only part of the equation. There’s also what happens next.
As in the wine country, the Carr Fire is sure to exacerbate housing demand in Redding, adding yet more pressure to the statewide housing crisis. The amount of land in this great state that’s livable and insurable is already shrinking.

California must plan now for these and other aspects of global warming, as more of the state becomes too hot, too dry, or too fire- or flood-prone to safely live in, and as more of the world braces for the era of climate refugees.