This episode features a conversation with Guy McPherson, conservation biologist, social critic, and professor emeritus at the University of Arizona. Guy has become known, in recent years, for his lectures and writings on abrupt climate change and the loss of habitat for the human species. Guy has, and continues to, "connect the dots" regarding the scientific evidence surrounding runaway climate change and the various tipping points and positive feedback loops leading to an uninhabitable landscape for much of the life on this planet.

Guy is currently on a speaking tour though the Midwestern United States, and was kind enough to let me pick his mind on his work, as well as his thoughts on the controversial article put out in the most recent issue of New York Magazine titled "The Uninhabitable Earth" by David Wallace-Wells. We discuss the response to this piece, as well as Guy's direct influence on the final product.
We also get into what it means to carry this knowledge, and he and I converse on the difficulty of integrating this frame of thinking into everyday life. Once you know, you can't un-know.

Guy's message at the end of all this is to recognize that we don't know how much time we have to live the lives we have been given. What is happening with our climate and our planet is well beyond anyone's control at this point. So, live fully. Attend to those those around you. Make plans, but don't attach yourself to the outcome. Practice compassion and love as fully as possible, which is easier said than done, of course. But as in all things, we must "Let go, or be dragged."

- Thank you to  Jordan Thornquest of Thornquest Studios for letting me use his space and for his assistance with the recording and production of this episode. Check out Jordan's work and upcoming events at jordanthornquest.com

- Check out Guy McPherson's work on guymchperson.com, where you can find updates on upcoming speaking events, his writings and essays, as well as an archive of his interviews and lectures.

Here is a link to information on his Midwest speaking tour: guymcpherson.com/coming-events/

- The article discussed in this episode "The Uninhabitable Earth" by David Wallace-Wells can be read here: nymag.com/daily/intelligencer/2017/07/climate-change-earth-too-hot-for-humans.html

- This episode features "Tiptoes" by Daedelus and "Helplessness Blues" by Fleet Foxes. 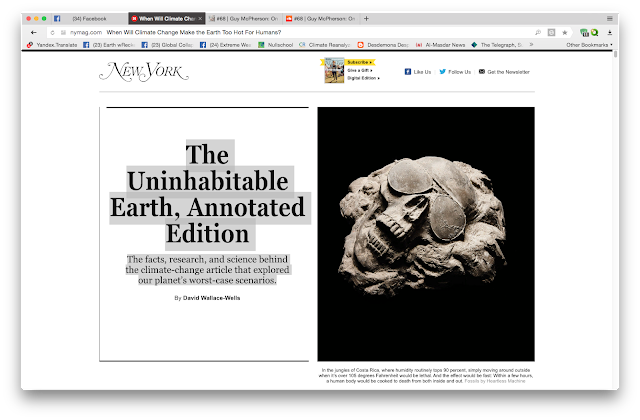 The facts, research, and science behind the climate-change article that explored our planet’s worst-case scenarios.
Posted by seemorerocks at 18:42