What has happened to Lower Hutt water?

The death of pure water in Lower Hutt
Seemorerocks 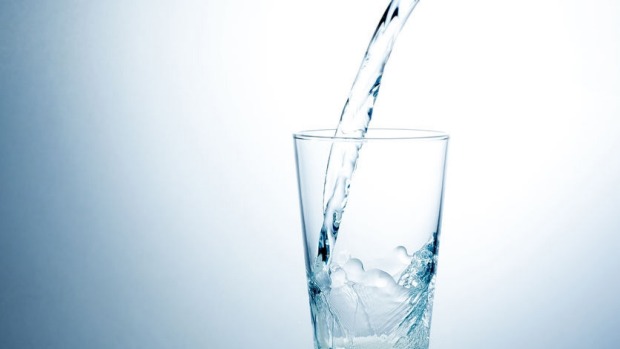 It is amazing how quickly things can fall apart.

Things can seem to be normal until they are not. This is the nature of trigger points. Things change seemingly under the surface until something happens and ‘suddenly’ you have a full-blown crisis on your hands.

One example is the nation’s waterways. Those of us of a certain age can remember clean rivers where we could swim and didn’t have to worry about putting our heads under water. We knew, in recent years, that we had a problem but this has in the last year of an extreme neo-liberal government and the takeover of the country by dairy become a serious crisis that is now being written about every day.

So it is with our local community.

Lower Hutt, and especially Petone, has had some of the purest aquifer water anywhere in the world and people came from many miles around to fill their bottles at a communal tap. 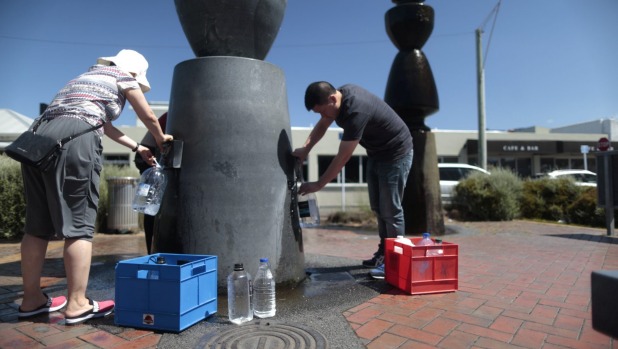 All that has disappeared, in an instant, as it were, and it doesn’t look as if we are ever going to get our pure water supply back.

Clearly there are a lot of angry and upset people who are no longer able to access pure water, free of chemicals, for their families.

LOWER HUTT NO LONGER HAS A SOURCE OF UNTREATED WATER

Some weeks ago we noticed that the tap water had a very distinct smell of chlorine. Then, about ten days ago we were approached by someone we know who, without revealing anything at all, expressed their anger at what was apparently a cover-up by the local council and encouraged us to ask our own questions on behalf of the concerned public.

Next came a newspaper article from the Dominion Post as well as the Hutt News (owned by the same media company,Fairfax).

Lower Hutt residents no longer have access to untreated water

When this was posted on social media this comment was made by a friend:

"Hutt water is on my mind.

"The aquifer runs underneath Lower Hutt and whenever there is major work, such as a new building or a new bridge, there is always a concern about its impact on the aquifer"

"What are the chances of our aquifer being breached by the recent work at Hutt City Council buildings/new Event Centre? I understand the aquifer is very shallow there Ray Wallace - could it have been drilled through for foundation work? Maybe there was a notifiable consent that I missed? How do I find out?

It`s a very sad moment to loose our pristine water that rates as some of the purest in the world - and surely one of our greatest assets of the Hutt Valley."

In answer to the very obvious question “When will we get it back? That's the only water my family drinks” the response came back:

“We probably won`t. Apparently pretty impossible if it has been breached. Its totally sterile under the ground...only ruined if it has holes put through it or if too much is sucked out and ground water is then sucked into aquifer.” 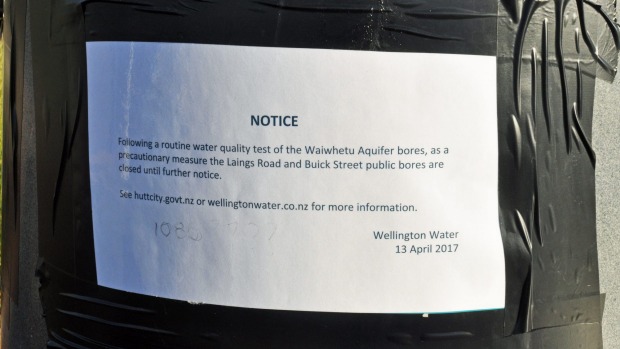 This was not the only voice of concern. My partner received a phone call while she was away in the South Island, also encouraging us to look into this and to ask questions.

Not knowing how to get an honest response from officialdom she wrote this letter to the mayor of Lower Hutt, Ray Wallace:

"As concerned residents and observers of the contamination of our city's water supply and precious aquifer we're angry & upset at the lack of transparency from Council in its communication of this huge issue. Please come clean and tell us what is really going on - or what you THINK is going on. Even if just to say, initially "We don't know. We are working hard to find out. We have the best minds on the job"

"It's a crisis. Please treat it as such and keep us updated."

"Sorry Robin I can't see how you can possibly say the Council's hasn't been transparent. We have had updates on our website daily, we have put out press releases with updates which both print media and radio have picked up on. Our communication has been consistent. This is serious, Public safety is paramount. This is the first time there has ever been a contamination at source (the aquifer) bacteria levels are trending up. We have Wellington Water engineers doing an investigation and until we know more for safety of the drinking water it will be chlorinated. That has been the consistent message and that remains the position."

As one person pointed out in response what we need is not “transparency” but the truth. Just think of the expression “transparent lies” and you’ll know what I’m talking about.

We took our suspicions to Mike Joy of Massey University, champion of New Zealand waterways and scourge of the polluters.

His response was brief and unequivical:

"Yeah it will be human sewage I bet. Broken leaking sewer pipes.... Broken pipes near where aquifer busted”

The media coverage has largely been abysmal and designed, on the surface, to support the council’s obfusication (unless the author has used aesopian language to encourage the reader to look between the lines for a possible explanation)

Looking at the article from the Dominion Post it is really a dog’s breakfast without a logical development.

The official position is that the water is safe, they don’t know what the cause is although it “may” be due to earthquake damage.

The author of the article, Nicolas Boyack starts off by saying:

“Aquifers are under pressure from development and contamination all over the world, but Lower Hutt's water supply has always been regarded as pristine.”, adding that “water from the Waiwhetu Aquifer, which begins underneath the Hutt River, has long been a source of pride for Lower Hutt residents”

Having pointed out that the cause is unknown he points out in the next paragraph:

"The aquifer runs underneath Lower Hutt and whenever there is major work, such as a new building or a new bridge, there is always a concern about its impact on the aquifer.

"Once an aquifer is compromised by seawater or contamination, the quality of the water quickly deteriorates and it is almost impossible to reverse. That is why there is so much concern about the Waiwhetu Aquifer."

In pointing out the “intriguing theory” Mr Boyack (or the officials in the Council) do not know the difference between  theory and  hypothesis. Wheras a hypothesis is an plausible explanation for a phenomenon, a theory has already undergone extensive testing by various scientists and is generally accepted as being an accurate explanation of an observation.

I would say,certainly not a theory – and perhaps not even a hypothesis, as there is not a shred of evidence brought to the table to support the “intriguing theory”.

Even the public is entitled to supporting facts.

WHAT DO WE KNOW​? 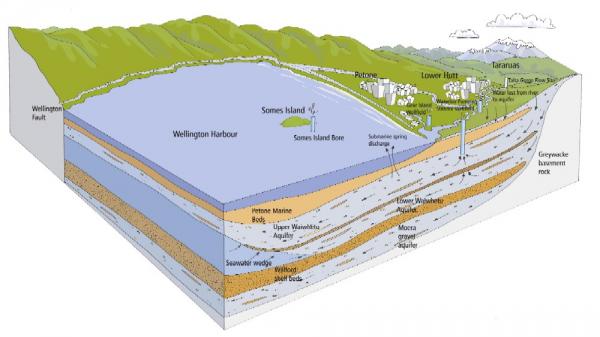 Our water – where does it come from?

As for the first two, I have written previously about the danger to our water supply from river sources from development, mismanagement and, most especially drought – a natural consequence of abrupt climate change. 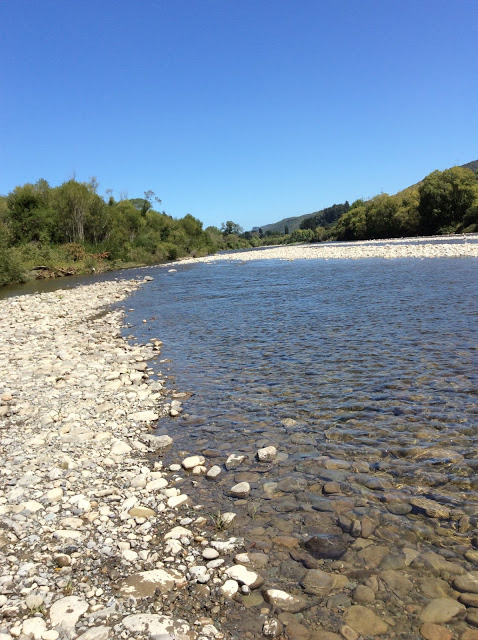 Something is with the Hutt River

The response of the council has been to dream up a mega development project designed to protect against a hundred ( or thousand-year?) flood by taking out trees and other vegetation, houses that are nearby and straightening the river (which any fool know will make things worse) – an engineer’s and developer’s dream.

It is the third source – the aquifer, providing about 40 % of the district’s annual water supply that has been damaged – permanently, if you know much about aquifers.

As the Council’s own material explains, “the Waiwhetu artesian aquifer is a zone of water-holding sand, gravel and boulders beneath the Hutt Valley “

The water becomes naturally pressurised beneath a layer of hard clay. The aquifer, which is estimated to be 70 meteres thick and 20 m thick at the edge of the harbour, takes more than 12 months to passs through the aquifer to the council wells which makes it pure and free from disease-causing microorganisms.

The aquifer has somehow become infected with e-coli organisms.

E-coli,which forms one of the foremost reasons of water contamination in the country and the world as a whole does not exist freely in the environment but comes primarily from the intestines of animals and also humans.

Even if we accept that the aquifer has become damaged from last November’s earthquake it does not explain how the organism got to be in the artesian water below ground.

What does make sense is that piles that were sunk for one or other of the new building projects in this Council's development mania may have pierced the aquifer seal and somehow, that combined with broken pipes, has contaminated the pure artesian water.

The latest word is that the chlorination of the water might become a permanent feature, which makes perfect sense.

WHAT SHOULD WE DO?

This is conjecture on my part based on what I know. Call it a hypothesis.

Unless some brave soul with a conscience finds a way to access the information needed and share it with the public we might not be any the wiser.

We live in an era where divulging (or leaking) information essential to the public interest is regarded as a crime worse than the most egregious acts and cover-up by the authorities.

The council is not being 'transparent' in its communication. It is closer, in my opinion, to 'transparent lies'. 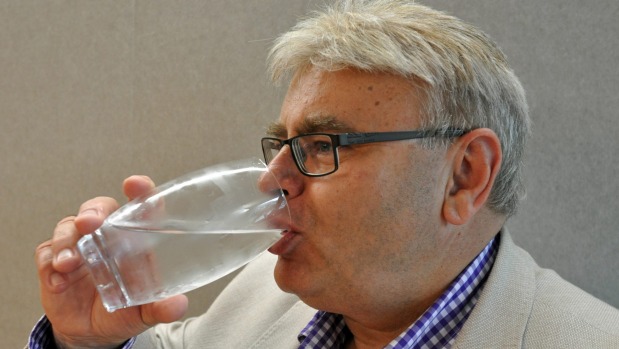 Tragically it is not a case of 'putting things right'.  The precious purity of our  water has gone so it is pointless to cry over spilt milk but to recognise the situation as it is and make efforts to ensure that the development-obsessed council do not repeat the exercise again in the future.

I enourage everyone who can to write letters and ask questions and generally not give this council a moment of peace until they come clean.

Someone also needs to do some work to make the certain connections with abrupt climate change (not the nonsense from the IPCC that we have until 2100).