Another month has passed and so here is the updated Arctic sea ice volume graph as calculated by the Pan-Arctic Ice Ocean Modeling and Assimilation System (PIOMAS) at the Polar Science Center: 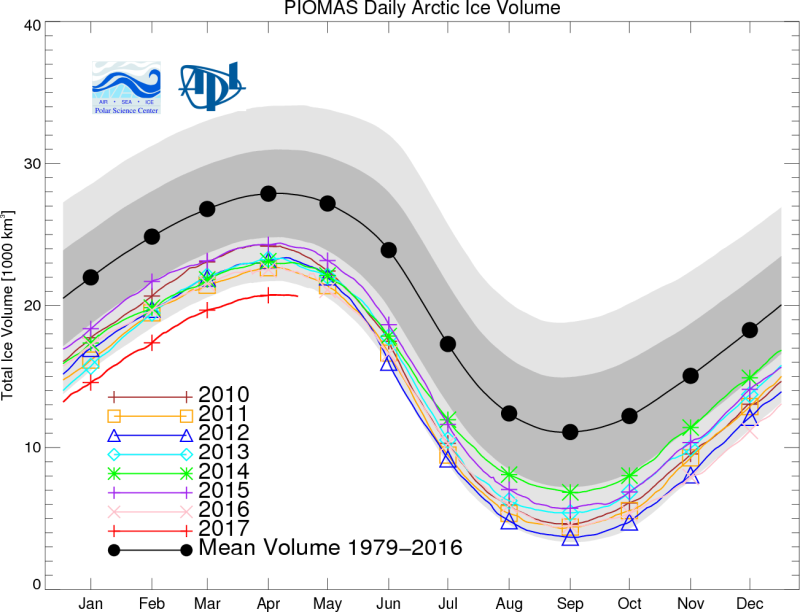 It's no surprise 2017 is still lowest on record, according to the PIOMAS model. If during the last week of April the Arctic wouldn't have cooled down (somewhat) like it did, the gap with previous years would've grown even bigger. But as it is, things haven't changed all that much since the end of March. The lead over number 2, 2011, has decreased from 1731 to 1642 km3. The difference with record low year 2012 (at the minimum) is practically unchanged.

Here's how the differences with previous years have evolved from last month:

The annual maximum was also reached in April and I will discuss it below, but first want to go through the usual graphs shown in this update. Starting with Wipneus' version of the PIOMAS sea ice volume graph showing more details: 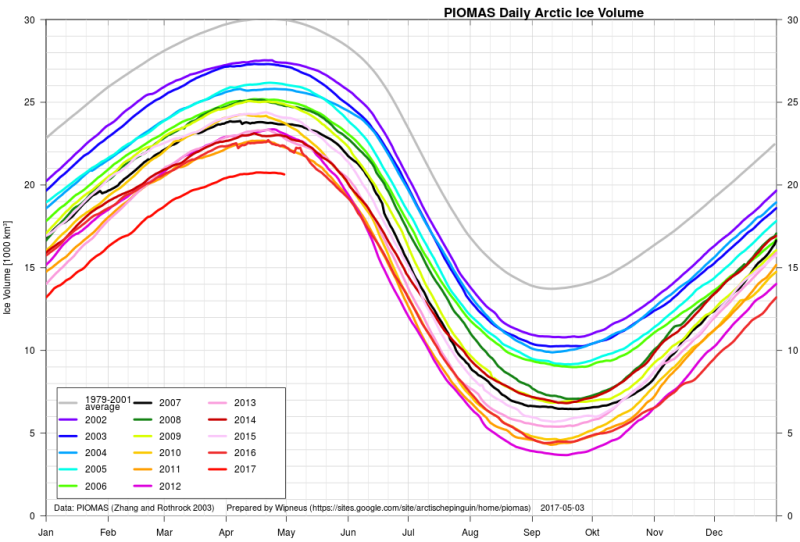 The trend line on the PIOMAS sea ice volume anomaly graph has barely left two standard deviation territory, but as I wrote last month, it is exceptional that it's so close to it at this time of the year: 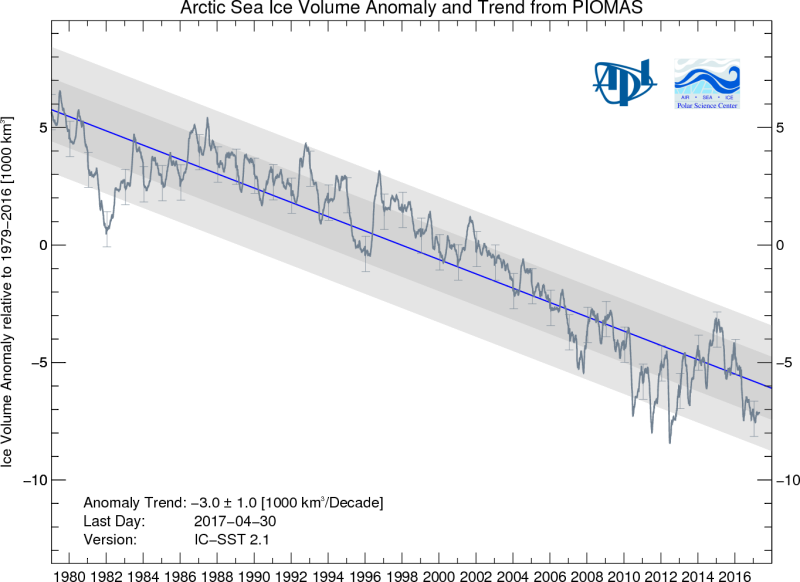 And the same goes for the Polar Science Center thickness plot: 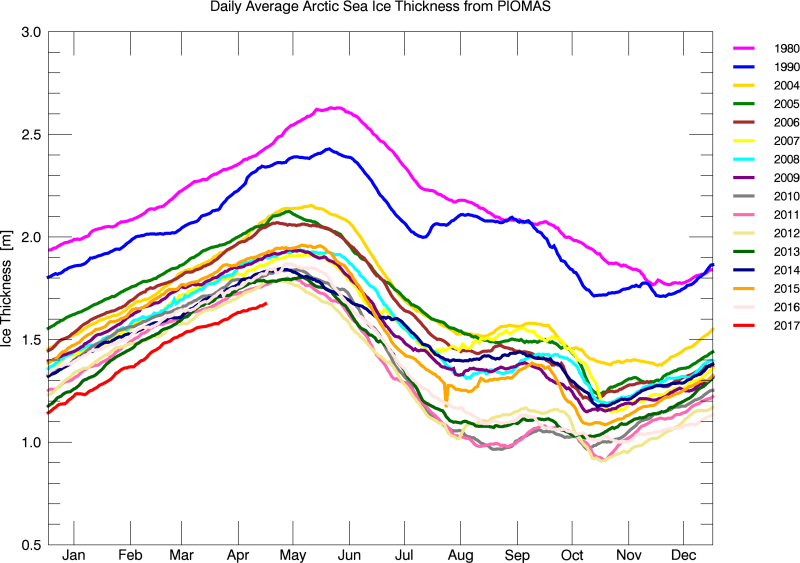 And now for that maximum.
Based on the average of the last 10 years I calculated that this year would probably end up somewhere around 20795 km3, and it turned out to be a tad lower: 20756 km3. That means that this past winter saw the lowest amount of sea ice volume growth after the minimum since 2006 and 2007: This makes sense if we look at the sea ice age distribution map that was posted in yesterday's monthly update on the NSIDC website, as sea ice age is an indicator of volume/thickness: 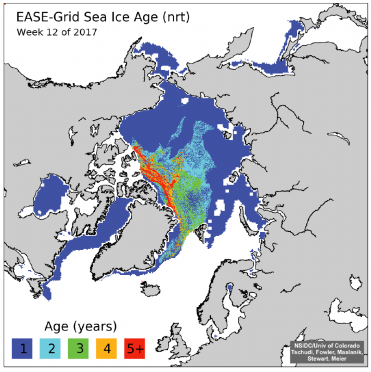 There is no barrier of multi-year sea ice in the Beaufort Sea whatsoever, and a lot of three-year ice is poised to be pushed out of Fram Strait, while the thickest ice could be squeezed through the garlic press of the Canadian Archipelago again, as well as Nares Strait (where no arches have formed this winter). Not looking good. Not looking good at all.
So, with a maximum that was almost 2000 km3 lower than the previous record reached in 2011, it's obvious that anything is possible this coming melting season. Last month, I put up some calculations to show where this could go, but the graph below - created by Jim Pettit - is an excellent visual representation: 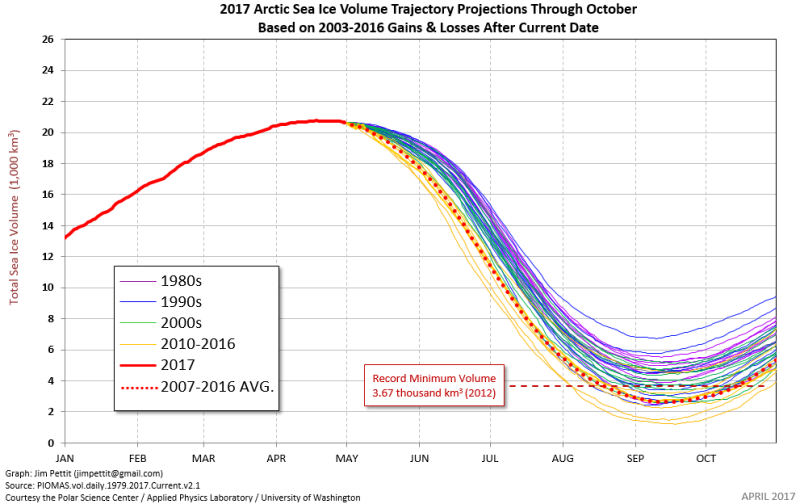 There are clearly myriad of ways by which the 2017 melting season could break 2012's record low minimum.
If this year's melt is equal to the average of the last 10 years, there will be around 2500 km3 left in September (mind you, the 2012 record low minimum is 3673 km3). If there's as much melt as in 2010 or 2012, this year's minimum will barely go above 1000 km3. I don't want to know what the Arctic looks like if that should happen.
There's nothing else to do but hope that PIOMAS has it completely wrong, or else pray for lots of cold and cloudy weather in the Arctic this summer.

Posted by seemorerocks at 15:27