Angela Merkel: "Europe must take its fate into its own hands"; "US, Britain no longer reliable partners.”

The Duran,
28 May, 2017
Angela Merkel knows that Germany cannot survive without US support.
Speaking at a CDU election rally in Munich, German Chancellor Angela Merkel said that Europe “must take its fate into its own hands.”

Merkel, who has single-handedly destroyed most of the European Union in favor of globalist, neo-liberal values, knows full well that without US support Germany will never be able to assert its power over the rest of the EU.

Consider Merkel’s speech more of a globalist plea for help and support from elitist friends, instead of a statement of strength.

Faced with a western alliance divided by Brexit and Donald Trump’s presidency, Merkel said “die zeiten, in denen wir uns auf andere völlig verlassen konnten, sind ein Stück vorbei”, or loosely translated “the times in which we could completely depend on others are on the way out” and added that “I’ve experienced that in the last few days.”

Merkel then said that while Germany and Europe would strive to remain on good terms with America and Britain, “we have to fight for our own destiny” and she also said that special emphasis was needed on warm relations between Berlin and newly-elected French President Emmanuel Macron.

Her comments came after Trump said during the G-7 meeting he needed more time to decide if the US would continue backing the Paris climate deal, which has frustrated European diplomats.

Edward Snowden, and many other pundits, took to twitter to reflect on the gravity of Merkel’s statement…

The IndependentVerified account @Independent
Angela Merkel says Germany can no longer rely on America under Donald Trump http://ind.pn/2r9Sy8H
3:08 AM - 29 May 2017

Merkel today: "The times in which [Germany] could fully rely on others are partly over. I have experienced this in the last few days."
2:06 AM - 29 May 2017 from Washington, DC

Merkel saying Europe cannot rely on others & needs to take matters into its own hands is a watershed-& what US has sought to avoid since WW2
3:08 AM - 29 May 201

Big moment in transatlantic relations: Merkel says Trump's America no longer a reliable partner https://www.welt.de/politik/deutschland/article165008816/Merkel-sieht-in-den-USA-keinen-verlaesslichen-Partner-mehr.html&wtmc=socialmedia.twitter.shared.web …
via @welt
3:08 AM - 29 May 2017

Angela Merkel: EU cannot completely rely on US and Britain any more 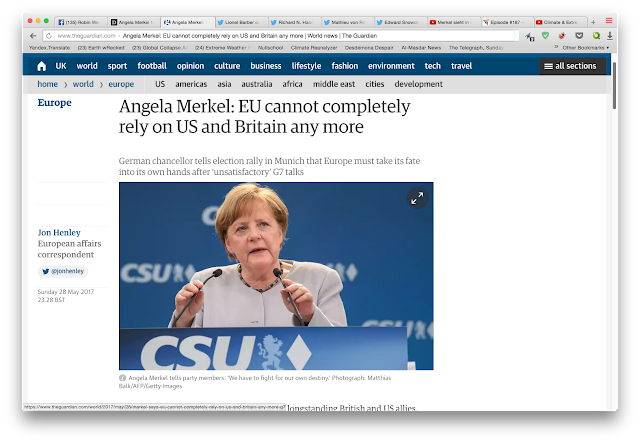 Der Spiegel used to be a publication I once admired. Now it is one of the most outspoken russophobic, neo-con voices out there – more based, even, than the US media r the BBC (if that is possible!)

A Danger to the World

It's Time to Get Rid of Donald Trump
Donald Trump has transformed the United States into a laughing stock and he is a danger to the world. He must be removed from the White House before things get even worse. 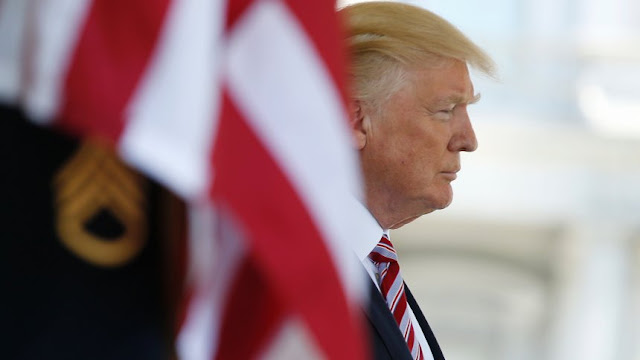 Donald Trump is not fit to be president of the United States. He does not possess the requisite intellect and does not understand the significance of the office he holds nor the tasks associated with it. He doesn't read. He doesn't bother to peruse important files and intelligence reports and knows little about the issues that he has identified as his priorities. His decisions are capricious and they are delivered in the form of tyrannical decrees.

He is a man free of morals. As has been demonstrated hundreds of times, he is a liar, a racist and a cheat. I feel ashamed to use these words, as sharp and loud as they are. But if they apply to anyone, they apply to Trump. And one of the media's tasks is to continue telling things as they are: Trump has to be removed from the White House. Quickly. He is a danger to the world.

Trump is a miserable politician. He fired the FBI director simply because he could. James Comey had gotten under his skin with his investigation into Trump's confidants. Comey had also refused to swear loyalty and fealty to Trump and to abandon the investigation. He had to go.

Trump is also a miserable boss. His people invent excuses for him and lie on his behalf because they have to, but then Trump wakes up and posts tweets that contradict what they have said. He doesn't care that his spokesman, his secretary of state and his national security adviser had just denied that the president had handed Russia (of all countries) sensitive intelligence gleaned from Israel (of all countries). Trump tweeted: Yes, yes, I did, because I can. I'm president after all.

Nothing is as it should be in this White House. Everyone working there has been compromised multiple times and now they all despise each other - and everyone except for Trump despises Trump. Because of all that, after just 120 days of the Trump administration, we are witness to an American tragedy for which there are five theoretical solutions.

The first is Trump's resignation, which won't happen. The second is that Republicans in the House and Senate support impeachment, which would be justified by the president's proven obstruction of justice, but won't happen because of the Republicans' thirst for power, which they won't willingly give up. The third possible solution is the invocation of the 25th Amendment, which would require the cabinet to declare Trump unfit to discharge the powers of the presidency. That isn't particularly likely either. Fourth: The Democrats get ready to fight and win back majorities in the House and Senate in midterm elections, which are 18 months away, before they then pursue option two, impeachment. Fifth: the international community wakes up and finds a way to circumvent the White House and free itself of its dependence on the U.S. Unlike the preceding four options, the fifth doesn't directly solve the Trump problem, but it is nevertheless necessary - and possible.

No Goals and No Strategy

Not quite two weeks ago, a number of experts and politicians focused on foreign policy met in Washington at the invitation of the Munich Security Conference. It wasn't difficult to sense the atmosphere of chaos and agony that has descended upon the city.

The U.S. elected a laughing stock to the presidency and has now made itself dependent on a joke of a man. The country is, as David Brooks wrote recently in the New York Times, dependent on a child. The Trump administration has no foreign policy because Trump has consistently promised American withdrawal while invoking America's strength. He has promised both no wars and more wars. He makes decisions according to his mood, with no strategic coherence or tactical logic. Moscow and Beijing are laughing at America. Elsewhere, people are worried.

In the Pacific, warships - American and Chinese - circle each other in close proximity. The conflict with North Korea is escalating. Who can be certain that Donald Trump won't risk nuclear war simply to save his own skin? Efforts to stop climate change are in trouble and many expect the U.S. to withdraw from the Paris Agreement because Trump is wary of legally binding measures. Crises, including those in Syria and Libya, are escalating, but no longer being discussed. And who should they be discussed with? Phone calls and emails to the U.S. State Department go unanswered. Nothing is regulated, nothing is stable and the trans-Atlantic relationship hardly exists anymore. German Foreign Minister Sigmar Gabriel and Bundestag Foreign Affairs Committee Chair Norbert Röttgen fly back and forth, but Germany and the U.S. no longer understand each other. Hardly any real communication takes place, there are no joint foreign policy goals and there is no strategy.

In "Game of Thrones," the Mad King was murdered (and the child that later took his place was no better). In real life, an immature boy sits on the throne of the most important country in the world. He could, at any time, issue a catastrophic order that would immediately be carried out. That is why the parents cannot afford to take their eyes off him even for a second. They cannot succumb to exhaustion because he is so taxing. They ultimately have to send him to his room - and return power to the grownups.