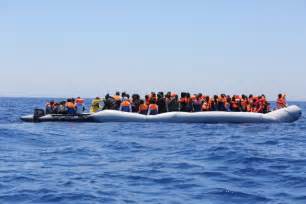 As many as one million migrants are already on the way to Libya and Europe from countries across Africa, the former head of the British embassy in Benghazi has warned.

The warning by Joe Walker-Cousins, head of the UK’s Libya mission between 2012 and 2014 comes as European governments struggle to find a response to the flow of migrants from the Mediterranean, and the appalling conditions in detention camps run by traffickers or the Libyan government.

A total of 181,000 refugees reached Italy from Libya last year, and with little sign of an effective unity government being formed in Libya to combat the militia-organised trafficking, mainstream European politicians are facing a massive challenge.

Walker-Cousins said the EU’s efforts to train a Libyan coast guard operating in inland waters was “too little and too late along the pipeline”. He said: “My informants in the area tell me there are potentially one million migrants, if not more, already coming up through the pipeline from central Africa and the Horn of Africa.”

Last year 179,000 of the 181,000 African refugees in Italy were picked up outside Libyan coastal waters either by the Italian navy, the EU border agency Frontex or by NGOs.

He said it was better to take “capillary action” 1,400 km to the south on Libya’s porous land borders rather than on the coast – which he described as “a stone’s throw from their final destination of Europe.”

In a severe blow to Rome, the Libyan supreme court last week rejected an Italian-Libyan memorandum of understanding signed in February that was intended to empower Italy to train the Libyan coast guard to take a more active role by boarding ships and sending back refugees spotted in Libyan coastal waters.

The Libyan court ruling said the UN-backed Libyan Government of National Accord (GNA) did not have the legal authority to sign the memorandum with Italy since it has not been recognised in Libya as a legitimate government. The GNA, theoretically in power in the west of Libya for a year, has not been able to win the support of the Libyan parliament the House of Representatives, a precondition for its legitimacy in the eyes of the court.

Although the court ruling is being appealed, the judgment has left a main plank of the EU’s Libyan refugee policy in limbo.

The crisis has also prompted EU leaders to study new plans first to speed up asylum processing in Italy, and then to offer new financial incentives to countries such as Nigeria to take back rejected asylum claimants. Nigeria would also be a given a quota of visas for its workers to come to Europe.

The new refugee package has been developed by the influential European Stability Initiative (ESI), and is being examined by governments across the Mediterranean.

It is in part-based on the EU-Turkey refugee agreement signed in March 2016 which has in the space of a year seen a dramatic fall in the number of migrants trying to reach Europe from Turkey through Greece.

Under the plans being submitted to governments in Greece, Malta, Sweden, Germany, France and Italy, new EU-funded reception centres in Italy would process all asylum applications within a minimum of four weeks, as opposed to the current three months or more.

Any rejected asylum applicant would then be sent back to their country of origin if that country was deemed safe. Libya would be excluded since it could not be classified as safe.

The migrant slave trade is booming in Libya. Why is the world ignoring it? | Ross Kemp
Read more
ESI chairman Gerald Knaus said: “Unless we do something there will be a record number of people drowning and suffering. There is little that we can do about the root causes of migration from Africa in the foreseeable future.

“We have to ... find a concrete alternative, and the best is based on the EU taking on a responsibility for speeding up the processing of claims in Italy.

Knaus said it was also critical to ensure that Nigeria, Senegal and other countries, after a specific date, agreed to take back their nationals who do not qualify for protection, saying this should be the chief priority in talks between the EU and African countries of origin – similar to the commitment Turkey made to take back without delay people who arrived in Greece after 20 March 2016.

Many African countries have been reluctant to prevent the flow of migrants to Europe partly due to the vast remittances migrants send back to their countries.

Specific “take back” agreements between the EU and African countries of origin would focus only on those who arrived in Italy after these agreements entered into force, reducing the impact on current remittance flows.

In return the EU would offer these countries concrete benefits, including scholarships and annual visas. The EU has already provided Turkey with more cash than the entire US government refugee program budget, yet the EU has stumped up only $400m (£318m) for its Africa program.

Many human rights groups have criticised the EU-Turkey deal, partly due to the appalling conditions in the reception centres in the Aegean Islands, the lack of security, the slow processing and the belief that Turkey is not a safe country for refugees to be returned.

As of 20 March, only 10,000 asylum seekers had left Greece for other European countries.

But the agreement has seen the number of refugees reaching the Aegean islands fall from 2,000 per day in January and February 2016, to 40 per day in 2017. The number of deaths by drowning has fallen from 320 to single figures. Around 1,000 refugees have been sent back from Greece to Turkey, less than 90 a month.

Lawyers for Justice in Libya director Elham Saudi said of the Libya deal: “It is wrong for the EU to enter into an agreement with a country that has no concept of asylum and no refugee protection. The EU knows that torture, rape and killing occur in these camps. Even the basics are not there – there is no registration, there are no records, there is no one counting them, there is no legal process, there is no access to a lawyer, there is no accountability, there is nothing. It is a facade and yet the EU celebrates this agreement which is a way of being complicit in torture.”