A warning from 120 years ago

We’ve known about the Greenhouse effect for at least a century. I learned about it as a child in the 1960’s


More about Chamberlin: He was the first to demonstrate that the only way to understand climate change was to understand almost everything about the planet together — not just the air but the oceans, the volcanoes bringing gases from the deep interior, the chemistry of how minerals gradually disintegrated under weathering, and more.


Source: An Attempt to Frame a Working Hypothesis of the Cause of Glacial Periods on an Atmospheric Basis https://archive.org/details/jstor-300... 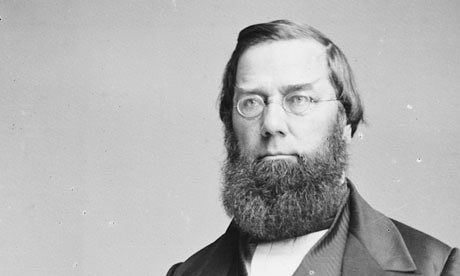 When we think of the birth of the conservation movement in the 19th century, the names that usually spring to mind are the likes of John Muir and Henry David Thoreau, men who wrote about the need to protect wilderness areas in an age when the notion of mankind's "manifest destiny" was all the rage.

But a far less remembered American - a contemporary of Muir and Thoreau - can claim to be the person who first publicised the now largely unchallenged idea that humans can negatively influence the environment that supports them.

George Perkins Marsh (1801-1882) certainly had a varied career. Here's how Clark University in Massachusetts, which has named an institute in his memory,describes him:

Throughout his 80 years Marsh had many careers as a lawyer (though, by his own words, "an indifferent practitioner"), newspaper editor, sheep farmer, mill owner, lecturer, politician and diplomat. He also tried his hand at various businesses, but failed miserably in all - marble quarrying, railroad investment and woolen manufacturing. He studied linguistics, knew 20 languages, wrote a definitive book on the origin of the English language, and was known as the foremost Scandinavian scholar in North America. He invented tools and designed buildings including the Washington Monument. As a congressman in Washington (1843-49) Marsh helped to found and guide the Smithsonian Institution. He served as US Minister to Turkey for five years where he aided revolutionary refugees and advocated for religious freedom. He spent the last 21 years of his life (1861-82) as US Minister to the newly United Kingdom of Italy.

In other words, he kept himself busy. But I would argue his defining moment came on 30 September, 1847, when, as a congressman for the Whig party (a forerunner of the Republican party), he gave a lecture to the Agricultural Society of Rutland County, Vermont. (The speech was published a year later.) It proved to be the intellectual spark that led him to go on and publish in 1864 his best-known work, Man and Nature: Physical Geography as Modified by Human Action.

More than 160 years on, it really does pay to re-read his speech as it seems remarkably prescient today. It also shows that he was decades ahead of most other thinkers on this subject. After all, he delivered his lecture a decade or more before John Tyndall began to explore the thesis that slight changes in the atmosphere's composition could cause climatic variations. And it was a full half a century before Svante Arrhenius proposed that carbon dioxide emitted by the "enormous combustion of coal by our industrial establishments" might warm the world (something he thought would be beneficial).

Yes, in his speech, Marsh talks about "civilised man" and "savages" – and the language is turgid in places – but let's cut him a little slack: this was 1847, after all. It's about half way through he gets to the bit that matters most to us today:

Man cannot at his pleasure command the rain and the sunshine, the wind and frost and snow, yet it is certain that climate itself has in many instances been gradually changed and ameliorated or deteriorated by human action. The draining of swamps and the clearing of forests perceptibly effect the evaporation from the earth, and of course the mean quantity of moisture suspended in the air. The same causes modify the electrical condition of the atmosphere and the power of the surface to reflect, absorb and radiate the rays of the sun, and consequently influence the distribution of light and heat, and the force and direction of the winds. Within narrow limits too, domestic fires and artificial structures create and diffuse increased warmth, to an extent that may effect vegetation. The mean temperature of London is a degree or two higher than that of the surrounding country, and Pallas believed, that the climate of even so thinly a peopled country as Russia was sensibly modified by similar causes.

Some of the terminology he uses is clearly a little archaic to our ears today, but, broadly speaking, his hunch has subsequently proved to be correct. You can see him grappling with concepts that we now know as the urban heat island effect and greenhouse effect.

But in the speech he also called for a more thoughtful approach to consuming natural resources, despite the apparent near-limitless abundance on offer across the vast expanses of northern America. As the Clark University biography notes, he wasn't an environmental sentimentalist. Rather, he believed that all consumption must be reasoned and considered, with the impact on future generations always kept in mind: he was making the case for what we now call "sustainable development". In particular, he argued that his audience should re-evaluate the worth of trees:

The increasing value of timber and fuel ought to teach us that trees are no longer what they were in our fathers' time, an incumbrance. We have undoubtedly already a larger proportion of cleared land in Vermont than would be required, with proper culture, for the support of a much greater population than we now possess, and every additional acre both lessens our means for thorough husbandry, by disproportionately extending its area, and deprives succeeding generations of what, though comparatively worthless to us, would be of great value to them.

The functions of the forest, besides supplying timber and fuel, are very various. The conducting powers of trees render them highly useful in restoring the disturbed equilibrium of the electric fluid; they are of great value in sheltering and protecting more tender vegetables against the destructive effects of bleak or parching winds, and the annual deposit of the foliage of deciduous trees, and the decomposition of their decaying trunks, form an accumulation of vegetable mould, which gives the greatest fertility to the often originally barren soils on which they grow, and enriches lower grounds by the wash from rains and the melting snows.


The inconveniences resulting from a want of foresight in the economy of the forest are already severely felt in many parts of New England, and even in some of the older towns in Vermont. Steep hill-sides and rocky ledges are well suited to the permanent growth of wood, but when in the rage for improvement they are improvidently stripped of this protection, the action of sun and wind and rain soon deprives them of their thin coating of vegetable mould, and this, when exhausted, cannot be restored by ordinary husbandry. They remain therefore barren and unsightly blots, producing neither grain nor grass, and yielding no crop but a harvest of noxious weeds, to infest with their scattered seeds the richer arable grounds below.


But this is by no means the only evil resulting from the injudicious destruction of the woods. Forests serve as reservoirs and equalizers of humidity. In wet seasons, the decayed leaves and spongy soil of woodlands retain a large proportion of the falling rains, and give back the moisture in time of drought, by evaporation or through the medium of springs. They thus both check the sudden flow of water from the surface into the streams and low grounds, and prevent the droughts of summer from parching our pastures and drying up the rivulets which water them.


On the other hand, where too large a proportion of the surface is bared of wood, the action of the summer sun and wind scorches the hills which are no longer shaded or sheltered by trees, the springs and rivulets that found their supply in the bibulous soil of the forest disappear, and the farmer is obliged to surrender his meadows to his cattle, which can no longer find food in his pastures, and sometime even to drive them miles for water.


Again, the vernal and autumnal rains, and the melting snows of winter, no longer intercepted and absorbed by the leaves or the open soil of the woods, but falling everywhere upon a comparatively hard and even surface, flow swiftly over the smooth ground, washing away the vegetable mould as they seek their natural outlets, fill every ravine with a torrent, and convert every river into an ocean. The suddenness and violence of our freshets increases in proportion as the soil is cleared; bridges are washed away, meadows swept of their crops and fences, and covered with barren sand, or themselves abraded by the fury of the current, and there is reason to fear that the valleys of many of our streams will soon be converted from smiling meadows into broad wastes of shingle and gravel and pebbles, deserts in summer, and seas in autumn and spring.


The changes, which these causes have wrought in the physical geography of Vermont, within a single generation, are too striking to have escaped the attention of any observing person, and every middle-aged man, who revisits his birth-place after a few years of absence, looks upon another landscape than that which formed the theatre of his youthful toils and pleasures. The signs of artificial improvement are mingled with the tokens of improvident waste, and the bald and barren hills, the dry beds of the smaller streams, the ravines furrowed out by the torrents of spring, and the diminished thread of interval that skirts the widened channel of the rivers, seem sad substitutes for the pleasant groves and brooks and broad meadows of his ancient paternal domain.
If the present value of timber and land will not justify the artificial re-planting of grounds injudiciously cleared, at least nature ought to be allowed to reclothe them with a spontaneous growth of wood, and in our future husbandry a more careful selection should be made of land for permanent improvement. It has long been a practice in many parts of Europe, as well as in our older settlements, to cut the forests reserved for timber and fuel at stated intervals. It is quite time that this practice should be introduced among us.


After the first felling of the original forest it is indeed a long time before its place is supplied, because the roots of old and full grown trees seldom throw up shoots, but when the second growth is once established, it may be cut with great advantage, at periods of about twenty-five years, and yields a material, in every respect but size, far superior to the wood of the primitive tree. In many European countries, the economy of the forest is regulated by law; but here, where public opinion determines, or rather in practice constitutes law, we can only appeal to an enlightened self-interest to introduce the reforms, check the abuses, and preserve us from an increase of the evils I have mentioned.

A footnote: it is 150 years ago this year since Marsh was personally appointed by Abraham Lincoln to be the US's first ambassador to Italy. (Marsh was buried in Rome.) Just three years later, Lincoln approved the legislation which would lead to the creation of Yosemite National Park in California. This acted as a precedent across the world for federal and state governments to purchase or secure wilderness areas so they could be protected in perpetuity from development or exploitation. It's speculation, of course, but I've always wondered whether Marsh and Lincoln ever discussed such matters, be it in person or in correspondence. Perhaps, there's a keen historian out there who knows the answer?