Everyone is saying "Kim, don't let us down. Come up with the goods". Tomorrow is the day.


Last week, Fox News dropped a bombshell report officially confirming, via anonymous FBI sources, what many had suspected for quite some time, that murdered DNC staffer Seth Rich was the WikiLeaks source for leaks which proved that the DNC was intentionally undermining the campaign of Bernie Sanders. In addition to exposing the corruption of the DNC, the leaks cost Debbie Wasserman Shcultz her job as Chairwoman.

Of course, if it's true that WikiLeaks' emails came from a DNC insider it would end the "Russian hacking" narrative that has been perpetuated by Democrats and the mainstream media for the past several months.  Moreover, it would corroborate the one confirmation that Julian Assange has offered regarding his source, namely that it was "not a state actor."

Meanwhile, the plot thickened a little more over the weekend when Kim Dotcom confirmed via Twitter that he was working with Seth Rich to get leaked emails to WikiLeaks.

Kim Dotcom Retweeted Sean Hannity
I knew Seth Rich. I know he was the @Wikileaks source. I was involved.
Kim Dotcom added,

Which was followed up by the following posts on 4Chan’s /pol/ subgroup that high-ranking current and former Democratic Party officials are terrified of the Seth Rich murder investigation.

I know for certain that the Seth Rich case has scared the shit out of certain high ranking current and former Democratic Party officials.

This is the reason why they have backed away from impeachment talk. They know the smoking gun is out there, and they’re terrified you will find it, because when you do it will bring the entire DNC, along with a couple of very big name politicians.

It appears that certain DNC thugs were not thorough enough when it came time to cover their tracks.Podesta saying he wanted to “make an example of the leaker” is a huge smoking gun.”

The post went on to claim that a "smoking gun in this case is out of the hands of the conspirators" which has resulted in near "open panic" in DC circles.


“The behavior is near open panic. To even mention this name in D.C. Circles [sic] will bring you under automatic scrutiny. To even admit that you have knowledge of this story puts you in immediate danger.

If there was no smoke there would be no fire. I have never, in my 20 years of working in D.C. Seen [sic] such a panicked reaction from anyone.

I have strong reason to believe that the smoking gun in this case is out o [sic] the hands of the conspirators, and will be discovered by anon. I know for certain that Podesta is deeply concerned. He’s been receiving anonymous calls and emails from people saying they know the truth. Same with Hillary.”

And here is the original tweet:
/pol/ News Forever‏ @polNewsForever

An Anon working in DC says that he's seeing people in a panic like never before about #SethRich. They know their about to be exposed.

Meanwhile, Kim Dotcom has promised more information will be released on his interaction with Seth Rich by tomorrow.

I'm meeting my legal team on Monday. I will issue a statement about #SethRich on Tuesday. Please be patient. This needs to be done properly.
5:57 AM - 21 May 2017

This raises several questions. First, if Kim Dotcom knew that Seth Rich was, in fact, the WikiLeaks source, why is he just now coming forward with such information? Second, while Seth Rich may explain the DNC leaks we still don't know who is responsible for the "Podesta Files" which we're certain will continue to be attributed to "Russian hackers."

Which leads to the most improtant queistion of all: is this all just another fake news diversion, or is there more to the Seth Rich murder?

The Young Turks have come out and attacked the source for the Fox News story - and this has been followed up by fake news source, the NZ Herald. 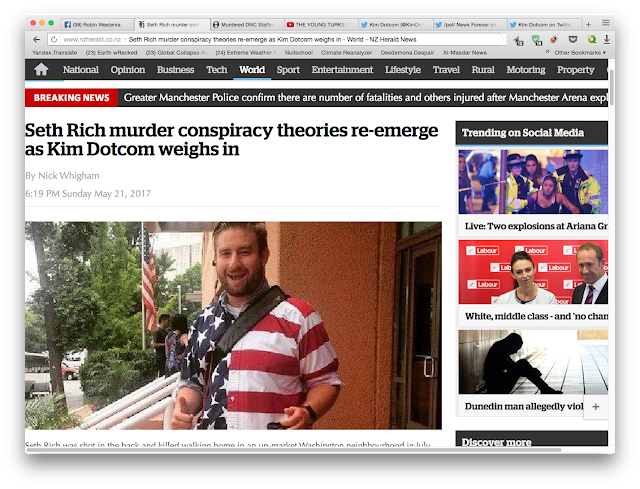 An internet conspiracy theory over the murder of a young former Democratic National Convention staffer in the US has once again reached fever pitch.

Seth Rich was shot in the back and killed walking home in an up-market Washington neighbourhood in July last year.

The death has largely gone unexplained, with Washington police suggesting it was the result of a botched robbery. But in the aftermath of the killing, conspiracy theorists claimed the 27-year-old staffer was responsible for leaking a trove of 20,000 emails stolen from the DNC servers to WikiLeaks.

The stolen materials contained explosive details of collusion between the Hillary Clinton camp and the DNC to undermine the Bernie Sanders campaign in the lead-up to the 2016 US presidential election.

This week, both Fox News and a Fox affiliate in Washington, WTTG-TV, published and aired reports which cited information attributed to a private investigator named Rod Wheeler, who claimed he had uncovered evidence showing Rich had been in contact with WikiLeaks before his death, news.com.au reports.

WikiLeaks - which is now seen by many US Democrats as a vehicle for Russian intelligence - retweeted stories containing the latest claims, which many interpreted as confirmation. WikiLeaks founder Julian Assange last year appeared to suggest Rich was the leaker.

US authorities have accused Russian operatives of being the source of the leaks.

The Fox News story was also shared by the Russian Embassy in the UK on Twitter, receiving thousands of shares. But the report has since been proven to be inaccurate. Wheeler said he had no information to that effect, and an FBI spokesman told the media that, contrary to the report, it had not conducted a forensic analysis of Rich's laptop that showed he had been in contact WikiLeaks.

A spokesman for the Rich Family, Brad Bauman, lashed out at those who continue to promote the story, which includes prominent Fox News anchor Sean Hannity.

"Anyone who continues to push this fake news story after it was so thoroughly debunked is proving to the world they have a transparent political agenda or are a sociopath," he told CNN. "It either case, they should be taken off the air because they are either blind to the damage they are doing to a murder victims family or don't care, showing a profound lack of judgment and common decency."

On Sunday, speculation that the young DNC staffer was involved in the leaks was promoted by internet millionaire and the embattled founder of Megaupload, Kim Dotcom. Dotcom tweeted that Rich was the leaker and that he himself was also involved, promising to issue a statement after meeting with his lawyers this week.

Social media has been full of people promoting the notion of a cover-up.

Things got weirder still after internet sleuths uncovered what appeared to be Rich's social media accounts, including his Reddit username, "MeGrimlock4" and Twitter handle, "@panda4progress".

His online persona revealed Rich was a huge supporter of Sanders, which conspiracy theorists hold up as evidence of his motive to leak the e-mails which showed the DNC colluded to prevent Sanders from gaining the party nomination.

In a strange development, users discovered a tweet by former DNC director of data science Andrew Therriault, which appeared to posthumously mock Rich, referring to him as an "embarrassment".

On 27 April, quoting a tweet which read, "TIL: A group of Pandas is called an 'Embarrassment' #pandafacts", Therriault tweeted: "cc: @panda4progress". The tweet has since been deleted.

Not long after, Reddit appeared to alter posts made by Rich - a big no-no from the perspective of the site's users - to remove a comment in which he shared his e-mail address, linking him to the account. 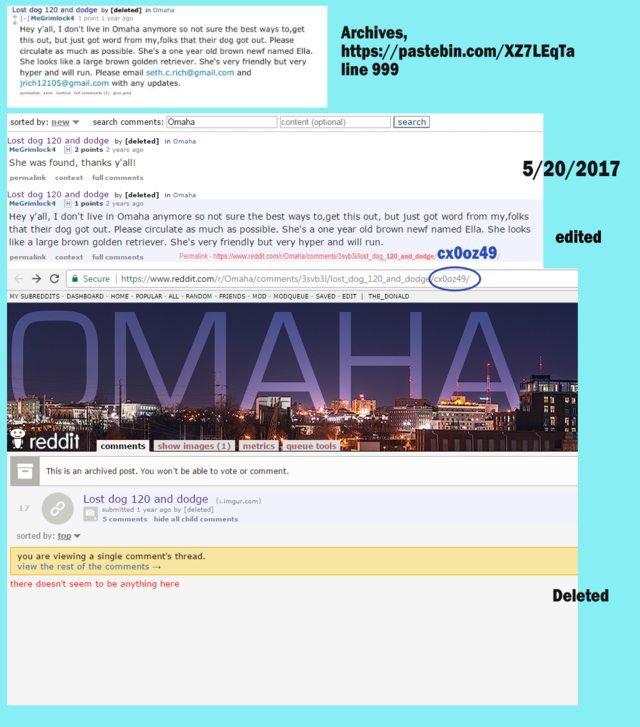 
Reddit has a strict policy against sharing personal information, but a previous case in which Reddit chief executive Steve Huffman manually altered user's comments drew ire from users and forced a public apology.

At the time, even former CEO Ellen Pao weighed in, saying she "would have immediately fired anyone" who did what Huffman did.

Meanwhile, The Washington Post has published multiple reports this weekend describing claims of a cover-up over the murder of Seth Rich as fake news.

"The re-emergence of the conspiracy theory this week, which did not lack for real news, revealed plenty about the fake news ecosystem ... in the Trump era," the paper wrote. "It also happened to cause untold pain for the Rich family, which has sent a cease-and-desist letter to the so-called private investigator who led this dive back into the fever swamp."