The liberal fascists show their spots. 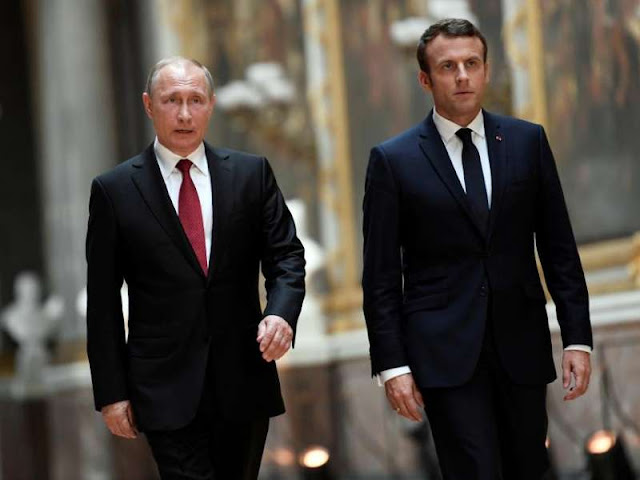 If you ever needed any more proof that the new wonder-boy French President is nothing more than a neo-liberal, globalist puppet, then look no further than Macron’s recent meeting in Paris with Syria’s opposition, known as the Riyadh-based High Negotiations Committee (HNC)…which includes political and armed groups trying to overthrow the Assad government.

Macron says he seeks to review French policy on Syria’s war with Saudi-Qatari-Turkey funded jihadists, but welcoming a terrorist organisation to Paris, one day after meeting Russian President Vladimir Putin, and days afterISIS bombed Manchester Arena, is no way to revaluate a failed western regime change operation of a sovereign nation…or maybe it is exactly the way Macron’s globalist rulers want him to behave when dealing with Syria.

The unannounced meeting with Riad Hijab and a broader delegation from the Riyadh-based High Negotiations Committee (HNC), which includes political and armed groups, came as Macron seeks to review French policy on the six-year civil war.

“The president spoke of his personal commitment to the Syria dossier and of his support for the Syrian opposition in view of a political transition,” his office said in a statement.

Opposition officials were not immediately available for comment on the meeting.

Macron’s electoral victory has offered an opportunity for Paris to examine its policy on Syria with some considering the previous administration’s stance as too intransigent and leaving it isolated on the subject.

Macron, a newcomer to international diplomacy, said on Monday that his priority in Syria was to eradicate Islamist militants.

Alongside Putin in 17th century palace of Versailles outside Paris, Macron on Monday said he had agreed to set up a working group with Russia, including to exchange information. It was not immediately clear what that would entail.

Macron’s government says it backs U.N.-mediated peace talks in Geneva. However, Macron also called for a “political and diplomatic framework to build peace” without specifying whether it was a new initiative or part of the U.N. process.

The HNC was founded in December 2015 at a conference held in Riyadh, Saudi Arabia, which was attended by around 100 delegates. At the end of the conference, a joint statement was issued to confirm the formation of “a High Negotiations Committee for the Syrian Revolution and Opposition Forces (HNC), with its headquarters in Riyadh, to undertake the tasks of choosing a negotiating delegation and to act reference point for negotiators with the representatives of the Syrian regime on behalf of the participants”.

The group’s chief negotiator, Mohammed Alloush, a member of Jaish al-Islam, resigned from the HNC in May 2016 because of the lack of progress in the Syrian peace process.

In September 2016, the HNC set out a detailed transition plan for Syria, committing the country to democratic and religious pluralism. The 25-page document was launched in London and was welcomed by the United Kingdom’s government.

In January 2017, the HNC announced that it will support the Syrian peace talks in Astana, which began on 23 January.

In February 2017, the HNC chief coordinator Riyad Farid Hijab rejected a statement by Staffan de Mistura that the latter will select delegates for the Syrian opposition in Geneva. He also objected to the participation Democratic Union Party (PYD) in the Geneva conference.

The HNC has faced criticism from Russia because it includes groups like Ahrar al-Sham and Jaysh al-Islam. Its transition plan in September 2016 was also criticized by the opposition Kurdish National Council and the Assyrian Democratic Organization due to it not addressing minority ethnic groups in Syria.

The Kurdish National Council withdrew from the HNC on 29 March 2017 in protest to the latter’s opposition to federalism and human rights for Kurds in Syria.

Riyad Farid Hijab was Prime Minister of Syria from June to August 2012, serving under President Bashar al-Assad. From 2011 to 2012, he was Minister of Agriculture.

On 6 August 2012, the Syrian government released a statement saying that Hijab had been dismissed.

Shortly thereafter a man describing himself as Hijab’s spokesman and several news organizations stated he had resigned and defected to the rebel side in the Syrian civil war.

Hijab is the highest-ranking defector from the Syrian government.