The WSJ makes a case for kidnapping Julian Assange

“(Julian Assange) may be hoping to make it to Ecuador, which is unlikely to extradite him to America. Then again, we could always seize him and spirit him here to face justice. We wouldn’t have to resort to the extradition process. The Supreme Court might even prefer it that way.”

What, precisely, is the difference between Stalinist Russia and this?

The U.S. Can Get Julian Assange 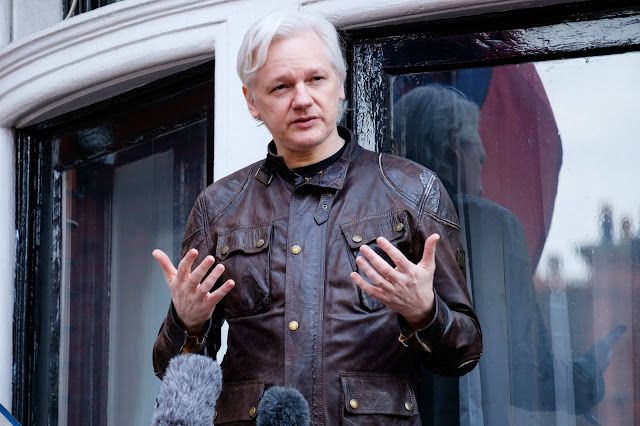 
Julian Assange is all smiles after Sweden dropped its rape charge against him. He may be hoping to make it to Ecuador, which is unlikely to extradite him to America. Then again, we could always seize him and spirit him here to face justice. We wouldn’t have to resort to the extradition process. The Supreme Court might even prefer it that way.

Take it from the late Chief Justice William Rehnquist, who wrote the opinion in U.S. v. Alvarez-Machain (1992). It suggests that if America has a hand in kidnapping a culprit from foreign shores to bring him to justice here, the Supreme Court is not going to be too particular.

I’ve written about this over the years, including in 2009, when Scotland freed Abdelbaset Ali al-Megrahi to go home to Libya. He’d been convicted for his role in bringing down Pan Am 103 in 1988. It struck me that America ought to capture Megrahi and bring him before an American court. President Obama could have acted under the precedent in the case of Humberto Alvarez-Machain, a Mexican physician.

The doctor was indicted for his alleged role in the murder of a Drug Enforcement Administration agent, Enrique Camarena Salazar. He was accused, as Rehnquist put it, of “prolonging agent Camarena’s life so that others could further torture and interrogate him.” On April 2, 1990, the doctor was, as Rehnquist put it, “forcibly kidnapped from his medical office in Guadalajara, Mexico, to be flown by private plane to El Paso, Texas, where he was arrested by DEA officials.”

A U.S. district court concluded that the DEA was responsible, even though its agents were not personally involved. Dr. Alvarez claimed his abduction, in Rehnquist’s paraphrase, “constituted outrageous governmental conduct.” A dainty district court and the Ninth Circuit appeals bench were prepared to free Dr. Alvarez.

The Supreme Court was made of sterner stuff. It did cite a precedent, U.S. v. Rauscher , which blocked the prosecution of a defendant brought to America from England for a crime not covered in the extradition treaty between the two countries. The court took the view that once the U.S. proceeded under an extradition treaty, it was bound by its terms.

But the court also cited Ker v. Illinois (1886), which involved a thief, Frederick Ker, who’d been convicted in Illinois but fled to Peru, only to be brought back to court by a Pinkerton agent. Rehnquist wrote that Ker’s “presence before the court was procured by means of forcible abduction from Peru.” But because he wasn’t brought back via extradition, the court rejected his claims to rights under extradition law.

Which brings us to Mr. Assange. If his plan is to slink to Ecuador and if the U.S. really wants him, it might do better by avoiding extradition and turning to our secret services to airlift him to stand trial in America.

Even if America kidnaps him, that might not be the end of the story. Witness the denouement of the saga of Dr. Alvarez-Machain, who was put on trial in the same district court that shrank from trying him originally. The judge acquitted him before the case went to the jury. Dr. Alvarez-Machain then sued America and the Mexicans who’d kidnapped him in league with the DEA. That case, too, went to the Supreme Court, where in 2004 Dr. Alvarez-Machain lost unanimously.
It’s not clear the U.S. wants to put Mr. Assange on trial. If it does, though, the moral of Alvarez-Machain is that it doesn’t have to be squeamish about how it gets him here, even if he’s hiding south of the border.

Mr. Lipsky is editor of the New York Sun.