Nigel Farage says the problem is much worse than previously thought.

I can find no reference to this story in the Guardian – how could it when the problem doesn’t exist? Lol

severe – as it happened 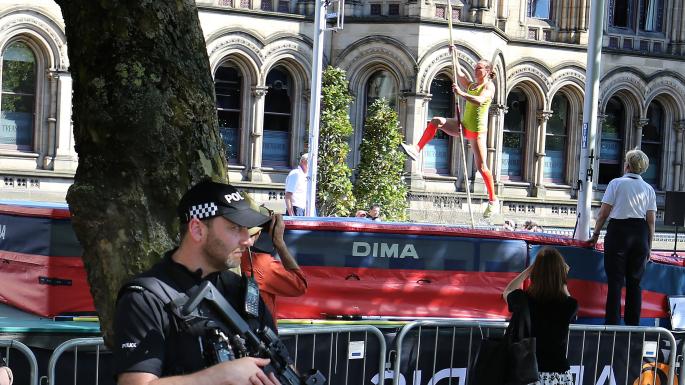 The scale of the challenge facing the police and security services was disclosed by Whitehall sources after criticism that multiple opportunities to stop the Manchester bomber had been missed.

About 3,000 people from the total group are judged to pose a threat and are under investigation or active monitoring in 500 operations being run by police and intelligence services. The 20,000 others have featured in previous inquiries and are categorised as posing a “residual risk”.

The two terrorists who have struck in Britain this year — Salman Abedi, the Manchester bomber, and Khalid Masood, the Westminster killer — were in the pool of “former subjects of interest” and no longer subject to any surveillance.

Anti-terrorism efforts came under renewed scrutiny when it emerged that Abedi, who murdered 22 people when he detonated a suicide bomb among crowds leaving a pop concert at Manchester Arena on Monday, had been a former subject of interest to MI5.

In a series of fast-moving developments yesterday and today:

● The prime minister downgraded the terror threat from “critical” to “severe” this morning, announcing that soldiers will remain deployed on the streets until Monday

● Assistant Commissioner Mark Rowley, the country’s most senior anti-terrorism police officer, said “significant arrests” meant that a “large part of the network” around Abedi had been wound up.

● Two key properties were identified: a flat in Blackley, north Manchester, where the explosives were made, and a short-term let apartment in the city centre where the device was assembled. Police said that they had “much of the risk contained”.

● It was announced that armed police would patrol some beaches this weekend as the threat level remained critical; there would also be a heavy police presence visible at hundreds of bank holiday events.

● Theresa May made the bombing an election issue by accusing Jeremy Corbyn of blaming British military action overseas for terrorist attacks in the UK. “I want to make one thing very clear to Jeremy Corbyn and to you: it is that there can never, ever be an excuse for terrorism,” she said.

● World leaders at the G7 summit in Sicily called on internet companies to act urgently and “substantially increase their effort to address terrorist content”. The prime minister said she was clear that “corporations can do more”.

Ben Wallace, the security minister, told The Times that the existence of a database of thousands of potential attackers was a stark illustration of the magnitude of the threat. “This reveals the scale of the challenge from terrorism in the 21st century,” he said. “Never has it been more important to invest in intelligence-led policing.”

MI5’s capacity to investigate is limited to about 3,000 individuals at any one time. People are added to and removed from the group of “live” suspects depending on assessments of who poses the greatest risk. When an investigation is closed, the people identified drop into a growing group whose risk is seen as reduced.

Sources say that the pool of “former subjects of interest” has swollen to 20,000 during the years of Islamist threat since 2001.

There is concern that the intelligence agencies have been poor at detecting former subjects of interest who return to extremism.

The two men who murdered Fusilier Lee Rigby in 2013 had been known to the agencies but had dropped down the priority list and their continued adherence to violent extremism was missed. David Anderson, QC, the former reviewer of anti-terrorism laws, noted concerns in his 2015 report about the “speed with which things can change” around suspects and “the difficulties in knowing how best to prioritise limited surveillance resources”. Senior police have also spoken of the difficulty in identifying the triggers that might “reactivate” extremist behaviour.

Raffaello Pantucci, director of international security studies at the Royal United Services Institute, said that the figures were “disturbing but not surprising”. He added: “For many of these people, the jihadist ideology never leaves them — it is very deeply ingrained.”

Anthony Glees, head of security and intelligence studies at the University of Buckingham, said: “To have 23,000 potential killers in our midst is horrifying. We should double the size of MI5, as we did in World War Two, and expand the number of intelligence-led police by thousands. We can’t go on as if this wasn’t happening.” Last night Ariana Grande, the American singer whose concert was targeted by Abedi, said she planned to return to Manchester to stage a benefit concert for the victims. Liam Gallagher will donate profits from his first solo gig next week to victims.

The same story carried by RT


Around 23,000 jihadist extremists currently living in the UK have been identified by intelligence services as potential terrorists, the Times reports, citing government officials. About 3,000 of those are under investigation as possible threats.

“The huge scale” of the terrorist threat in Britain has been revealed in the wake of the Manchester bombing, the Times reported on Saturday, saying the number was disclosed by unnamed Whitehall sources.

UK authorities have identified 23,000 potential jihadist extremists. The problem is much worse than we first thought. 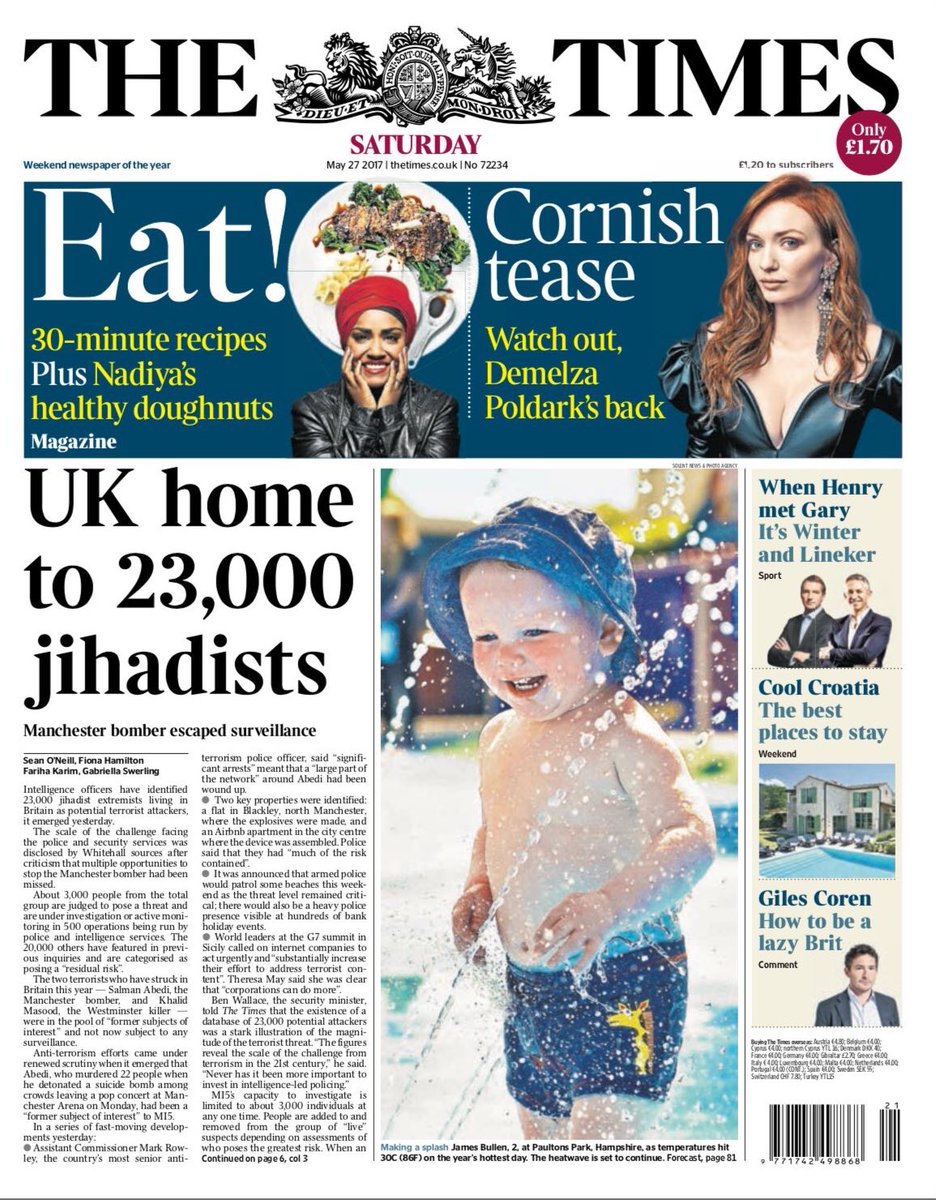 The MI5 can only investigate about 3,000 individuals at one time, the newspaper said, explaining that the list of “live” suspects is constantly updated. When those who are believed to pose a greater risk are added to the list, the investigations and active monitoring of others are closed, and they are then moved to a “former subjects of interest” group. This pool of potential attackers, categorized as posing a “residual risk,” has grown to include 20,000 people since 2001, the report said.


The man behind the recent terrorist attack in Manchester, suicide bomber Salman Abedi, who murdered 22 people and injured over a hundred at a pop concert, had been among the 20,000 who are considered “former subjects of interest,” the Times reported.

Another attacker, Khalid Masood, who rammed a vehicle into pedestrians on London’s Westminster Bridge and then stabbed a police officer to death in March, was also in the pool. Both men were no longer under MI5 surveillance.

“For many of these people, the jihadist ideology never leaves them, it is very deeply ingrained,” the director of international security studies at the Royal United Services Institute, Raffaello Pantucci, told the Times, adding that the number disclosed was “disturbing but not surprising.”

The database of potential attackers “reveals the scale of the challenge from terrorism in the 21st century,” UK Security Minister Ben Wallace said, adding that the magnitude of the threat requires investment “in intelligence-led policing.”

“To have 23,000 potential killers in our midst is horrifying. We should double the size of MI5, as we did in World War Two, and expand the number of intelligence-led police by thousands,” the head of security and intelligence studies at the University of Buckingham, Anthony Glees, told the newspaper.

Five hundred active operations are currently managed by the UK security services, Reuters reported, citing “source with knowledge of the matter.” These investigations involve 3,000 people judged as posing a threat.

A large-scale investigation unfolded in the UK this week, following the attack on the Manchester Arena concert hall. Eleven suspects are now in custody, UK Prime Minister Theresa May said on Saturday, while announcing that the security threat level has been lowered from ‘critical’ to ‘severe.’

“The public should be clear about what this means. A threat level of severe means an attack is highly likely. The country should remain vigilant,” she said.

Although a “large part of the network” believed to be connected to the Manchester attacker has been rounded up, according to the UK’s most senior counterterrorism police officer, Mark Rowley, other possible cell members might be on the loose.

Armed officers will remain deployed on the streets throughout Britain until Monday, with security stepped up at around 1,300 events over the bank holiday weekend.

Politicians may be about to use the horrific attacks in Manchester to exploit public fears and launch new policies, activists have warned.

The desire to stop another attack happening again using technological approaches and surveillance could actually lead to empowering criminals and terrorists, the Open Rights Group has warned.

Drawing attention to apparent attempts to force companies to weaken their encryption and security so that they can read everyone's messages, the organisation's executive director Jim Killock has warned against relying on security measures.