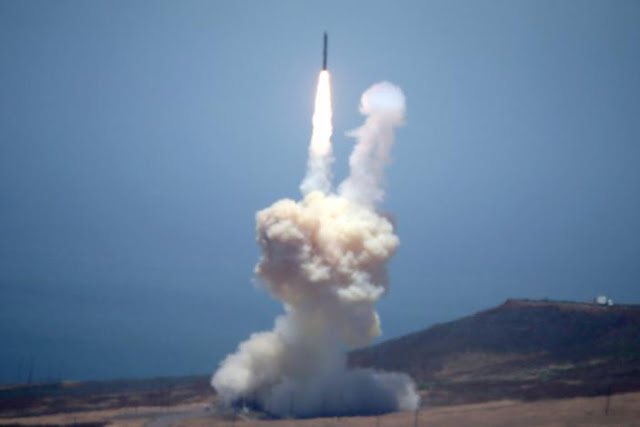 Update: according to the Pentagon, the much anticipated intercept of an intercontinental ballistic missile was a success, and the mock ICBM warhead was shot down over the Pacific "in a success for America's missile defense program."

The test was the first of its kind in nearly three years, and was the first test ever targeting an intercontinental-range missile like North Korea is developing.
The Missile Defense Agency said it was the first live-fire test against a simulated ICBM for the Ground-based Midcourse Defense (GMD) and hailed it as an "incredible accomplishment."

"This system is vitally important to the defense of our homeland, and this test demonstrates that we have a capable, credible deterrent against a very real threat," Vice Admiral Jim Syring, director of the agency, said quoted by Reuters.

"This is one element of a broader missile defense strategy that we can use to employ against potential threats," Pentagon spokesman Captain Jeff Davis told reporters.

A successful test was by no means guaranteed and the Pentagon sought to manage expectations earlier in the day, noting that the United States had multiple ways to try to shoot down a missile from North Korea.

In a just released statement, the Missile Defense Agency said that during the test, an ICBM-class target was launched from the Reagan Test Site on Kwajalein Atoll in the Republic of the Marshall Islands. Multiple sensors provided target acquisition and tracking data to the Command, Control, Battle Management and Communication (C2BMC) system. The Sea-Based X-band radar, positioned in the Pacific Ocean, also acquired and tracked the target. The GMD system received the target tracking data and developed a fire control solution to intercept the target.

Full statement from the Pentagon below:

This was the first live-fire test event against an ICBM-class target for GMD and the U.S. ballistic missile defense system.

During the test, an ICBM-class target was launched from the Reagan Test Site on Kwajalein Atoll in the Republic of the Marshall Islands. Multiple sensors provided target acquisition and tracking data to the Command, Control, Battle Management and Communication (C2BMC) system. The Sea-Based X-band radar, positioned in the Pacific Ocean, also acquired and tracked the target. The GMD system received the target tracking data and developed a fire control solution to intercept the target.

A ground-based interceptor was launched from Vandenberg Air Force Base, California, and its exo-atmospheric kill vehicle intercepted and destroyed the target in a direct collision.

Riki Ellison, founder of the Missile Defense Advocacy Alliance, described the test as "vital" prior to launch. "We are replicating our ability to defend the United States of America from North Korea, today," Ellison said.

As Reuters adds, a test failure could have deepened concern about a program that according to one estimate has so far cost more than $40 billion. In the fiscal year 2018 budget proposal sent to Congress last week, the Pentagon requested $7.9 billion for the Missile Defense Agency, including about $1.5 billion for the GMD program.

A 2016 assessment released by the Pentagon's weapons testing office in January said that U.S. ground-based interceptors meant to knock out any incoming ICBM still had low reliability, giving the system a limited capability of shielding the United States.

Prior to Tuesday's launch, the GMD system had successfully hit its target in only nine of 17 tests since 1999. The last test was in 2014. This was the first test ever test targeting an intercontinental-range missile.

Finally, now that the US has quasi Star Wars capabilities, thus voiding the existing Mutual Assured Destruction paradigm which worked as a global deterrence shield for over 60 years, some have asked if today's successful test may not have actually raised the odds of a first strike against the US.

A clip of the GMD taking off in California:

As previewed last week, on Tuesday afternoon the US began the first ever missile test involving a simulated attack by an intercontinental ballistic missile, firing off an interceptor from Vandenberg Air Force Base in California, according to a Reuters witness located at the airbase. The long-planned experiment comes amid increased tensions over North Korea’s ballistic missile tests.

As part of the historic attempt to intercept an inbound ICBM, a Ground-based Midcourse Defense (GMD) interceptor was fired from the Vandenberg. The target vehicle, designed to resemble an ICBM, was fired from Kwajalein Atoll in the Marshall Islands 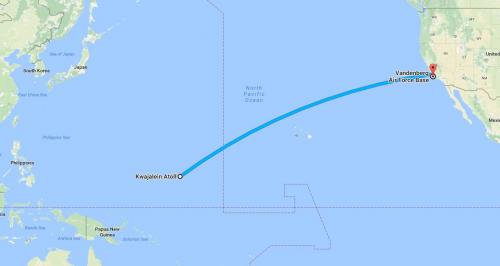 The intercept should take place shortly over the Pacific Ocean. Reuters adds that it could be several hours before the U.S. military discloses whether the Ground-based Midcourse Defense (GMD) interceptor struck its target. The Kwajalein atoll is approximately 8,000 km (4,972 miles) from Los Angeles, California.
While the test comes as fears mount about North Korea's advancing program to develop an ICBM capability, Pentagon official who spoke on condition of anonymity told Stars and Stripes last week said that Tuesday’s test was planned “years in advance” and is not a direct response to recent North Korean tests of ballistic missiles.
Despite the denial, many are skeptical: while North Korea currently lacks the capability to hit the US mainland, the US military intelligence chief recently warned that such a development is only a matter of time.
The test interceptor is equipped with an Exo-atmospheric Kill Vehicle (EKV), which is supposed to destroy the target vehicle with a direct hit. “This will be the first test of an upgraded kill vehicle, and the first test against an ICBM-class target,” US Missile Defense Agency spokesman Chris Johnson said in a statement.
Deployed in 2004 by the Bush administration, the GMD has never been used it combat. This is the first intercept test since 2014. There are currently 32 interceptor missiles in Fort Greely, Alaska and four at Vandenberg. Eight more are supposed to come on-line by the end of this year, AP reported.

Posted by seemorerocks at 12:58