A National disgrace. This government does not even intend to reduce emissions but to meet the pathetic targets by buying others' carbon credits
NZ seventh-worst on emissions of 41 nations
New Zealand's greenhouse gas emissions in 2015 were 24.1 percent higher than 1990 levels - a far cry from the country's commitment in the Paris agreement. 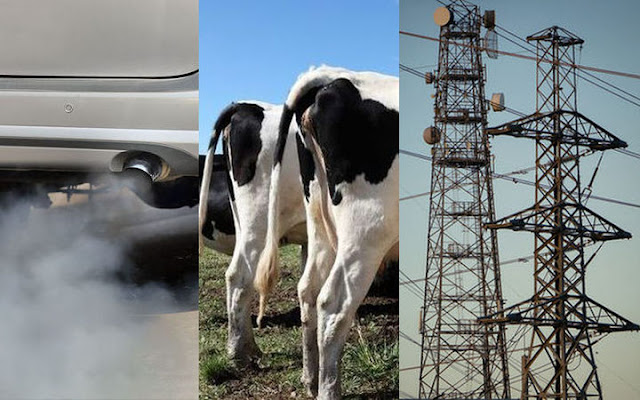 Gross greenhouse gas emissions from human activity for the year were 80.2 million tonnes of carbon dioxide equivalent, compared with 64.6 million tonnes in 1990.

Last year, New Zealand ratified the Paris Agreement on Climate Change and committed to reducing emissions by 11 percent on 1990 levels by 2030.
The government has just released its Greenhouse Gas Inventory, the official annual estimate of all human-caused emissions and removals in New Zealand.

The country is obliged to produce it as part of its commitment under the United Nations Framework Convention on Climate Change (UNFCC) which was used to reach the Paris agreement.

New Zealand's gross emissions per person were the seventh highest among the 41 industrialised countries which took commitments under the UNFCCC - even though they have fallen 0.1 percent from 2014.

The 1990-2015 inventory is used to track how well the country is doing in reaching its 2020 emissions reduction target - of a 5 percent reduction from 1990 levels - not the Paris Agreement.

The government said the country was on track to meet that target, by using a combination of carbon credits issued in 1990 and additional credits from Russia, Ukraine and elsewhere.

Breaking down the data

Gross emissions includes carbon dioxide, methane and nitrogen oxide and fluorinated gases from agriculture, energy - including transport and electricity production, waste, and industrial processes - and product use such as refrigeration and air conditioning and carbon dioxide emissions from mineral, chemical and metals production.

It also includes what is referred to as land use, land use change and forestry, which can effectively remove emissions because vegetation acts as a carbon sink.

Agriculture and energy were the two sectors that contributed the most to New Zealand's emissions profile, producing approximately 47.9 percent and 40.5 percent of the pollution respectively in 2015.

Between 1990 and 2015, agricultural emissions increased 16 percent largely due to an 88.5 percent increase in the national dairy herd size, and a five-fold increase in the application of fertiliser which contained nitrogen.

There was a 1.1 percent fall in emissions from agriculture between 2014 and 2015, when production fell because of drought conditions and a fall in milk prices.

Harvesting of trees led to a rise in emissions from the land use and forestry sector. Forests absorb carbon dioxide from the atmosphere as they grow, storing carbon in tree trunks, branches, leaves, roots and soils.

Harvested wood products and leftover roots and branches also emit carbon as they decay, are discarded from use, or are burnt