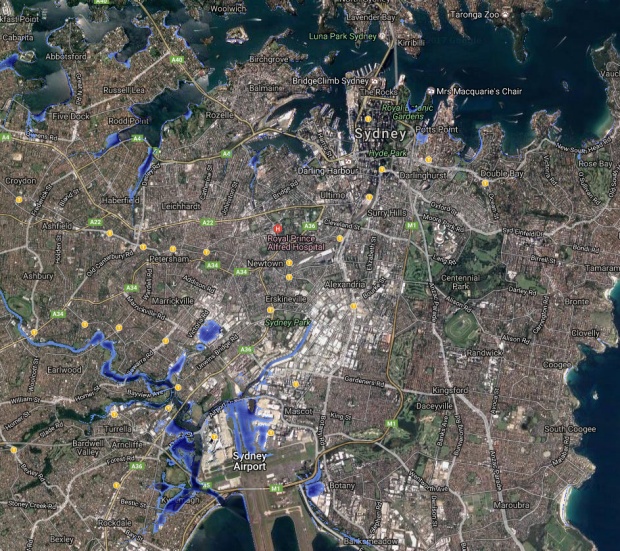 The giant ice sheets of Antarctica and Greenland are melting faster than scientists previously estimated, raising the prospect of faster sea level rise placing at risk low-lying areas of Sydney and similar exposed cities around the world.

New research, including from the US National Oceanic and Atmospheric Administration (NOAA), has lifted the "plausible" sea level rise by 2100 to as much as two metres to 2.7 meters.

That has superseded earlier estimates, such as the 2013 Intergovernmental Panel on Climate Change (IPCC), that placed the likely top range of sea level rise at about one metre if greenhouse gas emission rises continued unabated.
Those higher forecasts have now been included in new mapping by Coastal Risk Australia that combines the estimates with national high-tide data and the shape of our coastline.


The resulting maps show airports in Sydney, Brisbane and Hobart will be largely under water by 2100 if that two-metre rise happens.

Other areas at risk in Sydney from such a rise include Circular Quay, Wentworth Park, the Royal Botanic Gardens, Woolloomooloo and Rose Bay. (See map below of indicative water-level increases.)

"Our worst case scenario [for 2100] is now looking three times worse than it did previously," said Nathan Eaton, a senior principal with NGIS, a digital mapping consultancy that compiled the maps. Among exposed areas of other states are the Port of Melbourne, St Kilda and Docklands in Melbourne, parts of Noosa, the Gold Coast and Port Douglas in Queensland, and the WACA ground and Cottesloe beach in Perth, WA.

"Every state has got an area that's massively different [from previous forecasts for 2100]," Mr Eaton said. "For a lot of low-lying areas, it makes the inundation that much further inland."

NOAA estimates global mean sea levels have risen about 3.4 millimetres a year since 1993, roughly double the average rate of increase during the 20th century. (See chart below).

Even the last century's pace of increase was the fastest in at least 2800 years, NOAA said.

Global warming is driving the increase in sea levels by melting land ice - such as glaciers and ice sheets - and from the thermal expansion of the warmer oceans.

John Church, a global sea level expert at the Climate Change Research Centre at the University of NSW, said other new research indicated Antarctica's contribution to rising seas appears to particularly sensitive to carbon emissions rates - underscoring the urgency to reduce them.

"With 'business as usual' emissions, the questions are when, rather than if, we will cross a two-metre sea-level rise," Professor Church said. "This scenario would result in major catastrophes and displace many tens of millions of people around the world." 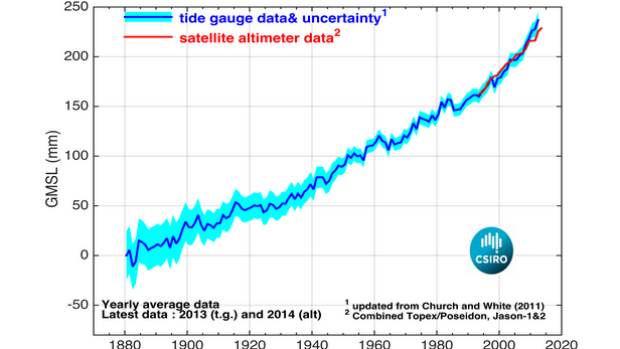 Serena Lee, a research fellow and coastal dynamics specialist at Griffith University, said the rate of Antarctic ice melt was "a great unknown", limited by the relative lack of long-term data and the region's inaccessibilityд.

Of particular concern was the melting of the ice sheets from below of ice sheets as they come in contact with warming seas.

The newest studies indicate a two-metre rise by 2100 "would probably be more towards the conservative mean" of outcomes, Dr Lee said.

The mapping tool - which Coastal Risk say should not be relied upon for site specific decision making - may itself underestimate the speed threats will increase for some localities.

Some areas of Australia, particularly the north, are recording much higher rates of sea level increase than the global average, Dr Lee said.

The mapping also doesn't take into account the impacts of more extreme weather, such as the destructive storm surge triggered by last June's huge east coast low off NSW.

Cyclone Debbie also caused severe flooding in northern NSW in some of the regions in the state that are also particularly exposed to rising seas.

Even with those uncertainties, the updated mapping "can't do anything but help someone's understanding" of those changing coastal, ocean and flooding processes, Dr Lee said.