Ice breaking up in Chukchi Sea

How are things going to look in September? 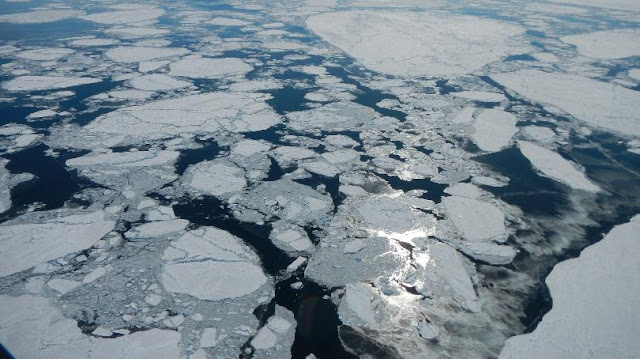 ANCHORAGE (KTUU) - For the past eight years in March and April, biologists with the U.S. Fish & Wildlife Service have flown to the ice of the Chukchi Sea to study polar bears. This spring, they saw something that had never witnessed before.

Wilson says in less than a week, the sea ice broke up and shifted quickly to the north. The breakup happened faster and earlier than scientists had seen before, forcing them to cut short their research trip.

"That last week that we were capturing, it kind of broke apart and we were flying from big pans [of ice] to big pans," Wilson said. "Actually, catching right along the ice edge... is typically another 100 or 200 miles to the south of us, most years."

During the research trip, scientists darted 48 bears from helicopters, then they examined the bears as part of a long-term study.

According to Wilson, the bears seemed to know the early sea ice breakup was coming, and they moved north sooner than usual.

"They're coming on shore more frequently [and] staying on shore for longer periods of time," said Wilson. "We've seen a 75 percent reduction in kind of optimal summer sea ice habitat for bears."

What scientists aren't sure of is how much the polar bears will be able to adapt, if predictions about future sea ice reductions come true.

"I think probably the fundamental thing - what we're trying to figure out - is how exactly is the Chukchi population being affected by the sea ice," said biologist Michelle St. Martin. "Right now, with what very little knowledge we have, they seem to be doing okay."

"In Norway, in Greenland, in Hudson Bay as well as the Beaufort and Chukchi, everybody who was out on the sea ice this spring was saying it was kind of the worst ice conditions that they've seen," Wilson said.

Scientists say polar bears in the Beaufort Sea are not doing as well as those in the Chukchi, because the water along the coast is deeper. With less sea ice, scientists say it makes it more difficult for the bears to hunt