The image below shows sea surface temperature anomalies over the Arctic on July 27, 2015. 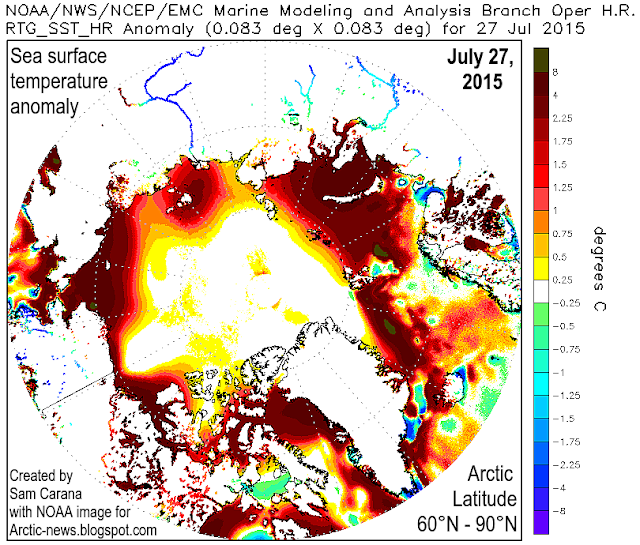 The image below shows sea surface temperature anomalies on July 28, 2015.

There is a growing chance that the sea ice will collapse over the next few weeks, due to heavy melting and storms speeding up the flow of sea ice out of the Arctic Ocean into the Atlantic Ocean.

An example of such storms is shown on the animation below. This is a forecast for July 31, 2015, showing cyclonic winds at the center of the Arctic Ocean, with strong winds moving sea ice down Fram Strait.

The above situation alone is not likely to trigger sea ice collapse. It is more likely to be short-lived. However, there is a growing possibility for such storms to emerge and drive the melting sea ice out of the Arctic Ocean into the Atlantic Ocean.

As the situation in the Arctic further deteriorates, feedbacks can be expected to kick in with growing strength.

Another feedback is a changing jet stream (as illustrated in above animation), that can be expected to causing increasingly intense storms over the Arctic to emerge. Such storms can mix down warm surface water all the way to the bottom of the seafloor, especially in the many places where the Arctic Ocean is very shallow. This can in turn cause destabilization of hydrates resulting in huge amounts of methane to be abruptly released from the seafloor.

Methane itself is yet another feedback that will accelerate warming in the Arctic, in turn threatening to trigger further methane releases in a spiral of self-reinforcing positive feedback loops.

The situation is dire and calls for comprehensive and effective action as discussed at the Climate Plan.