US Recession Imminent - World Trade Slumps By Most Since Financial Crisis

As goes the world, so goes America (according to 30 years of historical data), and so when world trade volumes drop over 2% (the biggest drop since 2009) in the last six months to the weakest since June 2014, the "US recession imminent" canary in the coalmine is drawing her last breath...

As Wolf Street's Wolf Richter adds, this isn’t stagnation or sluggish growth. This is the steepest and longest decline in world trade since the Financial Crisis. Unless a miracle happened in June, and miracles are becoming exceedingly scarce in this sector, world trade will have experienced its first back-to-back quarterly contraction since 2009.

Both of the measures above track import and export volumes. As volumes have been skidding, new shipping capacity has been bursting on the scene in what has become a brutal fight for market share[read… Container Carriers Wage Price War to Form Global Shipping Oligopoly]. 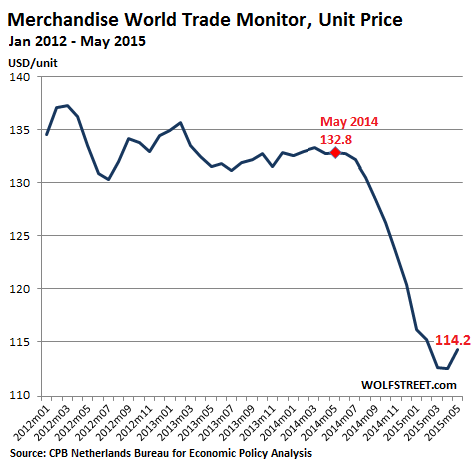 World trade isn’t down for just one month, or just one region. It wasn’t bad weather or an election somewhere or whatever. The swoon has now lasted five months. In addition, the CPB decorated its report with sharp downward revisions of the prior months. And it isn’t limited to just one region. The report explains:


The decline was widespread, import and export volumes decreasing in most regions and countries, both advanced and emerging. Import and export growth turned heavily negative in Japan. Among emerging economies, Central and Eastern Europe was one of the worst performers.

Given these trends, the crummy performance of our heavily internationalized revenue-challenged corporate heroes is starting to make sense: it’s tough out there.

But not just in the rest of the world. At first we thought it might have been a blip, a short-term thing. Read… Americans’ Economic Confidence Gets Whacked