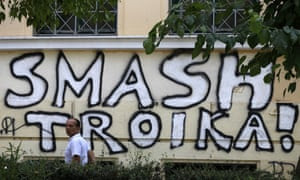 Over in Athens, Tsipras is answering questions in parliament about the parallel payment system set up in the event of “Grexit”. He has denied that his government had a “secret plan” to take Greece out of the euro.

The Greek prime minister confirmed that he authorised his former finance minister Yanis Varoufakis to draw up contingency plans in case the country was forced to leave the euro, calling it the obligation of a responsible government, Reuters reports. He told parliament:

We didn’t design or have a plan to pull the country out of the euro, but we did have emergency plans. If our partners and lenders had prepared a Grexit plan, shouldn’t we as a government have prepared our defense?”

This week Varoufakis caused outrage in Greece when he admitted he had made secret preparations to hack into citizens’ tax codes to create a parallel payment system in case Greece was forced to leave the euro.

Tsipras: if we had a secret plan with Varoufakis then why didn't we implement it? Why didn't we go for a Grexit with 62% of No?

'Next time you go looking for scandals, take a look at your own party,' #Tsipras tells PASOK's Gennimata #Greece 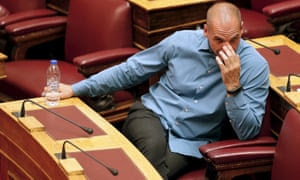