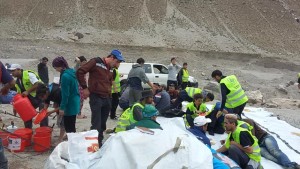 If you lived during the 1880s, when the globe was one degree Celsius cooler than it is now, you’d see far less in the way of heatwaves. But an immense vomiting of greenhouse gasses into our atmosphere and oceans by fossil fuel industry since that time has greatly multiplied these periods of extreme temperatures. So much so that you are now four times more likely to experience a heatwave anywhere on the globe at any given time than you were 135 years ago.

Heatwaves, depending on their intensity, can have serious consequences. The most direct impact is due to the excess heat itself. In the more extreme instances, heatwaves during recent years have featured an ominous capacity to hospitalize tens of thousands. These heat stroke victims, in the worst cases, perish. Such was the case for India and Pakistan this year where hundreds tragically lost their lives due to the impact of increased heat alone.

But if heatwaves occur in regions where glaciers still exist, the impact can be even more profound.
Glacier Outburst Flood In Tajikistan

(“The lake disappeared and turned to salt…” Melting of glaciers in Tajikistan is having a far-reaching impact. This UN-based program describes how the lives of Tajikistan’s people are being threatened by water loss due to glacier decline. But the impacts of glacier outburst floods can be more directly destructive.)
In Tajikistan, the heat is bringing with it a great decline in high elevation glaciers. Some have already disappeared. It’s a loss resulting in severe impacts to both energy and water security for the country. But perhaps even more disturbing is what happens when water is suddenly released from the dwindling glaciers.
Such was the case with Tajikistan this month. Beginning on July 16, an oppressive heatwave settled over this Central Asian nation. Temperatures rocketed to record levels. Baking its broad mountains — valleys, slopes and glaciers alike.
Crammed between Afghanistan, Pakistan, China, Kyrgyzstan and Uzbekistan, Tajikistan squats along the northwest boundary of the Tibetan Plateau. The upthrust of great glacier-capped peaks tower over this country. Peaks whose heads are loaded with a great volume of ice that is now being forced to rapidly melt.
This month’s record heatwave dealt a terrible blow to that ice. The glaciers, of which Tajikistan boasts 8,492, were already greatly weakened by a 3 degree Celsius temperature increase over the past five years. All it took was the shove of the most recent temperature surge to push some of these to the breaking point. By Tuesday, a great outburst flood had ripped through the mountain valleys of the Central Asia country. The outburst flood waters roared out, overtopping rivers — washing away more than 50 homes, cutting off major roadways, and driving 620 persons into government disaster shelters.
Unfortunately, this most recent climate change mass casualty event may be just one of many. In Tajikistan, a mud dam has developed along the path of major glacial melt. Water pressure is building behind the dam. Should it release, more than 30,000 people will be in the path of the outburst food.

Risk of Outburst Flooding Near Large Glaciers is a Global Hazard

All throughout the Tibetan Plateau region glacial outburst floods related to human-caused warming are on the rise (see the glacial megaflood). As much as 70 percent of the ice within the great Himalayan glaciers could melt out by 2100 under business as usual fossil fuel burning. The result would be a crescendo of glacial outburst floods followed by a period of drastically increased aridity for the lands around Tibet.

(The high elevation of glaciers combined with the vastness of their captured water and the often steep grades upon which they perch can generate violent flooding in the event of rapid melt. In many instances, silt from glacial outflows can develop a dam downstream of the glacial flood. Such dams are often unstable and can be subject to catastrophic collapse. In the worst cases, ice dams can form in the interior sections of very large ice sheets — such as those seen in Greenland and Antarctica. Glacial outburst floods due to such melt and ice dam formation in the major ice sheets are catastrophic events of geological scale and impact. Image source: ADT.)

Glacial outburst floods are sudden, powerful, violent, and difficult to predict. They are limited only by the amount of water the glaciers themselves release — ice masses that hold volumes of water often measured in cubic kilometers. The drastic impacts and terrible violence due to this kind of flooding was also recently witnessed during 2013 in Kedarnath, India. And what we see in Tajikistan and India during recent years is, sadly, just a taste of what’s to come in a fossil fuel emissions warmed world.

Finally, in this narrative, we cannot ignore potential glacial outburst flood impacts from melting over the Greenland Ice Sheet and Antarctica. And unlike Tibetan glacial melt, potential outburst flood events issuing from Greenland or Antarctica are a hazard of global scope. Such events would likely be driven by extended periods of rainfall over the ice during summer heating events. An ominous melt-driving phenomena that science is just now starting to track. 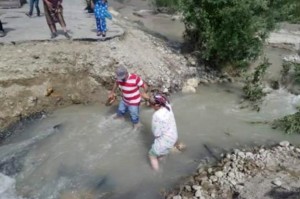