Tell me that I am wrong, but I have observed that the Guardian presents climate change science like no other daily newspaper but tends to void discussion of events like the el-Nino and by so doing pushes the whole thing into some theoretical future. 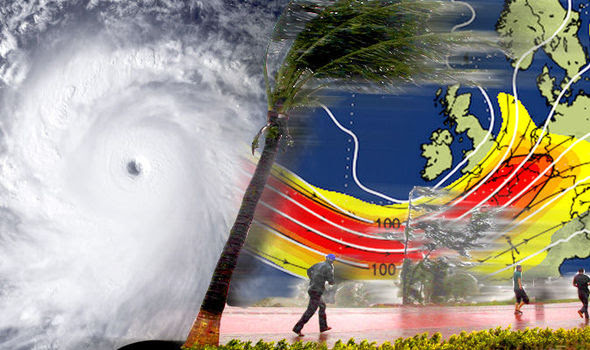 Climate scientists warned temperatures in the Pacific have increased by THREE degrees Fahrenheit in recent weeks as ocean winds have weakened.

The so-called El Nino phenomenon, which has a huge impact on the world's weather, has only been stronger twice before in recorded history - the last time in 1997, when a series of violent 100MPH Atlantic storms slammed into the UK.

And experts claimed this year's El Nino is STILL strengthening and could soon break all historical records with the extreme weather patterns lastng until next Spring - meaning Britain could face one of the worst winter storm seasons in living memory.

Meteorologist Leon Brown, of The Weather Channel UK, said the super-strength El Nino could even dislodge the jetstream, leading to more unstable weather in the UK this autumn.

He said: "A more mobile weather pattern through winter increases the risk of a wetter, stormier season in the UK.

“However it is a very powerful phenomenon and has knock-on effects across the globe in America, Asia, Australia and Europe.

“There are signs that this year a significant El Nino is building. We think it could drive a strong jetstream which can lead to a more mobile weather pattern and  very changeable and stormy weather as we head into winter." 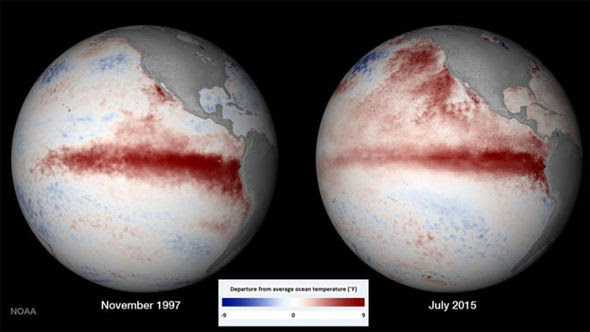 
It is a very powerful phenomenon and has knock-on effects across the globe in America, Asia, Australia and Europe
- Meteorologist Leon Brown, of The Weather Channel UK

He added that although Pacific cyclones do not usually affect our weather, due to the high volume being caused by El Nino - there have been a record 19 so far - there is a chance one could steer off course.

“One of these could move northwards and across China,” he said.

“Then it can have an effect on the jetstream by nudging it out of its current position.

“Depending on which way the jet is pushed by the storm, it will lead to cooler weather or milder more unstable conditions.”

Earlier this year oceanologists and meteorologists confirmed a pattern of warming driven by a weakening of sea winds had started in the waters around Peru.

However in the past few weeks experts say it has escalated with the strongest event for at least 50 years or even on record now likely.

El Nino is linked to major global climate events including weak monsoons in India, heavy rain and storms in North America and Europe including the UK, and floods in Australia.

Experts are concerned it is being stoked by the large number of significant tropical storms which have swept the region since the start of summer.

Three times the normal number of cyclones have developed over the now exceptionally warm Pacific waters with 19 recorded so far. 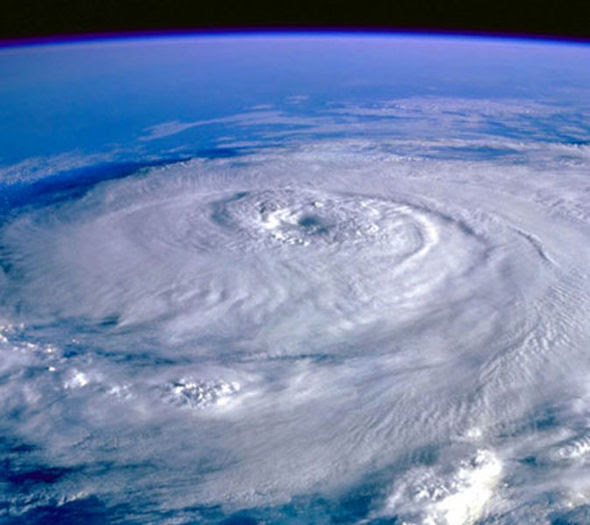 The super-strength El Nino is already causing huge cyclones to form in the Pacific
El Nino - which means ‘the boy child’ because it was first observed at Christmas - is the result of ocean warming in the eastern Pacific.

Ocean currents are typically driven by easterly ‘Trade Winds’ which push warm water away from South America and towards Asia.

The catalyst for an El Nino event is a weakening of these winds which can be replaced altogether by westerlies blowing towards South America.

Warm water accumulates around the coast of Peru while ‘upwelling’ - the rising of cold water to replace lost surface water - is hampered.

The overall effect is an increase in temperature of the eastern Pacific which although only is a by few degrees, has major global knock-on effects or ‘teleconnections’.

The most immediate consequence of El Nino over the past weeks has been a run of typhoons driven by warm water evaporating to create a moist and very unstable atmosphere over the Pacific.

A steeper temperature and pressure gradient between the tropics and the polar regions is now pulling the jet stream over northern Europe and America.

Just exactly how El Nino plays out in the UK and Europe over the next few months is dependant on the influence of another factor - the North Atlantic Oscillation (NAO).

Currently the NAO is in a positive phase - the result of a semi-permanent low pressure system over Iceland deepening while pressure rises in the Bermuda region.

This creates a large pressure gradient across Europe helping westerly winds strengthen and directing Atlantic storms on a northerly track across north Europe.

Mr Brown said the delicate balance between these two major influencers will govern just how Britain and the rest of Europe is affected by El Nino.

“There are many factors which will affect what happens,” he said.

“Some experts say there are certain effects on the weather caused by El Nino, others say different things, the truth is there are many factors which come into play and it is uncertain.

“Without a doubt though, El Nino does have a significant impact - affecting the monsoon in India, the ocean currents around South America and the weather in Europe and across the United States.”

Dr Nick Klingaman, climate scientist from the Department of Meteorology at the University of Reading, said because observational records are still scarce it is difficult to predict the outcome of this year’s El Nino.

He said it is already the third biggest on record and is showing signs of becoming the most significant event ever seen.

He said the main effects will hit Asia and America with the UK and Europe impact this year still very uncertain.

“El Nino affects northern Europe and America because of changes to air currents in the tropics which then reach the extra-tropical Pacific and then the Atlantic,” he explained.

“In the UK there is a slight tendency towards cooler winters but there is evidence showing that the impacts in early winter can differ from later on in the season.

“In the US the weather is more governed by the Pacific so El Nino has a greater effect there, the UK and Europe is more Atlantic driven.”

During an El Nino event sea level rises by as much as 20 centimetres in the eastern Pacific while the temperature lifts by around 7C.

As El Nino dies down circulation returns to normal although currents can swing in the other direction producing a cooling effect along the South-American coast called La Nina - ‘the girl’.

The current El Nino event is under the watchful eye of meteorologists across the world as it can devastate farming and fish harvests.

AccuWeather’s global weather centre said the world could be facing the strongest El Nino in 50 years.

It threatens storms in parts of the US including California, heavy rain and floods in western Australia and an unsettled UK winter.

”Confidence continues to grow that this El Niño will be one of the stronger El Niños over the past 50 years.

”El Niño typically reaches its peak during the December through February period.

“The strongest El Niño on record since the beginning of the 20th century occurred during 1997-98.”

He said the stronger it turns out to be the more effective it will be in dragging the jet stream southwards over Europe.

When this rapid current of air is positioned over the continent it steers storms in from the Atlantic to America and then towards northern Europe and the UK.

Between 1997 and 1998 California was hit by frequent storms with record rainfall recorded in parts during February.

February 1998 is the wettest February on record in downtown Los Angeles with 13.68 inches of rain falling that month.

The developing El Nino is being driven by another cyclical weather phenomenon called the Madden-Julian Oscillation (MJO).

The MJO is a pulse of cloud and rain which works its way eastwards around the globe in tropical regions often starting in the Indian Ocean.

Strong westerly winds associated with the latest MJO event are enhancing  El Niño by pushing warm waters in the western Pacific towards the east, according to the UK Met Office.

Meteorologist Scott Sutherland, of the Weather Network, said typhoon activity in the Pacific driven by El Nino could also be fuelling the cycle.

He warned this year could see a repeat of the 1997/98 ‘super’ El Nino with its effects lasting until next spring.

He said: “This year's unusual El Niño pattern in the Pacific Ocean has an excellent chance of persisting through this year, and all the way until spring of 2016.

“It is already forecast to be a significant event, with sea surface temperatures likely reaching at least 1.5C above normal in the Central Pacific - the same intensity as the 1986/87 El Niño.”

Mr Brown said as each El Nino is unique it is almost impossible to look back over records to work out what the overall outcome will be.

He said, however, that compared to previous  records this year’s event is unusually powerful and is continuing to strengthen.

He said: “It is unusual for the El Nino to gain so much strength early in the year.

“Other strong events develop late summer to autumn, so we are in uncharted territory trying to forecast the global influences.”

Posted by seemorerocks at 16:34