The British history they don't want you to see

While Britain and other countries turn a blind eye to the rise of nazism in Ukraine and Europe this becomes very relevant.

The video of a young future queen practising a nazi salute is not the point, but the support of a whole ruling class of Britain for Hitler is.

While every country has dark spots in their history, Britain is the  Land of the Double Standard and excels in lecturing other countries, above all Russia. 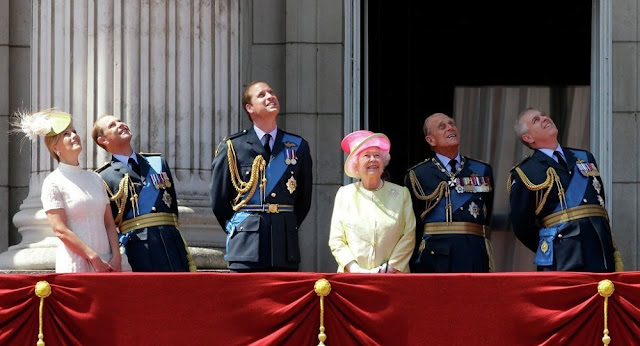 A 17-second video depicting young Queen Elizabeth II performing a Nazi salute has prompted a fierce debate among experts and the public. What other disturbing facts have the Allies swept under the carpet?

While discussing the victory in the Second World War, historians usually praise Russia, Great Britain and the United States for their joint contribution in defeating Nazism — the true plague of the 20th century.

Surprisingly, the West now turns a blind eye to the emergence of neo-Nazi movements in Eastern Europe and in the Baltics, demonizing the USSR and today's Russia instead. Has this historical lesson already been forgotten?

Unspoken Story of Indian Holocaust: UK Remains Silent About Its Atrocities
The West is still in denial of the fact that the Anglo-Saxon political and financial establishment played a significant role in the Third Reich's rise. Furthermore, some representatives of the British nobility even went so far as to openly support Adolf Hitler, kicking off their own fascist organizations and conspiring with Nazi Germany.

Paradoxically, back in the early 1930s neither London, nor Washington considered Hitler's Third Reich as a "threat," facilitating the "Nazi economic miracle" and the industrial growth of the would-be military monster.

After Adolf Hitler and his Brownshirts seized power in Germany in 1933, Britain started "grooming" Nazi Germany "as best as she could," American economist Guido Giacomo Preparata narrated in his book "Conjuring Hitler: How Britain and America Made the Third Reich."

In July 1934 Britain and Germany concluded the Anglo-German Transfer Agreement — one of the "pillars of British policy towards the Third Reich." By the end of the decade Nazi Germany had become Britain's "principal trading client."

Furthermore, in December 1934, Montagu Norman, the Governor of the Bank of England from 1920 to 1944, "advanced the Nazis a loan of about $4 million in order to 'facilitate the mobilization of German commercial credits': that is new money to pay old debts — or better said, a gift," Preparata elaborated.

And that is not all. Both Britain and the US made a number of highly lucrative arms deals with Nazi Germany. For instance, Vickers-Armstrong, the prestigious British arms manufacturer, provided Berlin with heavy weaponry.

When asked in 1934 to give assurance that the company was not used for secret rearmament of Germany, Chairman of Vickers Herbert Lawrence answered evasively: "I cannot give you assurance in definite terms, but I can tell you that nothing is done without the complete sanction and approval of our own government."

Meanwhile, the US was selling Nazi Germany most advanced airplane engines, while American companies Pratt & Whitney, Douglas, Bendix Aviation, to name but a few, provided German companies — BMW, Siemens and others — with patents and military secrets, Preparata pointed out.

According to the author, for the British and American establishement Nazism was seen as a convenient way of destabilizing Europe and turning it into a big unified market place, as well as a driving force that could dismantle the USSR.

Sir Oswald Mosley and the British Union of Fascists

"It seems impossible to believe that the people of such an entrenched democratic country as Great Britain could ever harbor mainstream fascist leanings. However, fascism was not always such a vilified ideology in the West. In the late 1920s and 1930s in Great Britain, fascism was often admired by the public," wrote US historian Bret Rubin, Princeton University, in his article "The Rise and Fall of British Fascism: Sir Oswald Mosley and the British Union of Fascists."

According to the scholar, the earliest fascist groups in Great Britain emerged in the 1920s, including the British Fascisti, the National Fascisti and the Imperial Fascist League. However, these organizations lacked both leadership and a coherent ideology.

However, in 1932 British aristocrat Sir Oswald Mosley, 6th Baronet and popular ex-member of Parliament, founded the British Union of Fascists (BUF), launching "fascism into the British mainstream." The organization swiftly brought together alomost 40,000 new members. Although Oswald Mosley failed to make further political headway, he attracted a lot of followers and established close ties with top Nazi officials, including Reich Minister of Propaganda Joseph Goebbels and the infamous German Fuhrer.

In 1940, the BUF leader along with other active British fascists was interned under Defence Regulation 18B and his party was proscribes. However, in 1943 Mosley and his wife were released because of Sir Oswald's "poor health."

Interestingly enough, neither Mosley's chronic disease, nor the British government, prevented the infamous British fascist leader from continuing his work after the Second World War. He formed the Union Movement and made a series of vain attempts to return into politics. His speeches attracted British youths and in 1977 he was even nominated as a candidate for Rector of the University of Glasgow.

In 1940, the BUF leader along with other active British fascists was interned under Defence Regulation 18B and his party was proscribes. However, in 1943 Mosley and his wife were released because of Sir Oswald's "poor health."
Interestingly enough, neither Mosley's chronic disease, nor the British government, prevented the infamous British fascist leader from continuing his work after the Second World War. He formed the Union Movement and made a series of vain attempts to return into politics. His speeches attracted British youths and in 1977 he was even nominated as a candidate for Rector of the University of Glasgow.

What Secrets is Buckingham Palace Hiding?

Mosley was not the only aristocrat echanted by Nazi imperial ideas. The British king, Edward III, who gave up the throne to marry American divorcee Wallis Simpson, openly sympathized with the Nazis.

British diplomat Sir Robert Gilbert Vansittart wrote in his diaries that in the early 1930s Edward, then the Prince of Wales, expressed his full support to Hitler's dictatorship, turning a blind eye to the persecution of Jews.

After abdicating in 1936, Edward, who became the Duke of Windsor, visited Germany in 1937 and met Adolf Hitler personally. Confidental data, released in 2003, indicated that Nazi officials planned to reinstall him as a king once Germany invaded Great Britain.

Curously, the Duke's sympathies with Hitler were not unusual for those of his class at this time. According to some reports, George VI and his wife wanted to avoid a direct military conflict with Nazi Germany at all costs and sent birthday greetings to Adolf Hitler weeks before he invaded Poland.

Edward VIII reviewing a squad of SS with Robert Ley, 1937

Baron Gunther von Reibnitz, the father of Princess Michael of Kent, was a Nazi party member and a honorary member of SS. Duke of Saxe-Coburg and Gotha Charles Edward, the brother of Princess Alice, officially joined the Nazi party in 1935 and gained the rank of Obergruppenführer. He also served a member of the German Reichstag.

Renown historian and sociologist Manuel Sarkisyanz  revealed in his book "From Imperialism to Fascism: Why Hitler's India Was to Be Russia" that the "longlist" of Great Britain's open sympathizers of fascism also included W. Churchill's son Randolph, the family of Lord Ridsdale, Lord Lamington, Lord Londonderry, and sociologist Houston Chamberlain.

It is worth mentioning, that aforementioned Montagu Norman, 1st Baron Norman, the Governor of the Bank of England, was a close friend of German Central Bank President Hjalmar Schacht, a devoted supporter of Adolf Hitler and his Nazi party.
Manuel Sarkisyanz highlighted out that Hitler himself borrowed much of his ideas from racist British scholars. The infamous Furer considered ruthless British colonial rule in India a model for his future "colonial Russia."

Remarkably, eugenics, a doctrine aimed at confirming the concept of "white supremacy," was "invented" in Great Britain and then enthusiastically adopted by Nazis.

According to British and German racists, the Anglo-Saxons (including Germans), were destined to dominate the world, Sarkisyanz exposed.

Rather embarrassingly, it was the famous author of "The Invisible Man," Herbert Wells, who stated laconically: "There is only one sane and logical thing to be done with an inferior race, and that is to exterminate it."

Unsirprisingly, Buckingham Palace has not rushed to open its archives and unveil the truth about relations between the Windsors, the British aristocracy and the Nazis. According to some experts, much of the British royal correspondence documenting their ties with top Nazi officiails was destoryed.

A 17-second piece of footage, recently released, depicts then seven-years-old Queen Elizabeth II raising her arms in a Nazi salute