The Guardian is a right wing newspaper now

This article made one thing clear to me. The old Trust that ran the Guardian is long-since gone.  I used to be an avid reader of the Guardian, but that was in the 1990's and mostly before 9/11.

Now the Guardian is a right-wing newspaper and one of the mainstays of Empire. 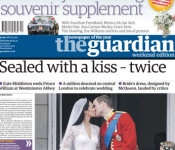 The Guardian has become a liberal frosted version of The Daily Mail. You think not? Read on…

Like the BBC – The Guardian is not independent, the old Scott Trust was wound up in 2008 and replaced by a limited company of which venture capital firm Apax Partners is the sole shareholder.

Apax Partners appoints a board to run the show – the composition of which might startle those who still regard The Guardian as a left leaning newspaper.

Nick Backhouse – On the board of the bank of Queensland, formerly with Barings Bank.

Ronan Dunne -  On the Telefónica Europe plc board, Chairman of Tesco Mobile. He has also worked at Banque Nationale de Paris plc.

John Paton – CEO of Digital First Media – a very large media conglomerate which was sued successfully in the U.S. for rigging advertising rates.

Katherine Viner – Startlingly not a banker, in marketing or venture capital. She is I gather (gulp) a journalist.

the only remaining guy is the secretary Philip Tranter – but don’t worry, he is a proper sort from some posh law firms in London.

If any of the members of the Guardian Media Group get bored they can surely get a slot with the BBC Trust which is also stuffed full of bankers and establishment big wigs. 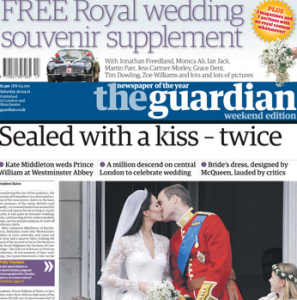 Note the total absence of any trade unionists, social workers, activists or erm journalists (save for Editor in chief Ms Vine).

The Guardian is owned by a venture capital firm and run by people predominantly from banking, venture capital and marketing – with all manner of connections to companies like Virgin Media, Tesco, O2, Microsoft, HP etc.

…the abrupt dismissal of dissenting voices,

its hysterical reaction to the notion of Scottish Independence…

http://www.medialens.org/index.php/alerts/alert-archive/2014/774-dark-omens-and-horror-shows-scottish-independence-power-and-propaganda.html
(I could post hundreds of other links on this topic!)

and the patronising smear campaign now being waged 24/7 against Jeremy Corbyn.

.
Since it has emerged that Jeremy is popular with the kind of ordinary people whose concerns are beneath the lofty machinations of the Guardian Media Group - their determination to rubbish the Corbyn campaign for leadership of The Labour Party and support his rivals has reached a farcical fever pitch.

and this is but a FRACTION of the smug patronising abuse that Corbyn and his supporters have been treated to over the last few days.

The intention is to create a climate of opinion in which any deviation from the terms and conditions The Guardian has placed on political debate remain unchallenged.

The Guardian has spent years defining the ‘centre ground’ so that it takes place within a neoliberal fantasy land, one which facilitates a cosy relationship with wealth and power.

The Guardian is a right wing newspaper now.

.
The few dissenting voices it allows space for are merely fig leaves for a right wing bias disguised as ‘balanced’ journalism.

The heavy lifting of foisting its fictional credibility onto the public is left to its churnalist live blogs, stories fed to them by PR agencies and political spin doctors , stories copied straight from the wire agencies like AP and worst of all, its tiresome clutch of factory hen hacks like Andrew Rawnsley & Martin Kettle <shudder>
.

and shall we mention its commitment to…

Homes for sale with Moorings? – one with a nice sloping lawn for £1.75 million?

Homes for sale with Tennis Courts? – a nice castle for £1.5 million?
to name but a few…

and best of all, just what has The Guardian done about Climate Change?

.
Eagle eyed readers might have already spotted that with The Guardian running full steam ahead on expensive consumerism, foreign travel and reviews of expensive new motors a position on climate change might prove difficult.

The Guardian could never put forward alternatives to consumerism, endless growth or advocate banking reform or strong state intervention, so instead they wrote to a billionaire friend (Bill Gates) and asked if he wouldn’t mind rearranging the investment portfolio of the Bill & Melinda Gates Foundation (and drop its shares in Shell etc)

Sadly Bill was not minded to listen to pious waffle from The Guardian on climate change and so that was pretty much the end of the campaign which has softly faded from view…
.

What can do we about this?

.
We can accept the truth – and this is very important – there is no liberal media in this country anymore, capital has bought it all.

Politicians will always gracefully accept what they cannot prevent – any change will have to come from grassroots activism supporting the concerns of ordinary people.

and we can tell The Guardian to fuck off – that we’re tired of being patronised, insulted, stereotyped and demeaned.

and we can ignore the panic of the corporate media and elect Jeremy Corbyn as leader of the Labour Party.

see also: “Stop coming up with popular policies,” say Corbyn rivals for Labour leadership. “people might vote for us!”

Why Jeremy Corbyn is terrifying the London elite
by Craig Murray 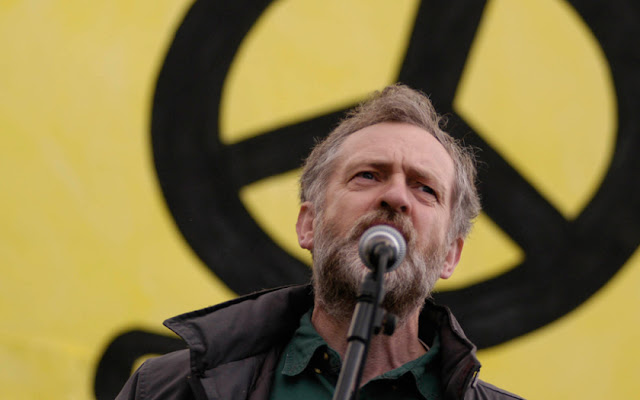 For a decade, I have argued that democracy in the UK is dysfunctional because an entrenched party system offers no real choice. The major parties offer political programmes which are virtually indistinguishable. As I put it in lectures, if the range of possible political programmes were placed on a linear scale from 1 to 100, the Labour and Conservative parties offer you the choice between 81 and 84.

This exclusion of political possibility is reinforced by a corporate media structure, led by the BBC, in which ideas outside the narrow band of establishment consensus are ridiculed and denigrated. Therefore even political ideas which have the consistent support of the majority of the population, such as nationalisation of railways and other natural monopolies including utilities, simply cannot get an airing. Of all the broadcast coverage of the Iraq War, less than 3% gave time to anti-war voices, despite a majority opinion against the war.

This phenomenon explains why a large majority of both Conservative and Labour MPs are members of the Friends of Israel when public opinion consistently sympathises more with Palestine. It also explains the quite extraordinary media onslaught against Scottish independence.

I pointed out that Nicola Sturgeon’s appearance in the TV leadership debates was the first major airing of an anti-Trident argument on broadcast media in England for a decade. Actually hearing anti-austerity arguments led to a huge surge in support for the SNP in England as well as Scotland.

Now Jeremy Corbyn, having obtained a platform where on occasion he has been able to have his views broadcast direct without media mediation, is experiencing a massive surge of support. Ed Miliband’s lasting achievement is that he managed to put the ordinary people who marched against the Iraq War in charge of the Labour Party, not the careerist Blairite committee manipulators. The result is stunning.

The sheer panic gripping the London elite now is hilarious to behold. Those on the favoured side of Britain’s enormous wealth gap are terrified by the idea that there may be a genuine electoral challenge to neo-liberalism, embodied in one of the main party structures. This is especially terrifying to those who became wealthy by hijacking the representation of the working class to the neo-liberal cause. The fundamental anti-democracy of the Blairites is plainly exposed, and the panic-driven hysterical hate-fest campaign against Corbyn by the Guardian would be unbelievable, if we hadn’t just seen exactly the same campaign by the same paper against the rejection of neo-liberalism in Scotland.

I think I am entitled to say I told you so. Many people appear shocked to have discovered the Guardian is so anti-left wing. I have been explaining this in detail for years. It is good to feel vindicated, and even better that the people I have repeatedly shared platforms with, like Jeremy and Mhairi, are suddenly able to have the genuinely popular case they make listened to. Do I feel a little left behind, personally? Probably, but I would claim to have contributed a little to the mood, and particularly my article on the manufactured myth that the left is unelectable has been extremely widely shared – by hundreds of thousands – in the social media storm that is propelling the Corbyn campaign.

There has been very little comment on the impact a Corbyn victory would have on the SNP. Indeed, despite being unbendingly unionist, the Scottish media have been unable to avoid representing by omission the fact that the Labour leadership contest is taking place almost entirely in another country with another political culture. But there is no doubt that a Corbyn-led Labour Party would be more attractive in Scotland than the Tory lite version, although the paucity of Labour’s Scottish leadership would be a constant factor. Much would depend on the wider question of how the careerists who make up most Labour MPs and MSPs would react to a Corbyn victory.

At Westminster, I can see no reason at all why Liz Kendall, Chuka Umunna and their like cannot simply cross the floor and become Tories. Cameron is astute enough to find junior ministerial positions for them and the Tory ranks would be elated enough to swallow it. But most of the careerists will look at their new constituency members and suddenly discover left wing principles. It will be less bloody than people expect.

In Scotland, a Corbyn victory will bring some swing back to Labour from the SNP, but most of the old Labour demographic have now set their hearts on independence. Should Corbyn actually look set to win a UK general election in 2020, that would very possibly dent the enthusiasm for independence at the margins. It would in no sense reduce my own desire for independence, but even I would feel it less urgent. A Corbyn led UK would not cause the same feeling of moral revulsion. All of which is a good argument for having the next referendum early.

Should Corbyn not win the Labour leadership, the effect will be opposite. The SNP will be boosted by the death of the last hope that the Labour Party might actually mean something again, rather than be a vehicle for soulless careerists spouting management-manual jargon. If Corbyn loses, the Labour Party in Scotland really might as well wind up. The cause of independence will be furthered.

So what do I want to happen? I want Jeremy to win, of course, deeply and sincerely. I am an internationalist and not a Machiavellian. I want the chance of a just society and an ethical foreign policy for England and Wales. Like me, Jeremy wants to see Ireland eventually united. I have never discussed Scottish independence with him, but I am quite sure his opposition is not of the Britnat imperialist variety.

You can be sure that the security services are heavily targeted on the Corbyn campaign. Allow me one last “I told you so”. I came in for much ridicule when I stated, from certain knowledge, that MI5 were targeted on Scottish Nationalists (I had actually been shown the tasking). This comes into the category of obvious truths which the media and political consensus seeks to deny. The ridicule even came from some within the SNP – which, like any other organisation deemed a threat to the UK, is itself penetrated by the security services. Well, now that truth has become mainstream too. I do not anticipate any apologies.