Chinese shares continue to all 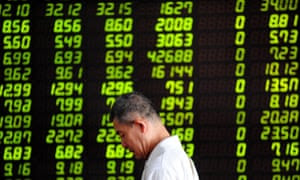 Chinese shares have had their worst month in six years, despite unprecedented steps by Beijing to stem the rout.

China’s securities watchdog said on Friday it is investigating the impact of automated trading on share markets, as authorities step up their clampdown on what they regard as speculative selling.

The CSI300 index was virtually unchanged on the day at 3816.7. After more than doubling over the past year, China’s stock markets started to slide in mid-June, and have slumped about 30%. But they are still up 13% so far this year.
Li Zheming, an analyst at Daton Securities, said:

Investors become especially sensitive towards the weekend when Beijing usually releases new messages, and that’s why they tend to square their positions on Friday.”