The slaughter of whales in the Faroe Islands

Shocking footage has emerged showing the slaughter of 250 pilot whales in the Faroe Islands. The annual event, known as the grindadráp, sees locals luring the animals to the shore before attacking them with lances and knives.

The brutal scenes were filmed by Sea Shepherd, a non-profit marine conservation society. Five members of the group were arrested while attempting to disrupt the bloody event that has been practiced for centuries.


The Faroe Islands form an archipelago lying between the Norwegian Sea and the North Atlantic Ocean, some 320km northwest of Great Britain. The self-governing islands are an autonomous region within the Danish kingdom, financially dependent on Copenhagen in areas such as military defense, police, justice, currency and foreign affairs.

The slaughter has shocked the world, with a hashtag #BoycottDenmark created on Twitter for people to voice their indignation.

According to the MarineBio Conservation Society, pilot whale population numbers are unknown, but they are “not considered endangered.” The animals have been hunted for their meat, bone, oil, and for fertilizer. Pilot whale meat is among the key products bought and sold by the locals in the north Atlantic islands. Although whaling is illegal in the EU, Denmark has moved to protect this traditional event in the remote Faroe Islands.

whale slaughter in the faroe islands? this is disgusting, humans are the worst living creatures on this planetpic.twitter.com/X5BCQXHbWo

Every year, an average of 800 pilot whales are routinely driven ashore and slaughtered for their meat and blubber in the Faroe Islands, according to Campaign Whale, a non-profit organization set up to protect whales, dolphins, porpoises and their habitats.
Sea Shepherd activists reported on Friday afternoon that “a massive pod of around 150 pilot whales was spotted close to the Mykines in the west of the Faroe Islands archipelago. A flotilla of small boats drove the pod to Bøur. The awaiting crowds of killers then dragged the animals violently on to the killing beach."

The group said the second grindadráp took place at Nólsoyarfirði, west of the capital of Tórshavn. “Reports indicate that approximately 50 pilot whales were herded from Nólsoy onto the killing beach at Tórshavn by 40 boats, and eventually slaughtered.”

Why #BoycottDenmark? Their 'dependency' the #FaroeIslands continues a barbaric tradition of whale massacres! pic.twitter.com/O6Oh5EauBo

Sea Shepherd added: “How Denmark - an anti-whaling member nation of the European Union, subject to laws prohibiting the slaughter of cetaceans – can attempt to justify its collaboration in this slaughter is incomprehensible.”

.@GoVisitDenmark Do u think people want to visit 2 see this? Think again. You are guilty.#OpGrindini#boycottdenmarkpic.twitter.com/NZJMX6dnXV

Whale meat was once considered a valuable source of food for the Faroese.
According to PubMed, studies dating back to 1977 have shown an increase in contamination of the meat, blubber, liver and kidneys of pilot whales. Mercury from pilot whale meat is said to affect the foetal development of the nervous system. Contaminants in the blubber adversely affect the immune system so that children react worse to immunizations. These contaminants also appear to increase the risk of developing Parkinson's disease in those who habitually eat pilot whale.

“From the latest research results, the authors consider that the conclusion from a human health perspective must be to recommend that pilot whale is no longer used for human consumption,” researchers state. 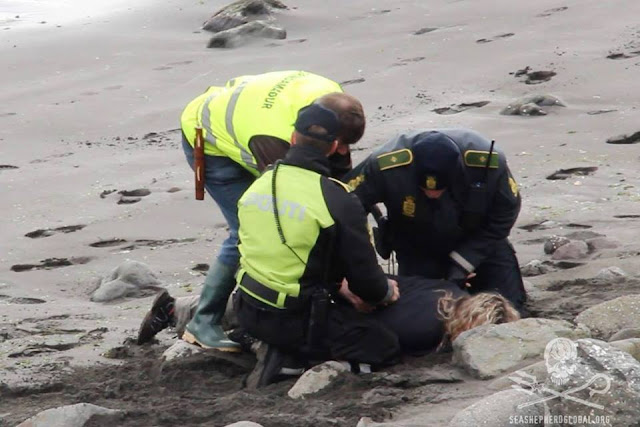 It took three Faroese policemen to tackle and stop one South African woman from trying to stop the brutal murder of a pod of pilot whales. All of us in SeaShepherd around the planet salute you Rosie Kunneke - Sea Shepherd Land Team Leader for Sea Shepherd in the Faroe Islands

The Grind: Whaling in the Faroe Islands (Full Length)


There’s not much agriculture in the Faroe Islands, an archipelago in the North Atlantic, roughly equidistant from Norway, Iceland, and Scotland. Aside from the sheep that freely roam the fjords and a few root vegetables, the Faroese have always relied on the surrounding sea as a source of fish, seabirds, and the pilot whales they slaughter in a hunt known as the grindadráp, or grind.

"Grind,” which rhymes with wind, is Faroese for pilot whale, and can refer to the event of the whale slaughter, the whale meat, or the whales themselves. Hunting whales for food is a tradition as old as the islands have been inhabited. But in the past few decades, animal activists have taken issue with the grind, despite Faroese insistence that it is sustainable and humane.

Motherboard visited the Faroe Islands to see a grind first hand as the Faroese defend
Posted by seemorerocks at 15:49