Obama pledged to reduce nuclear arsenal, then came this weapon 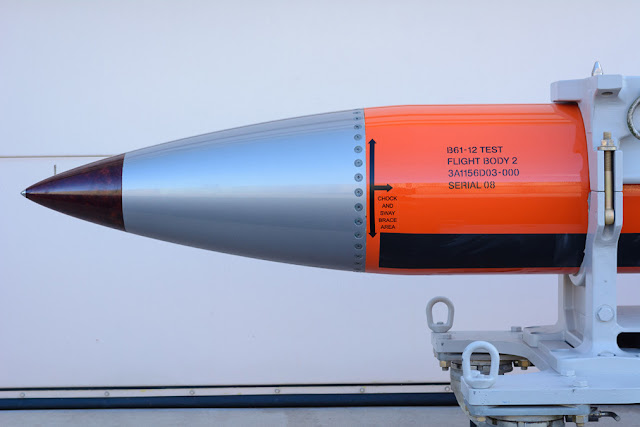 ALBUQUERQUE, N.M. – Standing next to a 12-foot nuclear bomb that looks more like a trim missile than a weapon of mass destruction, engineer Phil Hoover exudes pride. “I feel a real sense of accomplishment,” he said.

But as Hoover knows, looks can be deceiving. He and fellow engineers at Sandia National Laboratories have spent the past few years designing, building and testing the top-secret electronic and mechanical innards of the sophisticated B61-12. Phil Hoover, an engineer at Sandia National Laboratories, shows off a flight test body for a B61-12 nuclear weapon. Sandia engineers have spent the past few years designing, building and testing the top-secret electronic and mechanical innards of the bomb.Credit: Jerry Redfern for Reveal

Later, when nuclear explosives are added at the federal Pantex Plant near Amarillo, Texas, the bomb will have a maximum explosive force equivalent to 50,000 tons of TNT – more than three times more powerful than the U.S. atomic bomb dropped on Hiroshima, Japan, 70 years ago this August that killed more than 130,000 people.

The U.S. government doesn’t consider the B61-12 to be new – simply an upgrade of an existing weapon. But some contend that it is far more than that.

Hans Kristensen, a nuclear weapons expert at the nonpartisan Federation of American Scientists in Washington, is resolute that the bomb violates a 2010 Obama administration pledge not to produce nuclear weapons with new military capabilities.

“We do not have a nuclear guided bomb in our arsenal today,” Kristensen said. “It is a new weapon.”

Kristensen’s organization was formed in 1945 by nuclear scientists who wanted to prevent nuclear war. And it’s not the maximum force of the B61-12 that worries him the most on that front.

Instead, he says he fears that the bomb’s greater accuracy, coupled with the way its explosive force can be reduced electronically through a dial-a-yield system accessed by a hatch on the bomb’s body, increases the risk that a president might consider it tame enough for a future conflict.

Congress shared similar concerns in rejecting other so-called low-intensity nuclear weapons in the past. But most of the national criticism of this bomb has focused on its price tag. After it goes into full production in 2020, taxpayers will have spent about $11 billion to build 400 B61-12 bombs. That sum is more than double the original estimate, making it the most expensive nuclear bomb ever.

To Kristensen and others, if President Barack Obama’s pledge was serious, the bomb shouldn’t exist at any price.

How the B61-12 entered the U.S. arsenal of weapons is a tale of the extraordinary influence of the “nuclear enterprise,” as the nuclear weapons complex has rebranded itself in recent years. Its story lies at the heart of the national debate over the ongoing modernization of America’s nuclear weapons, a program projected to cost $348 billion over the next decade.

This enterprise encompasses defense contractors, including the subsidiary of Lockheed Martin Corp. that runs the Sandia labs for the government, as well as the U.S. Department of Energy and the nuclear weapons-oriented wings of the U.S. military – particularly the Air Force and Navy. With abundant jobs and dollars at stake, the nuclear enterprise is backed by politicians of all sьripes.

That relationship begins with money.

Since 1998, these four contractors have contributed more than $20 million to congressional campaigns around the nation. Last year alone, they spent almost $18 million lobbying Washington to ensure that funding for nuclear weapons projects continues even as nuclear stockpiles shrink.

Sheila Krumholz, executive director of the Center for Responsive Politics, said the outlay is a bargain considering what’s at stake for the contractors.

“It’s an insignificant cost of doing business relative to the potential income from these contracts,” she said.

In arid, impoverished New Mexico, the nuclear weapons enterprise thrives on particularly close connections between business interests and politicians, doors revolving in both directions and successful efforts to minimize oversight of corporate behavior.