The US to bomb Alaska 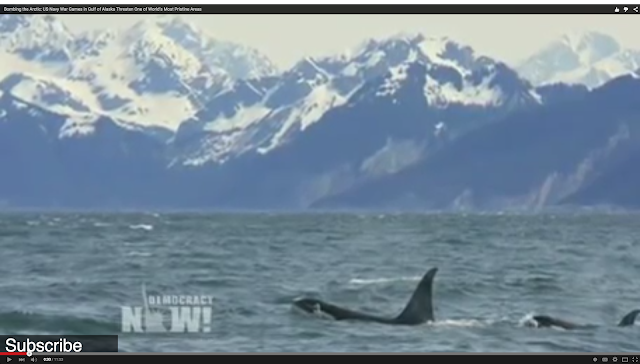 Bombing the Arctic: US Navy War Games in Gulf of Alaska Threaten One of World’s Most Pristine Areas

The U.S. Navy is set to begin a major war exercise in the Gulf of Alaska amid protests from local communities concerned about environmental damage.

The Navy is reportedly unleashing thousands of sailors, soldiers, airmen, marines and Coast Guard members along with several Navy destroyers, hundreds of aircrafts, untold weaponry and a submarine for the naval exercises.

The Gulf of Alaska is one of the most pristine places left on Earth; the region includes critical habitat for all five wild Alaskan salmon species and 377 other species of marine life. T

he Navy’s planned live bombing runs will entail the detonation of tens of thousands of pounds of toxic munitions, as well as the use of active sonar in fisheries.

The Navy has conducted war games in the Gulf of Alaska, on and off, for the last 30 years, but these new exercises are the largest by far. They come at a time when scientists are increasingly worried about climate change causing Arctic melting.

Meanwhile, the unprecedented melting has created an opportunity for the military to expand its operations into previously inaccessible terrain.

We are joined by Dahr Jamail, staff reporter at Truthout, whose latest piece is "Destroying What Remains: How the US Navy Plans to War Game the Arctic."

Posted by seemorerocks at 11:16