Wanganui residents are waking up to the city's biggest flood in recorded history.
About 200 people have been evacuated from 100 properties while a large number of residents have also self evacuated. A state of emergency was declared in Wanganui late yesterday afternoon with Taranaki and Rangitikei following.
The Whanganui River spilled over into the city overnight and breached stop banks along Anzac Parade. 
Horizons Regional Council recorded the Whanganui River reaching a peak of 9.1 metres at Town Bridge at 3am, with a flow rate of 4,690 cubic metres per second.
This morning water covered Taupo Quay and up to the lower part of Victoria Ave and parallel streets. CBD streets were blocked at Ridgeway St from Market Pl.
Members of the public have been coming in town to observe the damage but have been turned away from the water's edge and extra cordon tape has been put up. 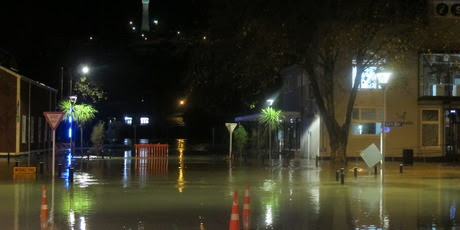 Last night's flooding in Wanganui was the worst on record. PHOTO/ ZARYD WILSON

Horizons incident controller Michael McCartney says it has been a challenging night in Wanganui as flood levels exceeded the flood protection standards for parts of Wanganui.
"Surface flooding is expected to recede as river levels drop. Thankfully the weather forecast is looking up but we're aware as people return to their properties there is going to be a big clean-up to face," Mr McCartney said.

Many properties will not be able to be accessed until Monday at the earliest and it is more likely to be Tuesday before people can return to their properties as they will need to be cleaned and limed due to sewage contamination.
Evacuated areas will continue to be cordoned off and the cordons will be manned.
In addition, Police mobile patrols are on duty throughout the community.
The Whanganui River level seems to have stabilised and no significant increase in flooding is expected. However, it is likely to take all day Sunday for the roads to clear of floodwater. 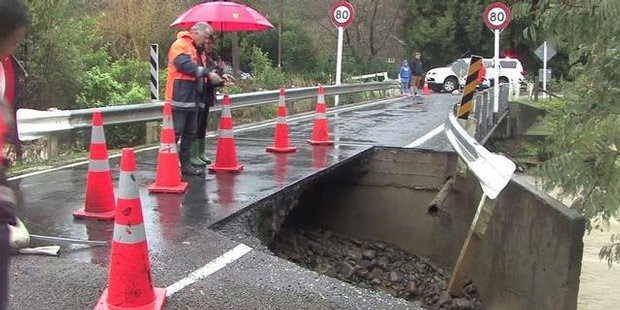 This morning Merservice lifted the heavy rain warnings for the central and lower North Island.
Social media pages have been set up coordinate clean up and volunteering efforts.

The Dublin Street Bridge is open to emergency services only.
The City Bridge is closed until a structural assessment can be done. 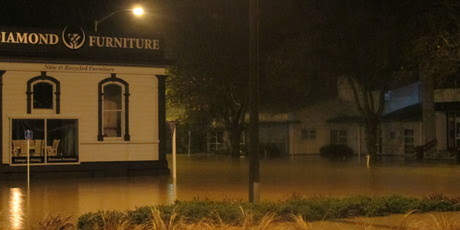 Last night's flooding in Wanganui was the worst on record. PHOTO/ ZARYD WILSON


Whanganui Police are asking people not to try to travel south on State Highway 3. They will not be allowed through the cordons except in a real emergency.
Residents are asked to conserve water and to treat all flood waters as contaminated.
Wanganui District Council are holding a media briefing at 9am.

The Whanganui River at my place , higher than I have ever seen it!pic.twitter.com/5fzKwzSTgn

Rangitikei has also been hit hard by flooding with rural fire crews and the Army last night preparing to evacuate the isolated village of Koitiata.
Rangitikei District Council and Civil Defence staff are now assessing affected properties in Marton. Council is checking water and wastewater systems and the roading network across the district.
More to come.

Have seen a bit of the flooding damage in the #Tuteanui and#Marton area. Bit of a mess! Still #raining!!pic.twitter.com/KfgiSUElkX 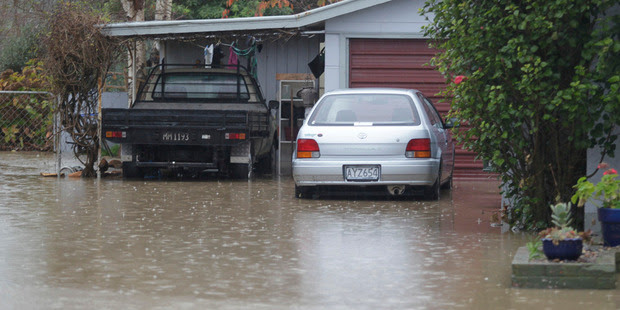 The authorities have described the flooding in Wanganui as the largest flood event in the district's recent history. 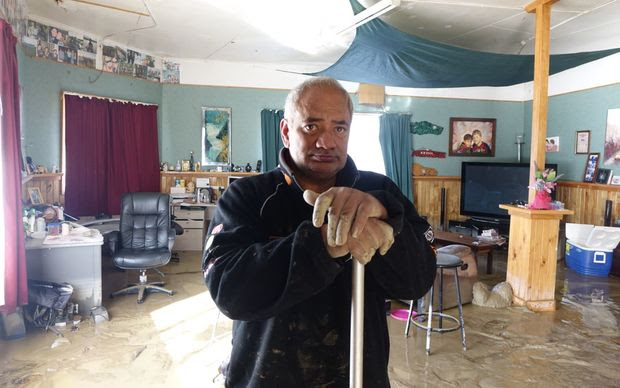 Civil defence said 100 properties in Wanganui were evacuated overnight, with many choosing to leave their homes as the water rose.

A state of emergency remains in place for Wanganui, Rangitikei and the Taranaki district.

About 200 people were forced to leave their properties as the Whanganui River spilled over its stopbanks early this morning after more than 24 hours of heavy rain.

Dozens of homes on the eastern side of the river have been inundated by floodwaters with the Anzac Road and Putiki areas the worst affected.

Businesses along Taupo Quay in the central business district have also been flooded and the main bridge into the town is closed because it has been hit by logs and will need an engineering assessment this morning.

Wanganui Civil Defence controller Kevin Ross said it is an 85 year flood and more rain is on the way today and tomorrow. 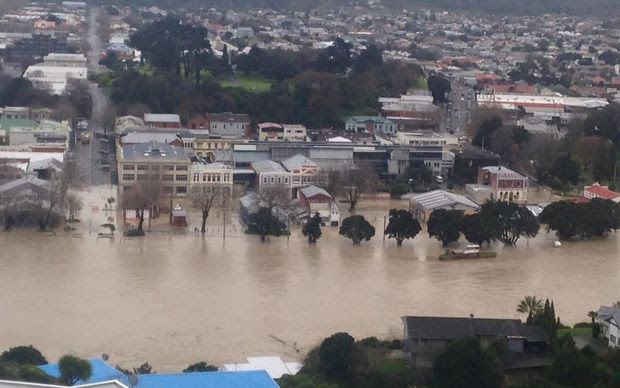 An image of Wanganui taken by a resident.   Photo: Diana Fowler

He said the city remained cut off because of the closure of State Highway 3.
Civil defence public information manager Sue Dudman said the situation was dangerous and residents in the Wanganui and Rangitikei districts were being urged to stay at home this morning.

"We really need people to keep away from the affected areas, there's a lot of water, it's dangerous, the water is contaminated, so please just stay home, don't go stickybeaking."

Sue Dudman said it was still not known how badly affected many rural areas are because local roads and highways remain closed, along with Wanganui's main bridge across the river.

Meanwhile, civil defence said there may be further evacuations needed around Whangaehu on State Highway 3 due to the high level of the Whangaehu River.

Many people evacuated from their flooded properties will not be able to return to their homes before tomorrow at the earliest because of fears over sewage contamination. 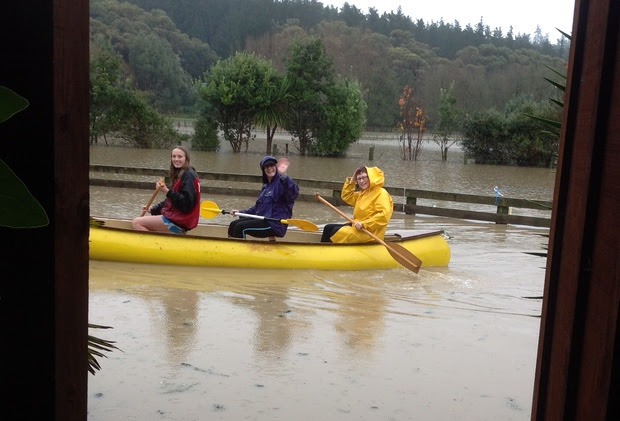 The river level has now stabilised and no significant increase in flooding is expected, although more rain is forecast for today and tomorrow.

The city's Civil Defence controller Kevin Ross said it was likely to take all day for the roads to be clear of floodwater.

Kevin Ross said a helicopter will assess the state of the rural roads around Wanganui. 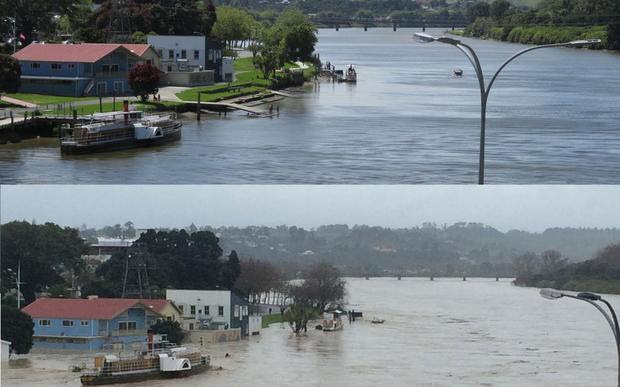 The image below shows the level of the Whanganui River this morning, in contrast to a normal day.   Photo: Twitter / @adzebill

Army unimogs evacuated six people from the township of Koitiata, in Rangitikei.
Koitiata resident Suzi Bryant said the army evacuated people who wanted to leave but most wanted to stay with their homes.

She said some of the town's 60 or so houses are badly flooded - and some owners will have lost everything.

Suzi Bryant said the roads in and out of the town are closed so the residents are isolated.

Civil Defence in South Taranaki said a state of emergency will remain in place in the flooded settlement of Waitotara.

The entire village of about 60 homes and a pub full of people were evacuated late last night after a state of emergency was declared when heavy rain swelled the Waitotara River to dangerous levels.

The river peaked at midnight with the high tide.

While authorities said the threat of serious flooding in Waitotara had passed, they had major concerns about the stability of the bridge crossing into the town.

Taranaki's Civil Defence Controller Sue Kelly said the river level was starting to drop but the Waitotara Bridge had been hit by heavy debris and is creaking and groaning under the strain.

She said engineers will be out this morning to inspect it and until then residents will not be able to return to their homes.

The Transport Agency said some of the lower North Island's main roads will be closed for several days.

Flooding and slips have blocked State Highway Three between Wanganui and Turakina and at Kaitoke.

The agency's regional performance manager for Wellington Mark Owen said the Gorge will also stay closed for several days while the slips there are assessed.

"Our roads are fairly decimated so we are pushing from the centre of town out, breaking through where the slips are so we can assess the rural area and beyond and trying to keep emergency services able to access the east side of Wanganui."
Stuart Hylton said reports from