The Sixth Extinction on the Pacific West Coast 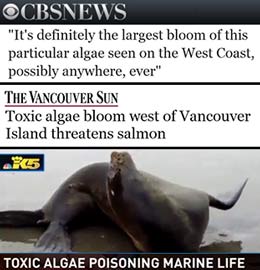 CBS, Jun 17, 2015 (emphasis added): A toxic algae bloom spreading off the Pacific coast could be the largest one scientists have ever seen. “It’s definitely the largest bloom of this particular algae seen on the West Coast, possibly anywhere, ever” Raphael Kudela, a professor of ocean sciences at the University of California Santa Cruz, told CBS News… “Currently what we’re seeing is this large bloom taking place from about Santa Barbara all the way up to Alaska,” said Kudela… “We’ve been keeping track since the beginning of May.”… But the size of this bloom surprised even him. “It’s over such a large area. You typically don’t see these blooms up in Alaska. They’re having to deal with something they’re not used to dealing with.”…Already, animal rescue centers along the coast are seeing an unusual increase in sea lion, dolphin and pelican deaths…

Vancouver Sun, Jun 22, 2015: Toxic algae bloom west of Vancouver Island threatens salmon… The bloom stretches along the Pacific coast from California to B.C… the cause is unknown… An additional concern relates to salmon stock. The bloom has almost no crustaceans… which is worrisome, [Ian Perry, a research scientist with Fisheries and Oceans Canada] said… “with the lack of crill [sic] and other crustaceans, there is a concern they won’t find as much food”… consequences could be seen in lower salmon stocks returning to rivers in two to four years, he said.

Daily Breeze, Jun 20, 2015: The West Coast is in the midst of the most prolific toxic algal outbreak ever recorded, said Vera Trainer, manager of the Marine Biotoxin Program at NOAA… What makes it even more unusual is that other debilitating toxins have been found alongside it — in some cases infecting the same animals…

Spokesman Review, Jun 17, 2015: A toxic algae bloom that’s unprecedented is range is affecting marine life from Central California toward Alaska… Now, its effects are spreading to mammals. In recent video… a sea lion is shown having seizures. NOAA researchers say they have never seen this before on… Washington’s coast.

KING 5 Seattle transcript, June 17, 2015: Washington scientists are conducting an emergency survey of an unprecedented toxic algae bloom in the Pacific, the bloom is so big it extends from Southern California to Alaska… It’s affecting marine life in ways never seen before… (Dr. Vera Trainer, manager of NOAA’s Marine Biotoxin Program): “A sea lion with his head arched back and bobbing, he’s basically having seizures… We’re seeing effects on the marine ecosystem that we haven’t seen before.”… Now it’s effects are spreading to mammals.
(Trainer): “I think it’s scary, when we start seeing marine mammals suffering from these toxins, they’re not that far in the food chain from us.”…  It’s the first recorded in Washington to react like this. And researchers know it won’t the last. (Trainer): “This is just one animal that was found on the beach. You wonder what other animals that are not on the beaches — what’s happening to them?”

Dr. Vera Trainer, NOAA: “All the signs are pointing to this being a really unusual event that is very widespread… It really seems like this algal bloom is lurking offshore, not getting dissipated by storms and weather… So it looks like it will stay like this. But it’s still too early to say that it’s linked to warm water… I wouldn’t be surprised if this has influence over our entire coastline, with varying intensity at different parts.”