Though there has still be no agreement, it seems that we are again looking at something like the situation that we saw in February.

Briefly, Tsipras talks about "red lines", makes brave speeches in the Greek parliament about the creditors "pillaging Greece", flirts with Moscow - and then backs down.

No doubt as we saw after the last climbdown in February a host of economists and commentators sympathetic to Tsipras and Syriza are going to tell us that there was no climbdown and that Tsipras has not crossed his "red lines" - saying so on the basis of various technical points in the proposals.

I am afraid based on reports I am reading there is no doubt he has. He said - or gave the impression - that further pension cuts were out of the question. He is now offering cuts in pension entitlements amounting to 0.4% of GDP this year and 1% of GDP next year. However you spin it, that is a clear crossing of what he gave people in Greece to think were his immoveable "red lines"

Whilst this is less than what the IMF-EU were demanding, it is not significantly so and again, as was the case last February, I can't but think that more conciliatory diplomacy would have achieved the same result without all the anger and trouble.

I am starting to think that this is going to be the recurring pattern with Tsipras. He knows how to talk the talk, but he can't bring himself to walk the walk.

Ultimately he is not prepared to face a Grexit, which means the IMF-EU have him over a barrel.

There is predictably some mumbled talk from Merkel that in return for backing down Tsipras might get at some unspecified future time the promise of a possible debt write-off. With Schauble and most of the other Eurozone finance ministers implacably opposed to the idea, I wouldn't count on it. As it happens the same promise was made before to Samaras and it was never honoured. Besides how big would such a write-off be?

If it is merely a token amount then it is not worth having.
It would be wrong to say that I welcome a Grexit. I am fully conscious of the appalling effects at least in the short term.

However a Grexit would at least offer some hope of an end to this never-ending drama. It looks like my hopes that we might at last be there were premature. Assuming - as must now be likely - that some sort of deal is done in the next few days to tide Greece over the next few months, it looks like we must all prepare ourselves for the next instalment of this ghastly farce some time in the autumn. 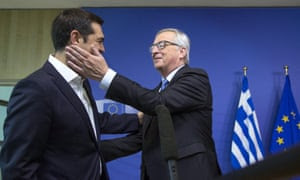 We’ve long said that negotiations between Greece and its creditors are more a matter of politics than they are a matter of economics or finance.

From the troika’s perspective, breaking Greece and forcing PM Alexis Tsipras to concede to pension cuts and a VAT hike is paramount, and not necessarily because anyone believes these measures will put the perpetually indebted periphery country on a sustainable fiscal path, but because of the message such concessions would send to Syriza sympathizers in Spain and Portugal. In short, the troika cannot set a precedent of allowing debtor nations to obtain austerity concessions by threatening to expose the euro as dissoluble.

On the Greek side of the table, Tsipras must convince Syriza party hardliners that concessions are preferable to Grexit and the economic malaise that would come with redenomination. For some on the Left Platform, compromising the party’s electoral mandate is simply not an option and it’s these lawmakers (who just two weeks ago voted to leave the euro and default) that Tsipras will need to sway or else attempt to push an unpopular agreement through parliament a gambit which implicitly assumes that the ensuing political upheaval and voter backlash is preferable to economic collapse. The problem with the latter approach is that it effectively means the troika will have succeeded in using financial leverage to subvert the democratic process, an eventuality that die hard Syriza hardliners are in no mood to suffer.

After one final attempt to table a proposal that retains some semblance of Tsipras' defiant posturing, it appears he may have finally broken after a meeting with ECB chief Mario Draghi where is sounds as though the central bank warned the PM that without concessions, ELA to Greek banks would be cut off and that, of course, would mean game over as Greeks would take to the streets en masse.
From Bloomberg:

European Central Bank President Mario Draghi told Greek Prime Minister Alexis Tsipras in meeting on Monday in Brussels that the ECB will help secure the country’s banking system as long Greece is in an aid program, Greek government official tells reporters on the condition of anonymity.

And shortly thereafter (via AFP):

Greece has accepted the principle of extending its current bailout programme which expires at the end of the month so as to keep it afloat while a long-term debt solution is worked out, Greek government sources said Monday.

"For the first time, we accept the extension of the programme as the only way forward," one source said as eurozone leaders discussed Greece's future in the single currency ahead of the June 30 end of its current aid programme.
And so, we turn to politics or, more appropriately, Greek politics because the fate of Greece now looks to rest in the hands of Syriza's far left factions. Dow Jones has more:

To avert a default and possible exit from the eurozone, Greek Prime Minister Alexis Tsipras must sell Germany's chancellor, Angela Merkel, on his plan to fix Greece's finances.

Then he needs to persuade Vassilis Chatzilamprou.

But out at the Resistance Festival, an annual gathering of Greece's far left, the lawmaker from Mr. Tsipras's left- wing Syriza party said he was in no mood for submission.

"We cannot accept strict, recessionary measures," Mr. Chatzilamprou warned. It was after midnight Sunday, and the weekend festival was winding down. "People have now reached their limits."

Syriza isn't a traditional party but a coalition of left-wing groups with an intricate family tree formed out of doctrinal splinters and squabbles. It is those many, disparate factions that Mr. Tsipras must also satisfy with any potential bailout agreement with Greece's creditors.

That unusual composition has made it especially hard for Mr. Tspiras to strike a deal with eurozone and International Monetary Fund officials. "The people who are responsible for the negotiation move within a frame that is determined by the central committee of the party," says Alekos Kalyvis, a longtime union official who is on the committee and responsible for its economic-policy portfolio.

The negotiators have some latitude to make decisions, he said, "but this shouldn't be interpreted as if they have a blank check from the party--neither them nor Tspiras."

Many of Syriza's factions regard the party's rise as a epochal moment for the left--and any compromise on a bailout as a deep betrayal of its principles.

Stathis Leoutsakos, another Syriza member of Parliament, said Germany and the other creditor countries are determined to defeat Syriza. "In my opinion, their aim is to humiliate the Greek government," he says. "They want the message that no other politics are accepted in the eurozone."

It is also uncertain exactly what kind of deal would be acceptable to the left wing of Syriza. The party's argument that fiscal austerity--steep budget cuts and tax increases--has deepened Greece's economic slump has been central to its popular success.

Most on the party's left wing reject any additional pension and wage cuts outright, saying Greek workers have suffered enough in years of depression since Greece's first bailout.

Mr. Leoutsakos, like others on the far left, also insist that at least some of Greece's debt must be forgiven. "In order to service it, we'd need to execute the Greek people," he said. "And nobody in Syriza is willing to do it."

There is also the question of Mr. Tsipras's future as prime minister if he does compromise. No one here is unaware of the fates of former Greek premiers George Papandreou and Antonis Samaras. Both signed bailout agreements with Europe.

Both lost their jobs, and Mr. Papandreou's party has been all but destroyed.

Going back on his leftist principals "would be political suicide for Tsipras," Mr. Chatzilamprou said. "It would mean he is also recyclable: They could replace him with someone else."

And DB has more color on the political fight Tsipras faces in the coming weeks:
Subject to further progress this week, focus is likely to shift very quickly to the Greek domestic political front. Disbursements for Greece ahead of the IMF tranche due at the end of the month will require domestic parliamentary approval. It is likely that the Greek PM would first attempt to obtain approval from the SYRIZA party's 200-strong Central Committee before bringing an agreement to parliament. In the event of failure at the party level, a referendum would likely be called. In the event of party approval, a vote would be likely taken to the parliamentary floor. Depending on the process adopted, such a vote may take between 2 days to a week.

It will remain a major challenge for the Greek PM to successfully pass a potential agreement through parliament. Local press reports that 10-40 SYRIZA MPs are likely to dissent (the government has an 11 MP majority), while overnight the Independent Greeks junior coalition partner (12 MPs) has also raised the possibility of withdrawing from government. How the political process plays out largely depends on the number of MPs the current government loses. A loss of less than thirty parliamentarians may force a change in coalition to include the two small moderate parties in parliament (PASOK and the River) jointly controlling 30 MPs. More substantial losses requiring the support of major opposition party New Democracy would open up the possibility of broader changes to the government or a referendum.

We'll close with what we said last week about the tough choice the PM faces: "Tsipras must decide how he wants history to remember his tenure as Prime Minister. Either he will be the leader who allowed Greece to crash out of the euro on its way to a redomination-driven economic collapse, or he will go down as the fiery advocate for change who caved under pressure and allowed the troika to stamp out democracy in the place where it was born."
*  *  *
And because this is Europe after all, someone had to deny the "rumors":

Thousands rally in Athens amid summit to avert ‘uncontrollable Grexident’

Thousands have gathered in front of the Greek Parliament in support of Athens’s place in the eurozone, calling for a debt agreement to be reached as EU leaders and international creditors race against time to avert the country’s looming default.
Posted by seemorerocks at 13:51