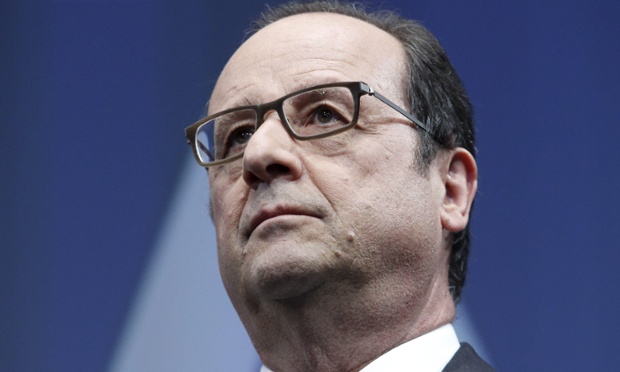 The French president, François Hollande, has called an emergency meeting of his country’s defence council for Wednesday morning after claims that American agents spied on three successive French presidents between 2006 and 2012. According to WikiLeaks documents published late on Tuesday, even the French leaders’ mobile phone conversations were listened to and recorded.

The leaked US documents, marked “top secret”, were based on phone taps and filed in an NSA document labelled “Espionnage Elysée” (Elysée Spy), according to the newspaper Libération and investigative news website Mediapart. The US was listening to the conversations of centre-right president Jacques Chirac, his successor Nicolas Sarkozy, and the current French leader, Socialist François Hollande, elected in 2012.

The recorded conversations, which were handled by the summary services unit at the NSA, were said to reveal few state secrets but show clear evidence of the extent of American spying on countries considered allies. WikiLeaks documents suggest that other US spy targets included French cabinet ministers and the French ambassador to the United States.

“The documents contain the ‘selectors’ from the target list, detailing the cell phone numbers of numerous officials in the Elysée up to and including the direct cell phone of the president,” a report of the taps published in the French media revealed.

According to the documents released by Wikileaks, Sarkozy is said to have considered restarting the Israeli-Palestinian peace talks without US involvement. They also purport to show that Hollande feared a Greek euro zone exit as far back back as 2012.

The documents are said to include summaries of conversations between French government officials on the global financial crisis, the future of the European Union, the relationship between Hollande’s administration and Merkel’s government, French efforts to determine the make-up of the executive staff of the United Nations, and a dispute between the French and US governments over the latter spying on France.

In 2012, just days after Hollande took office, according to the Wikileaks documents, he “approved holding secret meetings in Paris to discuss the eurozone crisis, particularly the consequences of a Greek exit from the eurozone”.

The files say Hollande believed German chancellor Angela Merkel “had given up [on Greece] and was unwilling to budge”.

“This made Hollande very worried for Greece and the Greek people, who might react by voting for an extremist party,” the document alleges.
The revelations come as France gives its domestic intelligence and surveillance services controversial greater powers to combat jihadist networks, with more permissions to bug phones and licences to carry out mass surveillance on the internet.

In an article co-authored by Julian Assange, the French newspaper Libération pointed out that in matters of spying, there are no friends: “Spying abroad is the ultimate ‘grey zone’ in surveillance – it is also, in France, the real blind spot of the planned law on surveillance, expected to be adopted this Wednesday.”

Mediapart said: “For almost 10 years, the United States has listened into French presidents … it was all classed top secret or ‘special intelligence’.

“In the five documents that we are publishing, four were marked with a G, kept for the most ‘highly sensitive material’, others were labelled ‘NF’, stipulating that they must not be communicated to foreign countries in any circumstances. Most were marked ‘unconventional’, meaning they had been got through hacking.”

The documents published by Mediapart suggest that the Americans were tapping into François Hollande’s conversations from the moment he was elected in 2012.

Ned Price, spokesperson for the US National Security Council, said on Tuesday in remarks that were grounded in the present and future tense: “We are not targeting and will not target the communications of President Hollande … we work closely with France on all matters of international concern, and the French are indispensable partners.”

On the historical allegations, Price said: “We are not going to comment on specific intelligence allegations. As a general matter we do not conduct any foreign intelligence surveillance activities unless there is a specific and national security purpose. This applies to ordinary citizens and world leaders like.”

The Elysée has not commented on the revelations except to say it is looking at the leaks to see “what is involved”.

Hollande’s Socialist party issued a statement saying the reports suggested “a truly stupefying state paranoia”. Even if the government had been aware of such intercepts, the party said, it would not mean “that this massive, systematic, uncontrolled eavesdropping is toгerable”.

Sources close to Sarkozy told journalists the spying was “unacceptable as a general rule and even more so among allies”.

Michele Alliot-Marie, a former defence and foreign affairs minister under Chirac and Sarkozy, told the iTele channel that France had long known the US had the technical means to try to intercept conversations.

“We are not naive: the conversations that took place between the defence ministry and the president did not happen on the telephone,” she said.
“That being said, it does raise the problem of the relationship of trust between allies.”