Putin Unexpectedly Calls Obama: What Did They Talk About? 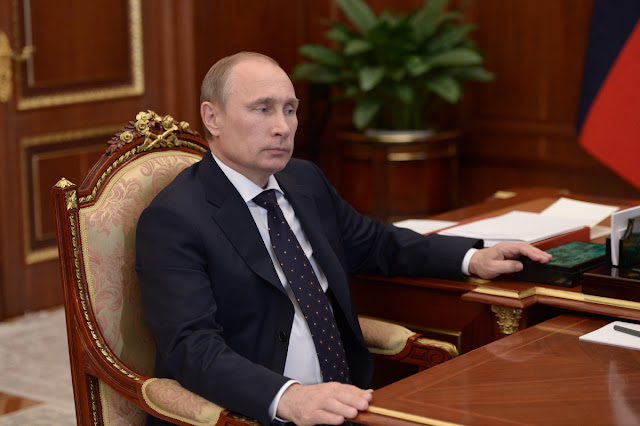 Nearly a year since the last phone call between Obama and Putin, most of which happened at the request of the US president to provide sound-ops for the US media as part of the US "pacifist" intervention in the Ukraine civil war instigated by the US State Department, earlier today in an unexpected development, it was Putin who made an impromptu phone call to Obama.


Vladimir Putin had a telephone conversation with President of the United States of America Barack Obama.

In particular, the two leaders discussed the Ukrainian crisis and the fulfilment of the Minsk Agreements. The Presidents agreed that US Assistant Secretary of State Victoria Nuland and Russian Deputy Foreign Minister Grigory Karasin will be in contact to discuss implementation of these agreements.

Significant attention was given during the discussion to a set of issues pertaining to fighting terrorism, particularly the spread of influence by the “Islamic State” group in the Middle East. Vladimir Putin and Barack Obama agreed to instruct Russian Foreign Minister Sergei Lavrov and US Secretary of State John Kerry to hold a meeting to discuss this issue.

In addition, the presidents of Russia and the US had an extensive discussion of current issues in bilateral relations. They also engaged in a detailed exchange of opinions concerning the situation in Syria and touched on settling the issue of the Iranian nuclear programme.

So why really did Putin call Obama?

The underlying reason may well have to do with what we discussed three weeks ago in "The Noose Around Syria's Assad Tightens" a post which we left off with two rhetorical questions: i) what is the maximum pain level for Russia, which has the greatest vested in interest in preserving the Assad regime in place, and when does Putin finally get involved, and ii) how.

Perhaps Putin gave an answer on i) or ii), or both, to Obama in the phone all.

Curiously, speaking of US support for ISIS as a front to topple Assad, just a few hours before Putin's phone call, the WSJ reported an even more outlandish conspiracy theory:

In a tent city under a highway overpass in Baghdad, refugees from Iraq’s Sunni province of Anbar were unanimous about whom to blame for their misery

“I hold Americans responsible for destroying Anbar,” said former policeman Wassem Khaled, whose home was taken over by Islamic State, or ISIS, after the Iraqi army fled from Anbar’s provincial capital of Ramadi last month.

“We all know that America is providing ISIS with weapons and food, and that it is because of American backing that they have become so strong,” added Abbas Hashem, a 50-year-old who also escaped from Ramadi and now lives in the makeshift Baghdad camp that is only occasionally supplied with water.

Such conspiracy theories about America’s support for Islamic State are outlandish, no doubt. But they are so widespread that they now represent a political reality with real-world consequences—making it harder for the U.S. and allies to cobble together Iraqi forces that could regain the country’s Sunni heartland from Islamic State’s murderous rule one day.


Outlandish, sure. But when is the last time the US supported a local murderous insurgency just to achieve some ulterior regime-change model. We ask, of course, rhetorically.

So with that in mind, could the real conversation between Putin and Obama have been a simple quid-pro-quo of the sort: you let us keep Assad, and we won't bail out Greece jointly with China and plant a Russian naval base in Piraeus, right next to the brand new Chinese military base, smack in the middle of a NATO country, leading to the biggest diplomatic headache for a US administration since deciding how to pass of a vial full of innocuous white powder as a weapon of mass destruction and a pretext to invade Iraq in the middle of the UN assembly.