Paul Craig Roberts expresses what some of us were perhaps feeling in our hearts.  There is some commentary from Alexander Mercouris 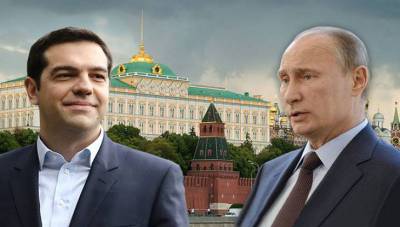 Some years ago Thomas Frank wrote a book, What’s the Matter with Kansas. The book is about how brainwashed Americans vote against their own economic and political interests.

The utter stupidity of populations makes them helpless at the hands of the rapacious. Today Thomas Frank could ask the same question about the brainwashed Greek population. On June 22, RT reported a huge rally of Greeks in Athens waiving the EU flag and demanding that their government sell them out to the troika. http://rt.com/news/268945-greece-rally-eurozone-summit/

The Greeks are so determined to be included in “Europe” that they are willing to be driven economically into the ground and to cease to exist as a sovereign state as the price of being in the EU. The idiots who participated in this “rally for Europe” have made it difficult, if not impossible, for the Greek government to soften the austerity that is being imposed by the One Percent on the Greek people.
Among Western people, the Greeks have experienced the heartlessness and greed of the One Percent more severely than any other Western people. Yet, the Greeks accept their mistreatment as the price of being European.
It is a wonder that Alexis Tsipras hasn’t resigned and damned the idiot population to hell.
Paul Craig Roberts warns Greek Government may be assassinated in this crisis if they pivot East to stop World War III

With people around the world worried about the escalating crisis in Greece and conflicts in the Middle East and Ukraine, today former U.S. Treasury official, Dr. Paul Craig Roberts, warned King World News that the Greek government may be assassinated if they pivot East to stop World War III.

“This would begin the unraveling of NATO. Very quickly Spain and Italy would follow. So southern Europe would desert NATO and so would Austria, Hungary and the Czech Republic. NATO is the mechanism that Washington uses to cause conflict with Russia. So as the EU and NATO unravel, the ability of Washington to produce this conflict disappears.

The Greek government understands that what is being imposed on Greece is not workable. Since the (implementation of) austerity the Greek economy has declined by 27 percent. That’s a depression. And they keep hoping that the Germans wake up one day and realize that austerity is not the way you cure debt, and that the Greek government cannot agree to conditions that drive the Greek population into the ground. They (the troika) are talking about (a) genocide (of the Greek population).

The Russians understand that Greece is being plundered by the West and met with the leader of Greece and offered him a deal. They said, ‘We’ll finance you. But not to pay off the German and Dutch banks, the New York hedge funds or the IMF.’”

Eric King: “Dr. Roberts, this touches on a point that you made during a February 4 (KWN) interview. You said:

“There is much more involved here with Greece than just the interests of the creditor banks, who still want to be paid 100 cents on the dollar. There is another strong interest and this is the interest of the centralizing European Union government and the interest of the European Central Bank as the policy-maker for all of the countries. So they are using the Greek crisis to establish that ruling power structure. That makes it difficult to make an agreement with the new Greek government to ameliorate the conditions imposed on Greece. So it makes the EU inflexible. That inflexibility gives Greece the cards to say, ‘We’re not playing your game. We’re going to play a different game and accept Russia’s offer.’”

Eric King continues: “This Greek drama has been incredible and you have been in front of this story the entire way. You were the first to predict that Russia would get involved and you predicted this deal wouldn’t (immediately) get done. But these threats that have been on the table are a bit terrifying if you are the Greek government because you are having to worry about being assassinated (if you don’t comply). Is that last part of the puzzle the reason why they haven’t been able to work with the Russians or the BRICS Bank? To (simply) default and say, ‘We’re not going to be debt slaves to the West (and the IMF). We’re going to set up our own currency. We’re going to reboot here and we are going to look to the East.’”

Dr. Roberts: “Eric, you summed it up very well. That’s exactly the case. It could well be that the Greeks know they can’t default and leave or they will simply be assassinated. This may have been made clear to them.

If You Leave The EU, You Are Dead

The troika has no interest in the facts of the matter. They have another agenda that we already discussed. And the Greek government has to see that there is no interest on the part of the troika to resolve the issue. That does suggest they understand that the real solution is not open to them. That they will not be permitted to leave the EU and NATO and make this deal with the Russians. I wouldn’t be surprised if they have simply been told, ‘You can make a good show of it, but if you leave (the EU,) you are dead.’

Will The Greeks Stand Strong And Save The Planet From World War III?

Otherwise there is this chance that the Greeks, by defaulting and leaving Europe, begin a process of unraveling NATO. Therefore, the Greeks have in their hands the ability to save the planet from World War III.” 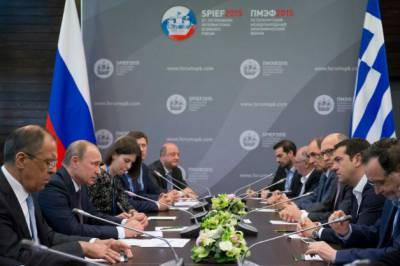 By repeatedly soliciting and then spurning Russian offers of help, Tsipras risks jeopardising Greece’s traditionally warm relations with Russia while antagonising the US and Europe

Russia’s offer of a pipeline came with an offer of a $5 billion prepayment. This was intended to buy Greece time to apply for a loan from the BRICS Bank. However the Greeks don’t seem to be embracing the offer.
Posted by seemorerocks at 12:47