Large numbers of bees are disappearing from hives. 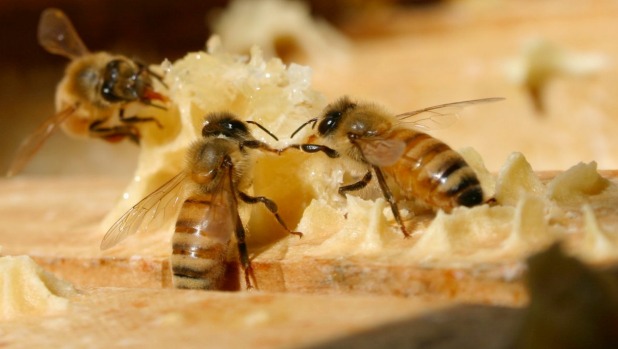 Independent scientists have identified a new parasite in bees on the Coromandel peninsula, one of several regions around New Zealand that have reported the loss of thousands of colonies of honey bees since last spring and a substantial drop in honey harvests since.

Lotmaria passim, a parasite that attacks the gut of honey bees, was only discovered by a team of American researchers about six months ago.

Its confirmed presence in Coromandel hives has rung alarm bells for beekeepers who fear another major biosecurity challenge for their industry, hard on the heels of the varroa mite which arrived in the North Island in 2000.

Beekeeping sources confirm bee losses on the Coromandel Peninsula last spring amounted to thousands of colonies. Reports suggest up to 95 per cent of bees in each hive disappeared without trace, with production losses of between 40 and 65 per cent for many large commercial beekeepers in the region.

The more virulent Nosema ceranae was only identified in western honey bees about a decade ago and first appeared on the Coromandel in 2010. It has been identified as a possible cause of colony collapse disorder (CCD) in the United States, although scientists debate that link because it is also found in healthy bee colonies.

Coromandel commercial beekeeper and scientist Dr Oksana Borowik said the disappearance of large numbers of bees from her hives between late August and early December 2014 happened very quickly and was devastating, with a 65 per cent loss of production.

When about 15 other beekeepers on the Coromandel met to compare notes, many reported significant unexplained losses of bees from the western side of the peninsula between Great Barrier Island and Thames.

"We've tested for pesticide exposure and we haven't found any evidence of that," Borowik said.

She found the pathogen Nosema ceranae in 50 of her hives - both healthy and sick hives - and started to look for some other cause.

With her background as a geneticist and bee scientist, Borowik wondered if Lotmaria passim, a pathogen only discovered by a team of researchers in the United States about six months ago, was present in her hives and possibly working in synergy with other parasites, such as Nosema ceranae.

"It is the first time it has ever been recorded here, probably because no-one has ever bothered looking," Borowik said. "We don't known if lotmaria is killing bees but we have identified it as another parasite."

"We're trying to identify what killed them and have to do further research to figure out what is going on, either in synergy with Nosema ceranae or on its own."

Plant and Food Research scientist Dr Mark Goodwin confirmed there was nothing to link the new pathogen to the disappearance of bees last spring on the Coromandel.

Goodwin said it was difficult to prove the cause of colony losses last spring because it was so long after the event, most of the bees had abandoned their hives and scientists could only sample the surviving bees that remained.

"We have some information but we are a long way from establishing what the cause is," he said. "We're talking thousands of colonies here. Beekeepers I've talked to have had between 40 and 60 per cent of their hives affected. It's really quite big numbers."

If a disease outbreak occurred in a hive, Goodwin said sick bees would often abandon the hive to save the colony, behaviour also observed in bee hives under threat from the varroa mite.

Of the Coromandel bee colonies that survived, he said bee numbers of most had recovered sufficiently to survive the winter but not enough to produce a honey crop. Scientists had joined some hives and found whatever caused the problem did not appear to spread from one hive to Юanother.

Scientists are reluctant to draw any links between the Coromandel bee losses and colony collapse disorder (CCD), which has been blamed for huge losses of honey bees in North America and Europe.

Goodwin said the description of bee losses here was "in some ways very similar to colony collapse disorder".

"The difference is in the timing," he said. CCD usually occurred in autumn while the Coromandel bee losses occurred in spring. "Whether that is significant or not, we don't know at this stage.

Borowik said there could be many reasons why bees were disappearing.

"CCD is just one of them but I don't have any evidence of that," she said. "There's no reason to raise the alarm because we don't know what's causing it."

Overseas there are antibiotics used for the treatment of the Nosema ceranae parasite, but they are not registered for use in New Zealand.

Scientists have advised the Ministry for Primary Industries of the discovery of the new Lotmaria passim pathogen in New Zealand and are working closely with the ministry sampling bees to try and establish the cause of bee loses.

In response to written questions, the Ministry for Primary Industries said it had invited other scientists and bee experts to collaborate on the investigation.

"Using new diagnostic techniques, they identified an organism (Lotmaria passim) not previously detected in New Zealand," the ministry said in a statement. "This organism is thought to have been first detected in Australia in the 1960s.  At that time the organism was not reported as being a major cause of bee mortality."

MPI said Lotmaria passim was likely to have been present in New Zealand for some time, and had simply gone undetected until the advancement in diagnostic techniques enabled scientists to detect it.  It said the importance of its detection here was not known.

The ministry said because the case definition for Colony Collapse Disorder (CCD) was very vague, it believed "it would be unwise to link the recent mortality events in regions of New Zealand, particularly the event in the Coromandel operation, with CCD."