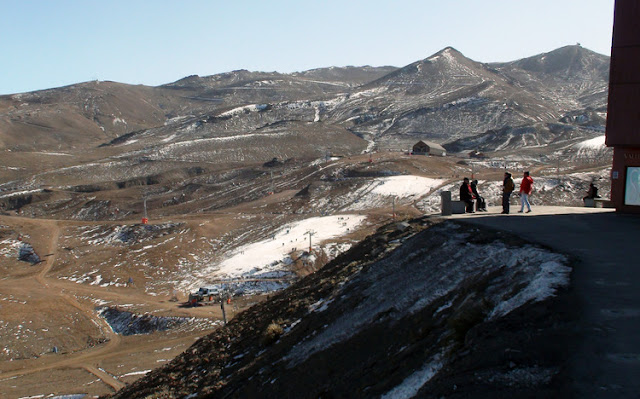 Haydee Pereira should be worked off her feet by this time of year serving clients at the Valle Nevado ski resort near Santiago. As it is, she has a lot of time to contemplate the mountains out the window -- and the absence of snow.

With 15 years’ experience working as a waitress at the resort, Pereira can’t remember the last time the slopes were this barren by mid-June. The only snow to be seen is the fake variety, put down last week for a photo shoot.

“In all my years here, the snow has never taken so long to arrive or the season so long to start,” Haydee said as she stood in the deserted restaurant.

Santiago, which sits below the ski resorts, has seen just 1.2 centimeters of rain this year,86 percent less than normal, and there is none forecast for at least another seven days. The situation gets more complicated for Valle Nevado and the other ski resorts in the Andes mountains by the capital in a week or so, when package tours start to arrive from countries such as Brazil.

People began skiing toward the end of May last year, with the resort officially opening June 14. This year there isn’t so much a shortage of snow, as a complete absence.

For now, Pereira is serving the few Brazilians, Mexicans and Colombians that come up to see the mountains in between games of the Copa America soccer tournament. They are rewarded with a view of the smog lying over the city below, pollution that has been able to build up due to the lack of rain. Authorities called a pre-emergency for Santiago Friday, banning one in five cars from the roads.

It shouldn’t be this way. According to Chile’s meteorological service, the Pacific coast of South America is experiencing a mild El Nino effect, the climatic condition that typically brings heavy rainfall with it.

“If we can’t start operating during the last week of June as is programmed, we have commercial policies that allow alternatives like the relocation of hotel reservations to another period of the same season,” said Francisco Sotomayor, head of Chile’s ski centers association.

Since 1968, 44 percent of the time the ski season has officially started after June 25, while it has been after July 1 in 25 percent of the years, according to Sotomayor.

The ski resorts around Santiago attract 600,000 to 700,000 people a year, with Valle Nevado accounting for about 300,000 of those. About 60 percent come from abroad, according to data supplied by the ski resort.

Central Chile has a climate similar to that in southern California -- and a similar drought that has now lasted eight years. The water shortage forced the Lake Tahoe area ski resorts in California to close early this year.

It is getting harder for ski enthusiasts such as Stefanie Schultz, a 23-year-old graduate from the University of Oregon, to find snow. Schultz paid an extra $100 to bring her skis to Chile this year, and hasn’t even bothered unpacking them.

“This pattern is happening everywhere in the world, not just in Chile,” Schultz said. “Every year, annual snowfall declines. This year ski resorts had to close early and Utah, Wyoming and Colorado also saw huge decreases in annual snowfall.”

This season rivaled 1976-77 and 1980-81 as the lowest North American snowfall season on record, with most California and Pacific Northwest areas receiving less than half normal snowfall, according to bestsnow.net.

Schultz is giving up and is bringing her return flight from Chile forward by a month to July.

“I will never forget that on July 5 two years ago, there was a huge snow storm, when there was already a lot of snow,” Schultz said. “At this rate, even if there is a huge storm like that, Valle Nevado won’t have enough snow to open many of the areas I skied that season.”