First big heat wave of the summer to grip Spain, France and UK 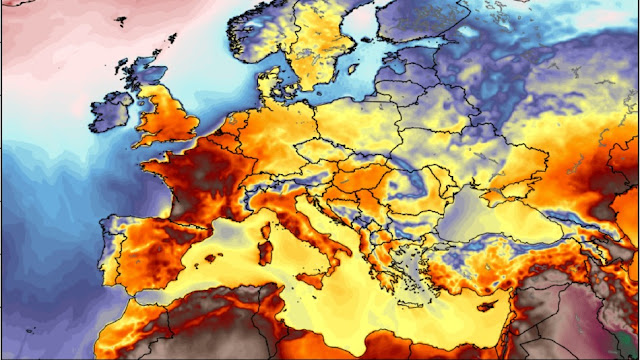 A heat wave is forecast to envelop much of continental Europe and the UK during the end of June into the first week of July, potentially setting records from Spain to England.

Competitors in the famous Wimbledon tennis tournament, for example, may have trouble dealing with temperatures that may reach the low-to-mid 30s Celsius (up to the mid-90s Fahrenheit) in the London area by next week.

SEE ALSO: Alaska is burning as fires multiply by the hundred

The heat will first build across Iberia over the weekend, before spreading its tentacles into the UK for the hottest weather of this summer so far. This weather pattern may herald a shift to a much hotter weather pattern, following a stretch of average to below-average temperatures.

It will be dangerously hot in Spain and France, with temperatures approaching or exceeding the low-40s Celsius (around 100 degrees Fahrenheit).

The UK's Met Office said in a statement that England will be near the boundary between the extreme heat from continental Europe and more moderate conditions with an ocean influence.

"Highs across southern Britain are likely to reach the low 30s Celsius, with a small chance of values in the mid 30s here," the Met Office said.

The heat wave is not a sure bet, however, as the Met Office said, "It’s worth saying that there is some uncertainty about how much of the hot weather from the continent will reach us, and it may only last a couple of days before temperatures drop a little. As is traditional with hot weather in the UK in the summer, it may end with thunderstorms."

The heat may be a far bigger story, as well as a public health threat, in France, Belgium, the Netherlands and Germany, if computer model projections are correct and the weather systems responsible for the hot weather slide east with time.

Posted by seemorerocks at 15:39