Is there a solar revolution? Time for data, not adjectives 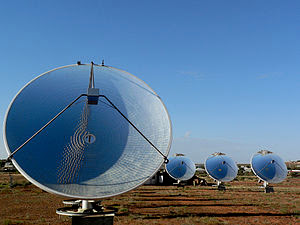 Solar power is disruptive, growing exponentially, fill in the blanks. This is what you will believe if you spend too much time reading optimistic articles on clean tech websites, and less time looking at actual statistics for solar generation.

In reality solar power’s heavily subsidized growth is nowhere close to being the revolutionary force some of its advocates claim it already is. It is also not growing exponentially, as anyone could see if they checked the meaning of the term exponential growth and actual statistics for year on year growth rates.

Anyone confidently predicting continued exponential growth of solar will have a hard time accounting for the actual decline in growth in Europe.

Growth of solar can be put in further perspective by comparing the annual growth (in TWh) with the total electricity consumption of a country. Let’s imagine that in a single year a country went from 0 to 1% of electricity generation being from solar panels. That would mean it would take roughly 100 years to get to 100% solar.
Obvious caveat: we don’t know what to do when the sun goes down, but you get the thrust.

So, how quickly is solar growing globally? Below is a chart showing the top 25 countries in terms of solar growth last year. Growth is measured by comparing absolute growth of solar (in TWh) with total electricity generation (in TWh).

Number 1 is Greece. Now, exactly why heavily indebted Greece is number one in the growth of a heavily subsidized source of energy generation can be debated, but the fact remains.
Most importantly, no major economy is above 1%. At current rates of solar additions they are all many many decades away from solar power taking over. And remember: many of these countries, e.g. Germany, are now seeing reduced rates of absolute solar additions.
Growth in solar energy in China now attracts a lot of optimistic headlines. However, the increase in solar energy last year represented only 0.2% of total electricity generation. In other words, if China kept increasing solar’s share at that rate it would take half a millennium to get to 100% solar electricity. Keep this in mind when you see misguided headlines about solar power having a major influence on Chinese air pollution.
Focusing on electricity generation alone of course is problematic. The underlying reason to switch to solar power is climate change. And the majority of fossil fuels are not used for generating electricity, but for heating, flying, shipping, making steel, and so on. What we really should look at is total energy consumption.
The growth of solar is much slower in terms of total primary energy consumption. Growth in solar in 2015 was less than 0.5% of total primary energy consumption in all major economies.

These numbers should make it clear how far we are away from a solar revolution. The figure for China and the US is 0.1%. If China and the US added solar at a rate ten times greater than they are today, then, it would take them a century to get to 100% solar.
In Germany, where a supposed solar revolution has occurred, the figure was 0.29%. 100% solar is a mere three centuries away in that high latitude, cloudy country……. where the sun still goes down.