el-Nino in the Paific - a report

I apologise for the wonky formatting. This has been very difficult to put together. I have even written text that has, when I have come back, disappeared, text changes size or color.

But at least the information is there.

El Nino weather system to pack a punch in Pacific 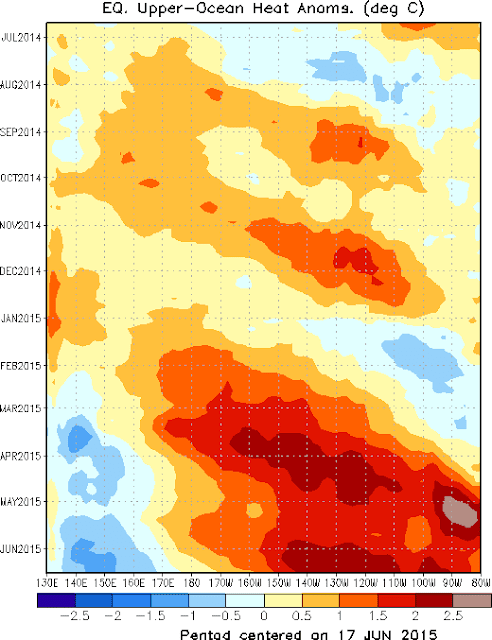 Warm water propagation through the upper 300 meters of the central and eastern Equatorial Pacific serves as oceanic fuel for El Nino events. In the above graph by NOAA, not one but two warm Kelvin Waves are indicated — one peaking during April and May, and a second ongoing now. Will a significant westerly wind burst, now lighting off in the Western Pacific, generate a third warm Kelvin Wave by August? Image source: NOAA’s Climate Prediction Center.

News has come through Robertscribbler that may have great repurcussions, especially for the South Pacific. 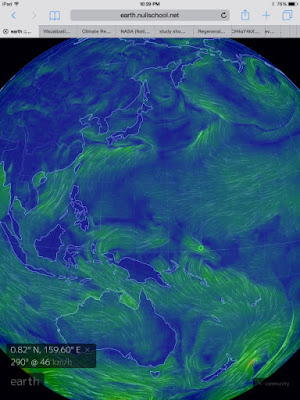 
"Last week, a set of climate models predicted the emergence of a large and moderately strong westerly wind burst running against the trades associated with an eastward propagating cloudy and rainy phase of the Madden-Julian Oscillation (MJO). And, over the past few days a moderate strength, but very wide-ranging, westerly wind pattern appeared....

"Today, 20 to 35 mile per hour westerly winds are prevalent along a 2,500 mile stretch of ocean running from just east of the Philippines, across an equatorial zone just north of New Guinea, and on eastward for hundreds more miles in the direction of the Date Line.

These ... "are predicted to strengthen to near gale force intensity. But it’s the size of the zone that may have the greatest impact.

"Strong, long-fetch westerlies in this region of the world have a tendency to push warm surface waters, now topping off at 31 degrees Celsius (and 1-2 C above the already hotter than normal 1979 to 2000 average), downward and eastward. This heat pump action generates what, in meteorological parlance, are known as warm Kelvin Waves. And warm Kelvin Waves are high energy fuel for strengthening El Ninos"

We have heard news of increasingly extreme weather, from unprecedented heat and wildfires in Alaska to over 800 deaths from a deadly combination of heat and humidity.

One area of the world that is right in the  middle of climate change and the intensifying el-Nino phenomenon is the Pacific - and yet there is a worrying paucity of information from that part of the world.

I have collected what I could find during a morning's search and am sharing this with you.

I intend to look into this further and intend to bring further updates.

The following is a general picture of the el-Nino phenomenon 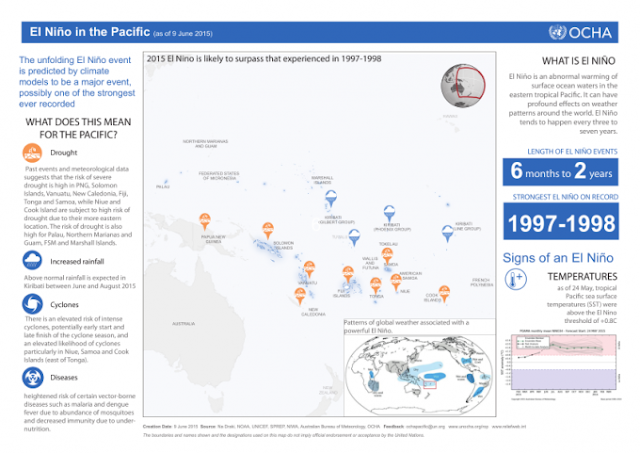 The unfolding El Niño event is predicted by climate models to be a major event, possibly one of the strongest ever recorded

WHAT DOES THIS MEAN FOR THE PACIFIC?

Past events and meteorological data suggests that the risk of severe drought is high in PNG, Solomon Islands, Vanuatu, New Caledonia, Fiji, Tonga and Samoa, while Niue and Cook Island are subject to high risk of drought due to their more eastern location. The risk of drought is also high for Palau, Northern Marianas and Guam, FSM and Marshall Islands.

There is an elevated risk of intense cyclones, potentially early start and late nish of the cyclone season, and an elevated likelihood of cyclones particularly in Niue, Samoa and Cook Islands (east of Tonga).

heightened risk of certain vector-borne diseases such as malaria and dengue fever due to abundance of mosquitoes and decreased immunity due to undernutrition.

The following account from Vanuatu paints a picture of

how things are in many parts of the Pacific

Strange weather patterns disrupting food supplies is a critical issue in the Pacific.  Fr Denis Revi from Vanuatu says it’s the number one environmental issue for his country.

It’s hotter than it used to be and some places in summer may experience no rain. Villages rely on the rain for water. When people can’t grow certain crops because rain hasn’t fallen as expected, there is a shortage of food, and people have to buy it at higher costs.

Here are some items relating to drought and climate change-related items from individual countries in the South Pacific.

Tuvalu drought could be dry run for dealing with climate change 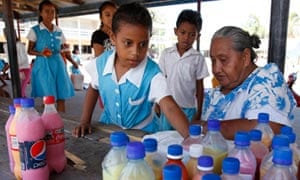 These two videos, produced locally, give a good account of the issues relating to Tuvalu

This short documentary explores how climate change is affecting access to water and drought in Tuvalu. Rising sea levels have led to saltwater intrusions, affecting groundwater, the main source for the daily freshwater needs for Tuvaluans. It was created by Onorina Saukelo of the University of the South Pacific as part of the Action Against Climate Change (A2C2) project, initiated by the Pacific Media Assistance

Tuvalu, more than perhaps any other Pacific nation is threatened by climate change and by sea level rise.

Much of the atoll was under water in the recent cyclone and now half the population is displaced and has lost its crops and is threatened by disease, and yet there has been little media coverage.

Water supplies reach needy Tuvalu atoll
A Red Cross official in Tuvalu says they have got drinking water to Nui island but more will be needed soon in the wake of damage caused by Cyclone Pam. 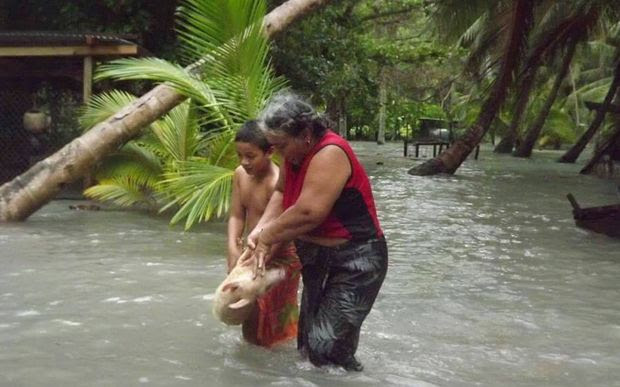 
Vanuatu disaster: the island hit by an earthquake, a volcano then cyclone Pam 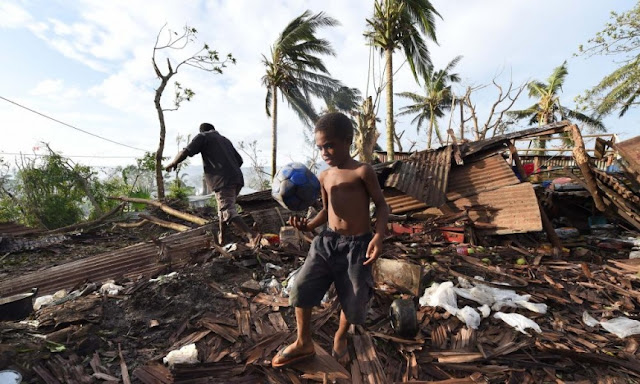 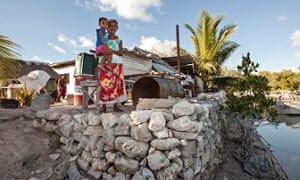 About thirty thousand people living on Kiribati's southern islands are having to carry water some distance for household use.


The government says it will intervene if the current drought continues. Fruit trees including taro and coconuts are the worst affected. Coconuts for copra production is the only source of revenue for the outer islands. Director of Kiribati Meteorological Service Moreti Tibriano helped develop the government's strategic drought plans

'They say that in 30 years maybe Kiribati will disappear'


On the tiny coral islands of Kiribati sandbags hold back the rising sea and drought means no fresh water. For the Pacific Islanders living at the sharp edge of climate change any result in Lima will be too little, too late


El Nino has arrived in Tonga bringing cooler nights, the Ministry of Meteorology said in a statement yesterday, 14 May.


El Nino, the movement of warm ocean water from the north of Australia to South American crossing the Pacific Islands every three to seven years, changes the weather patterns in many countries.


For Tonga, El Nino usually brings cooler night time temperatures from May to October, less rainfall from November to April and more cyclones than usual.


Meanwhile, drought conditions are currently being experienced throughout Tonga, and drought warnings are now in force for all of Tonga. Drier than normal conditions are also expected during the next six months.

Rainfall across the country was very low during April. Fua’amotu recorded 17.1mm of rainfall which is the lowest April rainfall in its record in 36 years.

Nuku’alofa recorded 28.9mm which is the 3rd lowest April rainfall in 71 years.

A working group has been established in Tonga to respond to the current drought conditions. 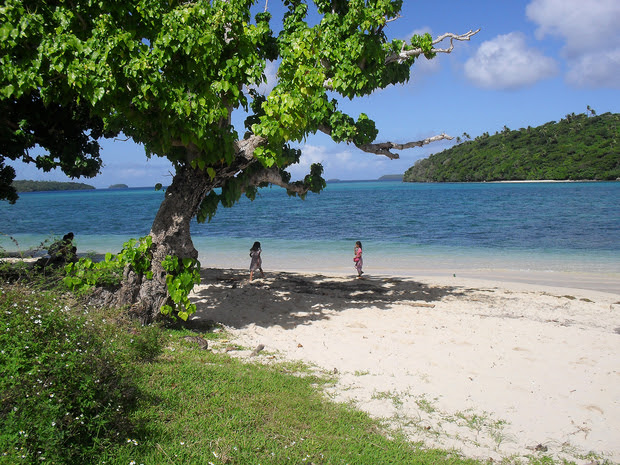 The director of Meterology in Tonga, Ofa Faanunu, says Tonga is coming into its dry season, but has already been experiencing drought conditions for eight months.

He says some of the smaller islands, which depend entirely on rainfall, had to have water shipped out to them last year.


Mr Faanunu says the national emergency management committee met last week to discuss the conditions, and a working group was set up.


"We've recorded the driest April in our records here in Tongatapu. With the forecast as it is, we are taking precautions and trying to come up with measures and trying to mitigate the effects of this drought, if it will continue."

Ofa Faanunu says they expect drier than normal conditions during El Nino periods, and they will be preparing for the long term when when the working group meets this week

The Tonga Metservice says it is critical for Tonga's smaller islands that the effects of an ongoing drought are mitigated.

The director of Meteorology in Tonga, Ofa Faanunu, says Tonga is coming into its dry season now, but has been experiencing drought conditions for eight months.

He says last year 80 percent of squash and pumpkin crops were destroyed by the drought, and water had to be shipped to Ha'apai and Vava'u.

Mr Faanunu says Eu'a is also experiencing water shortages, which the government is trying to respond to.

"A lot of livelihoods depend on rainfall. A lot of our smaller islands don't have ground water and depend entirely on rain water. So if for the next three months we continue to have drier than normal conditions, it will be critical for our smaller islands."

Ofa Faanunu says they are asking the public to collect as much rain water as possible, and not to be wasteful with it.

A four-month drought in the central Tongan island group of Ha’apai is putting stress on drinking water supplies already diminished by saltwater intrusion.

Some people – especially women and children mostly affected by the water shortage – from the more remote communities are needing to travel long distances (into central Pangai) to get water from churches and schools who have a more secure water supply. This is putting extra strain on those other sources.....

Villages in the area had very minimal rainfall during the last wet season in June and July and are now experiencing water shortages,’ says Leo Duce of Caritas Aotearoa New Zealand.

‘These communities have been aware of weather pattern changes and have asked Caritas to support them with the establishment of traditional and commercial water collection systems to collect water in the next 2-3 months when more rains are expected.’


This film on climate change in Tonga is 4 years old 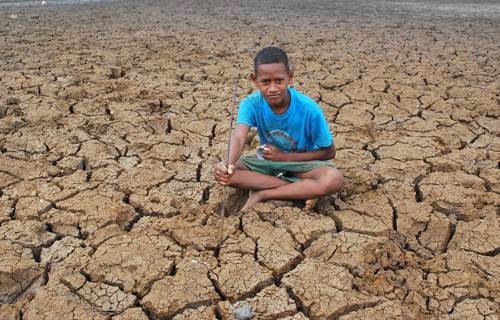 Reports from Fiji say the country is rapidly approaching a state of drought, with no substantial rainfall since the 17th of May.

The director of the Fiji Meteorological Service, Alipate Waqaicelua, says there is no indication that rain will arrive soon.

A meeting today is expected to decide whether to declare a drought.

The Fiji Water Authority CEO, Opetaia Ravai, says the situation is under control and there are no official water restrictions in place yet.

But he says two of the three main water sources supplying Suva are below the critical level, and many in western residential areas need supplementary truck deliveries of water.

He says some rural villages and outer islands have also requested water deliveries and this is being barged to them by the Government.

Mr Ravia says the MET Service has reported the dry spell will continue until January next year.

A report from the Fijian meteorological service - 15 May, 2015

The peak months for the dry conditions are expected to be from June to August.

Most parts of the country experienced drier than normal conditions over the last three months, from February to April 2015 Rainfall was below normal over majority of the Western Division during the last Wet Season from November 2014 to April 2015.

Consequently, majority of the country are currently in either a warning state for meteorological drought or in a drought at all three timescales that FMS monitors drought, that is, 3, 6 and 12 month timescale (Table 2). The drought conditions may not be so apparent at present time, but this situation may become more visible as we progress into the Dry Season.