This is the bottom of the North Island - north of Wellington that has been affected, on the west side of the island 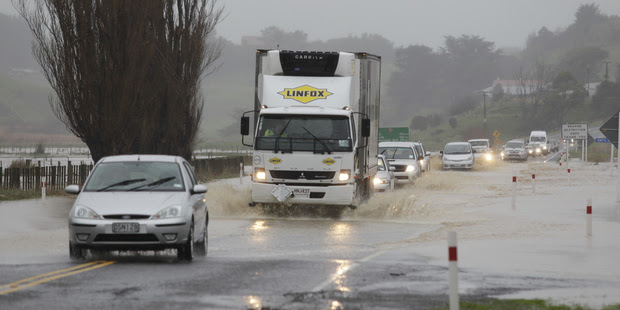 The Whanganui River is expected to peak at about 9 metres at 1am tomorrow and authorities fear it may breach stopbanks in the east of the city.

Kapiti, Horowhenua, Whanganui and Taranaki are among the worst affected areas after the storm, that brought heavy rain and snow to much of the South Island yesterday, moved north last night.

Whanganui Mayor Annette Main said declaring an emergency meant authorities could force residents who are reluctant to leave their homes, to evacuate.

About 50 people have already been evacuated today in Whanganui and another 100 were asked to leave after the state of emergency was declared at 4pm.

Ms Main some had been put up in hotels but most had chosen to stay with friends and family.

The Whanganui District Health Board is asking nursing staff who can get to the hospital to call in.

People have also been evacuated in the nearby town of Feilding.

Councils in Horowhenua, Manawatu, Whanganui and Taranaki have activated their emergency management centres, including evacuation facilities.

Over 4000 properties in Whanganui and South Taranaki were without power and could be for some time because of slips blocking access for repair crews.

He said other rivers being monitored included: the Mangaone Stream west of Palmerston North, the Oroua River near Awahuri, and the Whangaehu River. 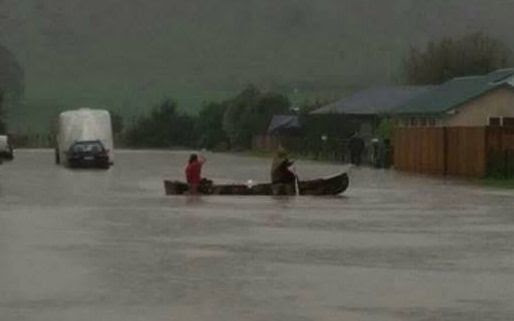 Flooding - what you need to know

Earlier today, about 20 people in Feilding had left their homes for a welfare centre in the town.

Manawatu-Wanganui Regional Council incident controller Craig Grant said floodwaters had breached a stop bank that was causing problems for nearby properties in Feilding.

"The main area of concern at the moment is the breach at Queen Street - so the area downstream of that have been affected is where the main evacuation is occurring."

Mr Grant said if people feel they need to leave their properties they can head to the welfare centre on Bowen Street.

The council warned people not to walk or drive in the floodwaters unless it is an emergency.

It was keeping an eye on several others rivers in the region, including the Manawatu, the Whangaehu and Feilding's Makino Stream. 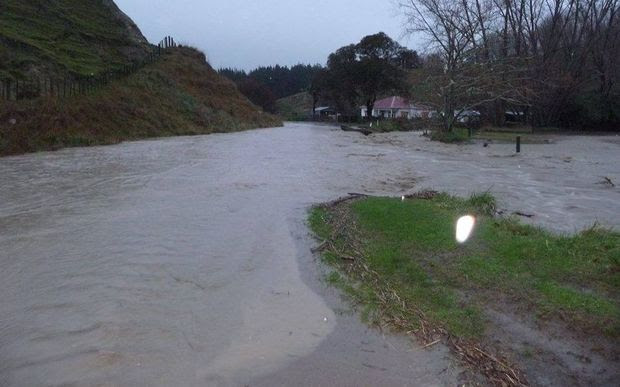 It had opened floodgates and has observers at key points.

Whanganui residents are being warned to treat all flood waters in the district as contaminated following the reporting of sewage and stormwater spills.

The city's water supply is now being reduced, while power is cut to bores.

Whanganui resident Jacob Mancer said he had been able to get around by kayak.
"Woke up to mum yelling and screaming saying that house was surrounded by water.

"Where we are you wouldn't think we'd get much flooding, but it ended up being knee-deep." 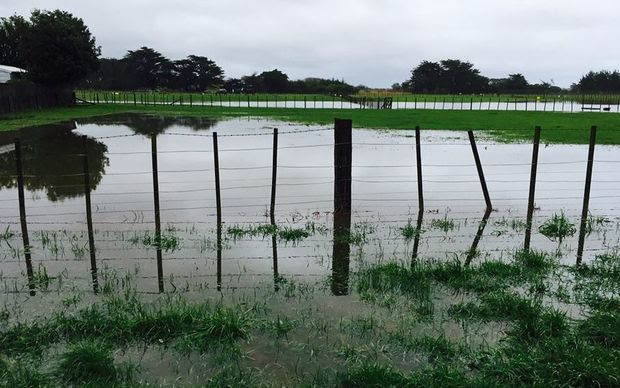 The council said people should stay tuned to their radios and monitor the Civil Defence Manawatu Wanganui Facebook page for updates.

Horowhenua Mayor Brendan Duffy said the biggest challenge was dealing with the massive volumes of water.

He said sand-bagging was underway, and work has begun to pump the water away.

In Taranaki, people were being warned to stay out of central New Plymouth as floodwaters overwhelm the sewers.

New Plymouth District Council has shut down pumping stations in Waitara, Bell Block as well as in the city.

That meant raw sewage was being discharged into the sea and the Mangati Stream and floodwaters in the town centre was contaminated.

The Transport Agency urged people to avoid travel around the lower North Island, if possible.

Click here for all of the latest roading and weather information

There are numerous road closures, with just one route for traffic heading north out of Wellington and that's via State Highway 2 to Hawke's Bay.

Many other smaller regional roads are also closed and the police are inspecting roads for safety.

Police Inspector Ross Grantham, who is co-ordinating the police response, urged extreme are.

"We would ask members of the public, if they don't have anywhere to go today, to stay home, look after themselves and keep the roads as free as possible."

Outages may last for some time until slips were able to be cleared, police said.
Floodwaters damaged a bridge on State Highway One north of Manakau in Horowhenua and the highway was closed overnight.

Police said the bridge may be closed for up to 36 hours.

Structural engineers were on their way to assess the damage motorists were warned to expect major delays.

About 35 properties were left without water after the bridge was washed out as a water main was severed, and work was underway to repair it this afternoon.

MetService said there would be even more heavy rain for the central and lower North Island tonight.

It also said up to 130-millimetres could fall on the ranges of the Eastern Bay of Plenty and Gisborne overnight.


Another cold night without power in Canterbury 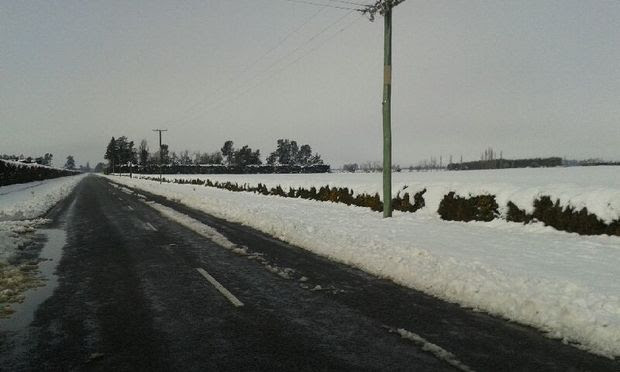 Lines companies in Canterbury are warning some customers that they may have to spend another night without power, as they work to reach the thousands of homes cut off due to the heavy snow dump.

Posted by seemorerocks at 18:57