I think we can ignore the bit about the geoengineering, but the rest of the report is explosive (pardon the pun). 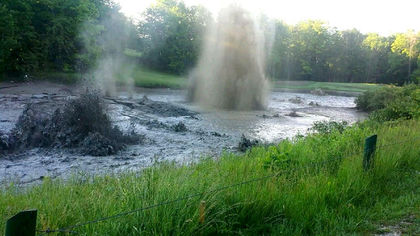 Photos, videos and email tips can be mailed to tips@allnewspipeline.com

In the absolutely amazing 1st and 2nd videos below, we see a pond on a golf course in Canada exploding in gas bubbles in a scene that looks more like a volcano preparing to erupt than something we'd expect to be seeing at the 2nd hole. The Winnipeg Sun said it "looked like a vision from hell, if hell was a golf course" and as we quickly learn here in the 2nd video, a news program about the 1st video, we're witnessing methane bubbling up out of the ground, just the latest such eruption around the planet, as we quickly race towards hell on Earth.

After watching these videos, ANP urges you to read the warnings given to us by Dane Wigington in his new story called "Planetary Meltdown From Formerly Frozen Methane, If You Are Not Alarmed, You Should Be" and as shared in the 3rd video below called "Extinction Level Arctic Methane Releases Caused By Geoengineering." What we are witnessing here is unprecedented and if we're not alarmed, we learn real quickly we definitely need to be! Much more below videos.

According to Dane Wigington, our planet is changing at such a blinding speed that before long, it will no longer be able to support life. He tells us bluntly that we are on the edge of extinction: If there is not a complete course correction in regard to human activity, total near term global extinction is a mathematical certainty. ANP published a story yesterday called "Elite Call Humanity 'The Walking Dead' As They Warn 'The Next Great Extinction Is Here' Before Running Off To Their Bunkers." Maybe Paul Ehrlich of Stanford U knows more than we give him credit for when he tells us our time here is running out.

Susan Duclos recently published a story on ANP in which she warned that our planet Earth is becoming increasingly unstable with a massive uptick in earthquakes and 'violent' volcanic activity across the world. We need to understand that all of the events we're witnessing across the planet are clearly connected. As we learn from Wigington if we're paying attention, our planet is in total meltdown and the ongoing global geoengineering programs are making the situation WORSE, not better. We're told: "Methane is releasing at an ever increasing rate from lake and sea beds around the globe, especially in the Arctic."

We can now add Canada, and only MILES away from the US border, to the locations where methane is now bubbling up - and completely out of human control as the state of emergency they declared there proves. The chart below is mind numbing. The video below the chart is absolutely sobering. The pictures below that video are quite thought provoking and show us in more visual images exactly what we're now dealing with here now and why we're so in danger.
Atmospheric methane is virtually skyrocketing past pre-industrial levels. As methane releases, it fuels "climate feedback loops" that trigger even more methane release. 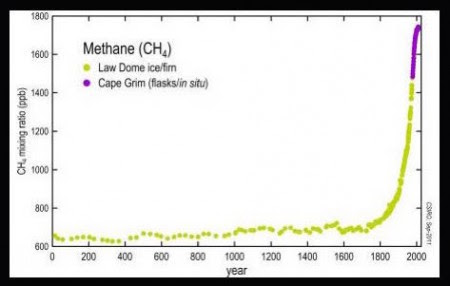 The exploding pond at the Indian Hills Golf Course in Lambton Shores, Ontario, Canada is on Lake Huron and is only 25+ miles from the US border in Michigan as seen in this Google Earth screenshot bottom right.

Wigington tells us that our 'industrialized/militarized civilization' has  no regard for the natural world, nor does it care for the 'miraculous life support systems' of our amazing planet Earth and our once-thriving biosphere. In a race to fix what we've destroyed, geoengineering is blowing up in our faces and actually quickening what we're watching unfold.
"There is one form of anthropogenic activity that stands out above all others as the epitome of human insanity, climate engineering."


Imagine if the pond in Canada erupting now in methane was covered in ice; is this what it would look like? As we see in the 2nd image below, we could catch it on fire! 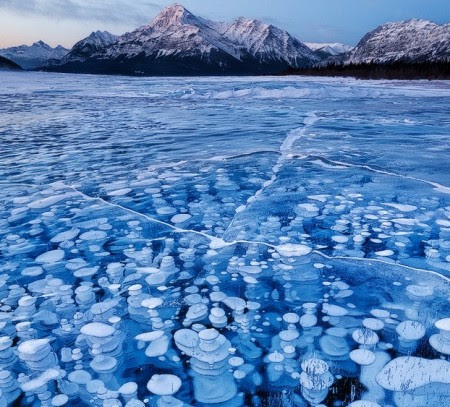 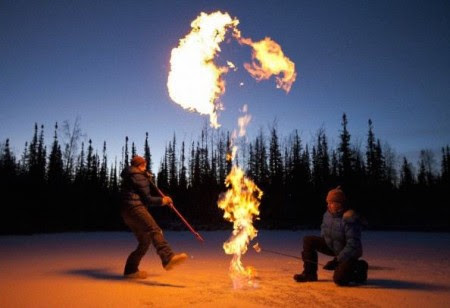 These mysterious holes in Siberia were also caused by massive methane releases. 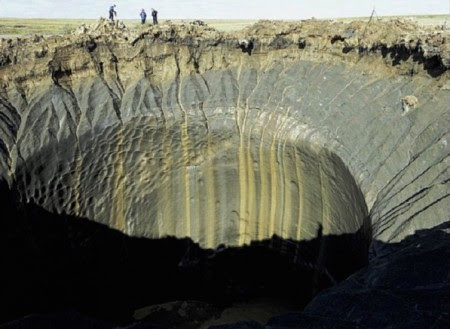